Medium length stage, quite tiring due to the differences in height and the two steep climbs (especially the one on scree, at Quintino Sella): should not be underestimated.

The route is absolutely spectacular, mostly in front of the Monviso (3,841 m), one of the most significant peaks in the Alps. We drink at the source of the Po. At the Rifugio Quintino Sella you can breathe the air of a myth.

The stage, although short, has two significant climbs, with an overall positive difference in height that should not be overlooked. The ascent to Rifugio Quintino Sella takes place mostly on scree: in case of fog, the less experienced hikers can easily get lost.

The only water point is at Pian del Re (not just anyone: the source of the Po!)

We take the GTA path again. After a very short stretch on the plateau closed by the Inchiun Rocks, we begin a long climb between the larches (approximately 800 m height difference), decisive but constant, and on a good path, up to the Colle della Gianna. After passing the ridge of Colle Proussera, the path flattens for a while giving us time to catch our breath. We face the last slope in the debris and we are at Colle della Gianna (2,531 m), which separates Val Pellice from the Po Valley. The view of the Monviso is superb.

We start the descent (approximately 500 m drop) towards Pian del Re, detaching ourselves from the GTA, which descends to the left, towards Pian della Regina. After the initial hairpin bends, the path runs agile between grassy inclines, the slope is never extreme. Once in Pian del Re (where we find the GTA), we cover a short stretch of paved road. It is worth making a small detour and stop at the Rifugio Pian del Re (built in 1874, the first in Italy), enjoy the dishes and the stories of the very nice Aldo Perotti, grandson of the first manager of the Rifugio Quintino Sella.

We leave Pian del Re and begin soon the second ascent (approximately 600 m height difference), passing through the historic sources of the Po. We are on the Giro di Viso hiking trail.  While catching our breath, we skirt the beautiful Lake Fiorenza and attack the next climb, dominated by the ever-closer Monviso. The climb becomes increasingly tiring: the path is on scree (although without technical difficulties). We cross Lake Chiaretto with a wide circle and face the last stretch, entering the valley between the western side of Viso Mozzo (3,019 m) and the eastern face of Monviso. Finally, the track flattens and nearby we now see the Rifugio Quintino Sella and the underlying Lake Grande di Viso.

From the historic, large mountain lodge (2,640 m), we enjoy one of the most famous views of the Alps. Monviso is gigantic, vertical: the King of Stone (3,840 m). You can breathe the myth.

The ancient Romans believed that Monviso was the highest peak in the Alps (and therefore in the world known at the time), because of its sharp shape and the fact that it was visible from everywhere, more than any other mountain.

In August 1863, the then Minister of Finance Quintino Sella climbed the Monviso together with a Calabrian parliamentarian, Baron Giovanni Barracco, to symbolize the unification of Italy. The climb marked the birth of the Italian Alpine Club, of which Sella was the founder, on 23 October 1863.

Eclectic character, primarily a scientist with a strong love for mineralogy (his axonometric drawings of crystals are still used today), Quintino Sella was three times minister of the Kingdom of Italy. He passed on his passion for mountaineering to his children and grandchildren, among which his grandson Vittorio Sella stands out. He was an amazing high altitude photographer and author of important climbs, including the first winter ascent to the Matterhorn.

At Pian del Re we find a plaque that indicates the Sources of the Po: its 652 km makes it the longest river in Italy and the fifth in Europe.

The Po crosses the entire fertile Po Valley, of which it is largely the "creator": a significant portion of the area that constitutes the river basin was in fact 'built' by the river itself and its tributaries, which transported land and debris from the mountains, thus filling an ancient sea gulf and forming the present plain.

Even today, the river continues to transport land and continues to expand its delta, which advances into the sea at a speed of over 50 m per year.

In the Monviso Park and in particular, in the peat bog surrounding the sources of the Po, it is widespread the now very rare Salamandra di Lanza, that has reached here a population of about 300 specimens.

The apple fritters, called binhëtta dë poum, are a delicious dessert typical of the Po Valley.

Bivacco Bertoglio, just above Lake Bertin, along the route of the next stage (about 2 hours from the Quintino Sella Refuge; 9 beds, blankets. Always Open

The nearest town reachable by bus is Bobbio Pellice, starting from the city of Turin. 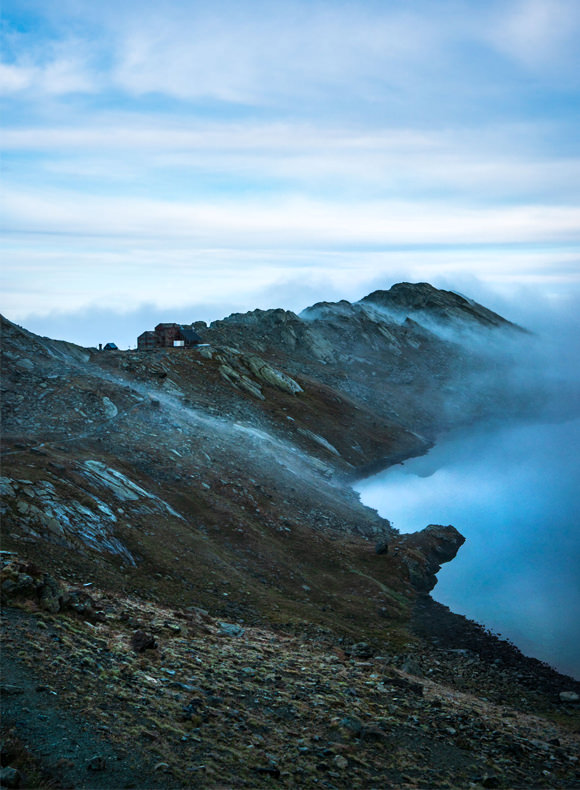 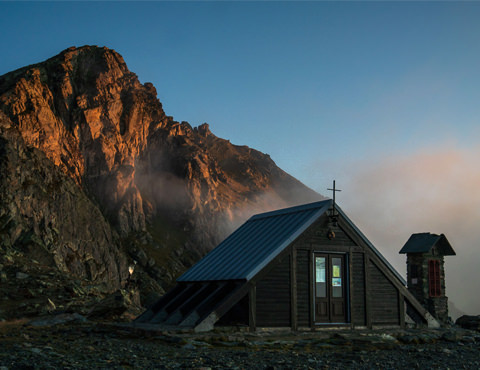