An extremely demanding stage, suitable only for the most trained hikers, due to the length and the two long climbs.

The view of the Cime Bianche and the Dens d'Hèrens are the remarkable outline of the protagonist of the day: ladies and gentlemen, the Matterhorn (4,478 m, third peak of the Alps).

The stage is a variation of the Sentiero Italia (which passes through the Col de Nannaz, under the Grand Tournalin), preferred for the extreme beauty of the Vallone delle Cime Bianche and the incomparable view of the Matterhorn.

The stage does not present any technical difficulties but is really tough because of its extreme length and challenging gradients: to be tackled in full only if well trained. It is, however, possible to break it by stopping in Cervinia or Valtournenche. Either way, it is good to leave early in the morning.

You leave the cross path of the Pista Condotte Forzata and pass the Manda stream, at this point you face a stretch in which the path is almost non-existent and invaded by vegetation, be very careful.

Water points are absent from the Rifugio Fiery (shortly after Saint Jacques) to  Lake Loz.

MTB: this stage can be covered with push sections only up to Valtournanche.

We immediately begin the first, long climb (approximately 1,300 m height difference) along the Alta Via 1. After passing the nearby Rifugio Fiery  (last water point up to Valtournenche) we ascend on a good track in the woods, without sudden climbs. From Alpe Ventina onwards we leave the trees, and, shortly afterward, the slope decreases: a valley opens up which we travel on a slight slope, sliding, crossing several streams of water. In front of us, the beautiful Cime Bianche stand out, the benevolent guardians of the valley, among which the small rock tooth of Bec Carrè (3,003 m) stands out.

After a few ramps, we arrive at the Gran Lago, with its intense color. We then face the ramp towards the pass, perhaps the most demanding stretch of the climb, even if well beaten. We arrive at the Passo di Cime Bianche (2,982 m): the view opens up to the enormous south face of the Matterhorn (4,478 m), which stands proudly. Beyond it, the Dent d'Herens and the rocky wall that descends from it. To the east, the Western Breithorn (4,164 m).

We begin the descent, first on scree, on an easy path, following the ski lifts. Overcome the Goillet Dam, instead of continuing downhill (unless you want to stop in Cervinia, very touristy) we take the path that, in a long cross path, overlooks the eastern side of the Valtournenche along an ancient mine railway. The stretch is panoramic and relaxing. We pass a small votive shrine (in front of which John Paul II also stopped) and, after Alpe Verser, we cross a large plain, from which we begin to lose altitude. The stretch is not very beaten and covered with vegetation, it is necessary to be careful. We arrive on an asphalted road, we follow it for a while and then we return to the path, very clear, which descends easily (but firmly) to the beautiful Lake Loz.

We quickly arrive in Valtournenche (where the most tired ones can interrupt the stage, there are several structures). After the built-up area, we face the last climb, demanding because it is long and tense (about 600 m height difference), but without difficulty. The last part is in front of the Cignana dam, afterward, we are at the Rifugio Barmasse, not far from the large lake.

The summit of the nearby Monte Pancherot is perhaps the best terrace on the Matterhorn: if we go to bed early, we can go up to enjoy the sunrise that colors the Grande Becca.

The Matterhorn (4,478 m, third peak of the Alps) represents one of the most complicated peaks in the Alps, due to its verticality and uncertain rock.

It was the scene of historical mountaineering exploits, starting with the first, controversial climb, which took place in 1865 by the Englishman Edward Whymper (who preceded the Italian Jean-Antoine Carrel by two days).

However, in living memory, the most extreme feat that took place on its walls was that carried out by Walter Bonatti in 1965: the King of the Alps climbed the North, in winter and alone, through a new route. It was his indelible salute to mountaineering, a hymn to courage and adventure.

The Barmasses, among the greatest mountain guides in our country, have been a point of reference for world mountaineering for four generations. Today the family tradition is carried on by the famous mountaineer Hervé Barmasse.

Ibex, chamois, ptarmigan, and golden eagles are the fauna species of these horizons.

The landscape of the upper Valtournenche is dominated by glaciers, cliffs, and moraine deposits. Here the vegetation reaches the highest altitudinal limits of the Alps, with species that grow above 4,000, such as the glacier buttercup, the Alpine rock-jasmine, the saxifrage with opposite and musky leaves, the meadow-grass.

Furthermore, the evolution of ancient lake basins has created wetlands such as that of Vardaz, populated by particular hygrophilous species.

The hearty Valle d'Aosta soup is the best way to recover from the fatigue of the walk: stale bread, broth, onions, and the inevitable local fontina - a jubilation of flavor.

In Cervinia and Valtournenche there are several accommodation facilities

Starting point reachable by bus, starting from the city of Aosta with a change in Verrès . 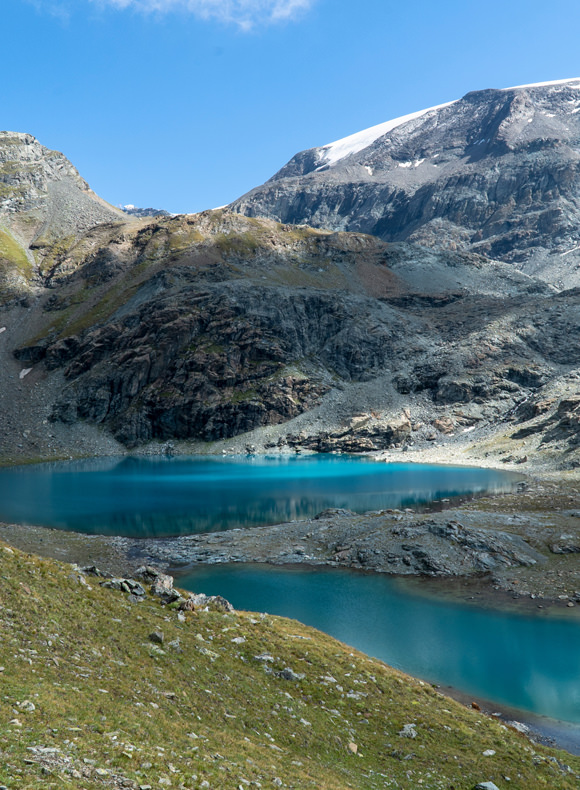 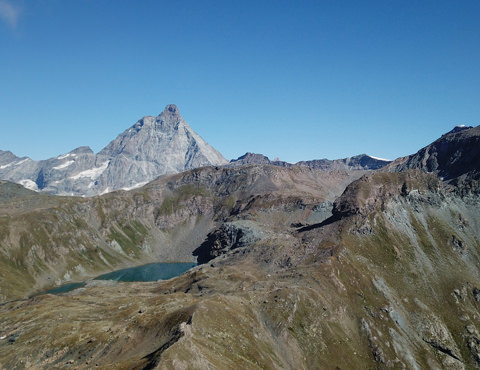