A stage of medium length and with a smooth trail; we cross the Tronto Valley and pass from the Sibillini Park to the Monti della LagaPark, returning to the Marche region after the short break in Accumoli, Lazio.

The original path of the Sentiero Italia passes through the Capodacqua and Tufo hamlets, currently unusable due to the earthquake: it is recommended to follow the track provided here.

The signs are not always present along the route. The trail signs are present but not always evident: keep an eye on the GPS track.

The only water point is a few kilometers before arriving at Colle d'Arquata, on the paved road that precedes it (once you reach it from the path, you have to follow it to the left for about 200 m instead of immediately turning right as per the track).

We leave the Agriturismo Alta Montagna Bio and take the road just above it, to the right. We follow the road for a long time, along the hillside, with slight ups and downs, slightly losing altitude. After 4 km scarce, passing the Fonte Martina, we start the descent (approx. 300 m drop) towards Grisciano, alternating sections of a steeper path with an old mule track in the woods, until we reach an asphalted road that we take to the right. We resume the path on the left to cut the hairpin bend and quickly descend to Grisciano.

Passing the bridge and the few houses, we return to the path and begin the long climb (approximately 300 m height difference) towards Colle. We advance in the dense woods, along a dry stone wall that once marked the border between the Papal State and the Kingdom of the Two Sicilies. The climb is sometimes tiring but does not present particular difficulties.

Back on the road, we can find a source of water by turning left and continuing for a few hundred meters. Retracing our steps, we continue on the level road up to the church of San Silvestro, shored up after the earthquake; a very short descent leads us to Colle d'Arquata.

"Let no one depart from the Terra d'Arquata and its countryside with the intention of not returning to that land": so says the statute of Arquata del Tronto of 1674. Today this is the motto of the Arquata Potest association that deals with the enhancement of the territory through the maintenance and care of the paths: Arquata del Tronto is, in fact, the only town in Europe that extends between two National Parks, the Sibillini Mountains Park and the Gran Sasso Park and the Monti della Laga.

The Monti della Laga are a unique mountain group in the Apennines and take their name from the Laga Formation, their characteristic lithological structure (that is, of the stone): unlike the rocks that mostly make up the Apennine mountains, those of the Monti della Laga consist of sandstone and are therefore waterproof. In this way, the water remains on the surface, forming rapid creeks, streams and waterfalls - unlike what happens on the limestone mountains, such as the Sibillini, where water seeps into the subsoil causing numerous karst phenomena.

The houses of Colle d'Arquata are built precisely with sandstone. On the stone architraves, it was customary to engrave the radiant sun with the inscription IHS, medieval abbreviation for the name of Jesus Christ.

The Chiarino river, which descends from Macera della Morte (an elevation that begins in the north at the Monti della Laga) until it flows into the Tronto river, has been the natural border for centuries between the Papal States and the Kingdom of the two Sicilies.

During the Middle Ages, the Chiarino Valley was a hermitage place for many monks searching for an isolated place; the most famous one, which spent many years in the hermitage above the Madonna del Chiarino, is Sant'Amico di Avellana. Not far from the Chiarino springs you can still see traces of the few ruins of the hermitage.

In Colle d'Arquata, the charcoal burners’ tradition continues to exist, and the Marella family has been passing on this art from father to son for generations. Vegetable charcoal is made by building a dome of wood pieces, mainly beech, cut ad hoc and arranged meticulously. The dome is covered in turf and foliage and has a central chimney and other lateral vent passages used to regulate the draft.

The carbonization process is long and requires a lot of attention and skills: to transform the wood into charcoal, the wood stack must be heated up to 350-400 °, even for several days, while limiting the supply of oxygen to a minimum, to avoid a generalized combustion. To put out the fire, when the coal is ready (the color of the smoke shows it), the holes are closed; then you wait until the charcoal pit cools off before extracting the charcoal.

Spelonga is a hamlet of Arquata del Tronto and a Turkish flag is kept in its parish church: according to tradition, a hundred Spelongans participated in the Battle of Lepanto in 1571, took possession of the Turkish banner and brought it home, as an heirloom of participation and victory.

So far, no evidence demonstrates the Spelongans' participation in the battle, so the arrival of the flag in Spelonga remains a mystery. However, the memory of the battle has been handed down for centuries and every three years a large party is organized to commemorate the event: the Festa Bella, during which 148 men go into the woods to look for a 25-30 meters high tree which, cleaned from all branches and carried by hand to the village, will become the mast of a galley (the ancient warship, like those used in the famous battle) reconstructed in the square.

On the top of the Rocca overlooking the town, there is the Church of Santa Maria della Rocca from where, in September, starts the torchlight procession dedicated to the Madonna: the faithful arrange themselves in the shape of a cross along the slab of rock near the religious building, with a lighted torch in the hand, and then they descend in serpentine towards the square of Colle. The descent at night creates a suggestive luminous image, visible from the town and the surrounding mountains.

At the church of San Francesco, in the hamlet of Borgo, there is a copy of the Holy Shroud. After the seismic events and the church’s unusability, the relic was moved to the Cathedral of Ascoli.

The fortress of the Rocca, symbol of the Municipality of Arquata, was built in the medieval period with sandstone. Today it is the only building that resisted, albeit with damage, the collapse of the town in the 2016 earthquake.

The Pecorino is a white wine with a strong character. In spring, it is traditional to drink it accompanied with fresh broad beans and the homonymous cheese. The vine, cultivated for many centuries, is native to the area and, although somewhat forgotten in the '70s, was rediscovered in the '80s in the Pescara del Tronto hamlet, in some vineyards that survived the phylloxera (the terrible parasitic insect of the vine). Today its production has spread throughout the southern part of Marche and neighboring Abruzzo.

During the feast of Santa Maria del Chiarino it is possible to taste the crespella with ham, a classic village party food. It is a large pancake (not to be confused with the Abruzzo crespelle, more like crepes) folded in half and stuffed with plenty of ham.

In Colle d'Arquata there are no accommodation facilities. However, it is possible to sleep in a tent at the Church of Santa Maria della Rocca, just above the village (you can get there by following the next stage of the Sentiero Italia).

Starting point reachable by bus from the city of Ascoli Piceno. 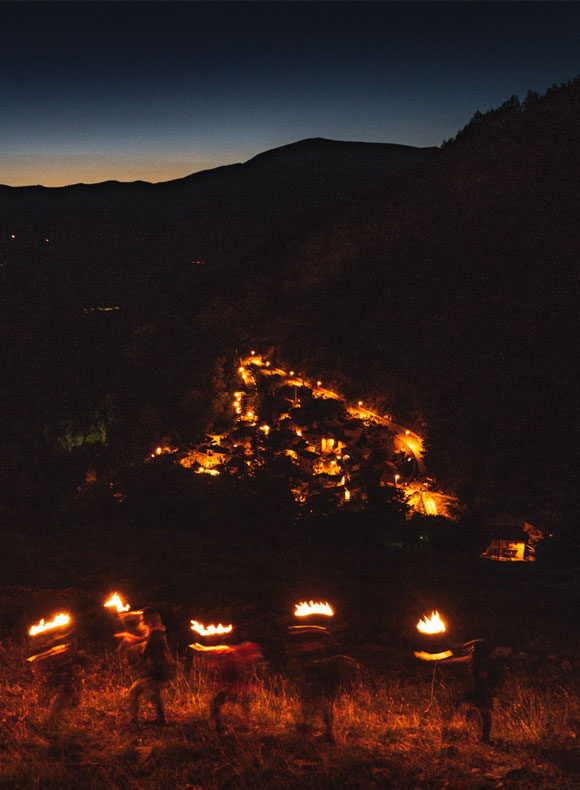 “When it gets dark, we admire the torchlight procession in honor of the Madonna del Chiarino” 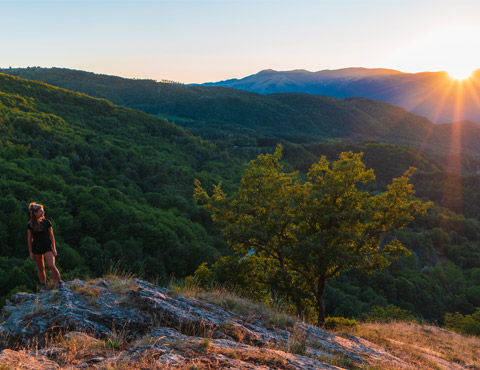