A long and quite demanding stage, marked by a good difference in height (uphill as well as downhill). We enter the wild heart of the little-known Monti della Laga by crossing the Macera della Morte (where a terrible battle between the Carthaginian and Roman armies took place); for the first time we admire the elevations of the Gran Sasso.

The only water source is at the Bivacco del Pastore, along the high ridge of Macera della Morte (before the summit).

The path is sometimes covered by tall grass (often absent signs); it is good to monitor the GPS track.

After the Macera della Morte, you pass a pasture area where you can meet some shepherd dogs: be careful.

Given the little frequentation of the area, it is possible to meet vipers.

From Colle d'Arquata, we immediately start the long climb (approximately 1.000 m height difference) towards the Macera della Morte. After passing with gentle hairpin bends the Church of the Madonna del Chiarino, we enter the woods and continue with a regular slope until we reach a road that we take to the left, on level. Shortly after we find a second one on the right that goes up.

We continue uphill regularly, keeping a close eye on the trail markers, towards the south-eastern shoulder of Monte Comunitore. We then turn south and walk along the wide ridge in the woods, which gradually strips down until it becomes completely grassy. The road becomes a path sometimes covered by vegetation (the area is hardly traveled and the path suffers); we continue for a few meters below the crest, on a path along the hillside.

Once at the Macera della Morte Pass (2,073 m), we begin the descent (ca. 1,200 m drop) to San Martino, initially along the mountain’s eastern ridge: the grass becomes tall and we must keep an eye on the GPS track. After a few kilometers we return to the beech forest and follow a comfortable road in constant descent for a long time. Finally we pass a beautiful rocky ledge (the view of the Laga to the south and the Vettore to the north is splendid); shortly after we spot the fortress of San Martino and the village further down, which we reach easily.

The Macera della Morte (2,073 m) is the border between Marche, Lazio and Abruzzo.

The name seems to be originated by the numerous bones found in these mountains, the legacy of a bloody battle; according to some, the etymology of the nearby Colle Romicito derives from the slaughter of the Romans by Hannibal's army. It is believed that the Carthaginian general crossed these mountains with his elephants before the battle of Cannae.

The area is also sadly famous for other massacres that took place in history: the villages of San Martino, Collefalciano and San Giovanni were burned down during the banditry period, while during the Second World War the hamlets Pozza and Umito, which welcomed English and Slavic partisans, were the scene of a brutal Nazi-fascist massacre (today it is possible to visit the International Partisan Cemetery which commemorates the victims).

The banditry was a phenomenon that affected a large part of the territory between the province of Ascoli Piceno and the one of Teramo in different eras. One of its most representative characters was Giovanni Piccioni, who fought for the Papal State against the annexation to the Kingdom of Italy.

In the municipality of Acquasanta Terme there is a thermal cave, inside which there is a source of sulphurous waters. Thanks to the cave’s relatively high temperature, they are used for both therapeutic and leisure purposes. The thermal waters, already famous at the time of the Romans who used them to treat arthritis and respiratory problems (in what at the time was a resting spot along the Salaria), still attract many patients and tourists.

Another precious resource of the area is the travertine, which is the protagonist of the architecture of the town of Acquasanta, characterizing the wonderful historic center of Ascoli Piceno.

Since 1873 the " Luigi Sabatini" band of Acquasanta Terme has been active and it is under the direction of the Sabatini family since 1906. In that year, Giovanni Sabatini became the director of the band and then passed the direction, in 1946, to Luigi Sabatini (from whom the band takes its name); from 1996 to today, director Mauro Sabatini has been directing it. The band, which has more than thirty members, continues to cheer the whole territory with its music, carrying on an important tradition.

N.B. The philosopher-pantry keeper of the Va 'Sentiero expedition is no less than… Mauro Sabatini's youngest son! L'enfant prodige of the local band academy.

The Monti della Laga are an area rich in rivers and waterfalls (in spring, there are up to 50): in the hamlet of Umito you can admire the beautiful waterfalls of Prata and Volpara.

The Cresta di San Paolo, the watershed between the Tronto river and the Castellano stream, is one of the most interesting itineraries in the Monti della Laga and starts close to the ruins of the Rocca di Montecalvo, once a symbol of the municipality of Montecalvo del Castellano.

On the Tronto valley slope, it is possible to admire Castel di Luco, an elliptical castle that stands on a travertine spur. An author of the 1700s believed that the place where the castle stands was an Italic-Roman place of worship, a sacred wood in the center of which there were the sacrificial altars.

In Santa Maria, the ancient Ad Aquas of the Romans, there are the thermal pools of Lu Vurghe. The name recalls the gurgling of the thermal waters that flowed along the bank of the Tronto river. For some years now the Speleological Association of Acquasanta has done its utmost to make this place a real paradise that, in recent years, thousands of tourists have been able to enjoy.

The Ascoli area’s symbol is certainly the Ascoli olives ( the liva fritta): the tender olive is cut in a spiral, filled with a mix of meat, breaded and fried. The liva is one of the elements of the Ascoli fried mix, a classic holiday dish, consisting of cremini (fried custard), lamb chops and vegetables (zucchini, artichokes and broccoli).

On Christmas Eve, it is a tradition to prepare pasta with lean sauce, prepared with tuna, tomato, tender Ascolan olives (some add mushrooms and truffles): a way to get around the precept not to eat meat on Christmas Eve ... without suffering too much.

The cacciannanze is a typical local focaccia seasoned with oil, salt, garlic and rosemary. The name derives from the fact that it is the first to come out of the oven: caccia, pull out; nanze, front, before.

During the carnival festivities, very popular throughout the province, you can taste the Carnival ravioli, both savory and sweet. The salty ones are stuffed with meat and are eaten fried or boiled (usually incaciati, seasoned only with cheese). Sweet ravioli are fried and filled with cream or chestnuts.

During the Easter period there are the piconi, ravioli stuffed with pecorino and baked in the oven, typically eaten together with salami.

There are no accommodation facilities in San Martino di Acquasanta; it is however possible to camp in the square.

“We walk on an incredible balcony formed by the sandstone rock”Starting point reachable by car.

Starting point reachable by bus from the city of Ascoli Piceno, with a change in Trisungo. 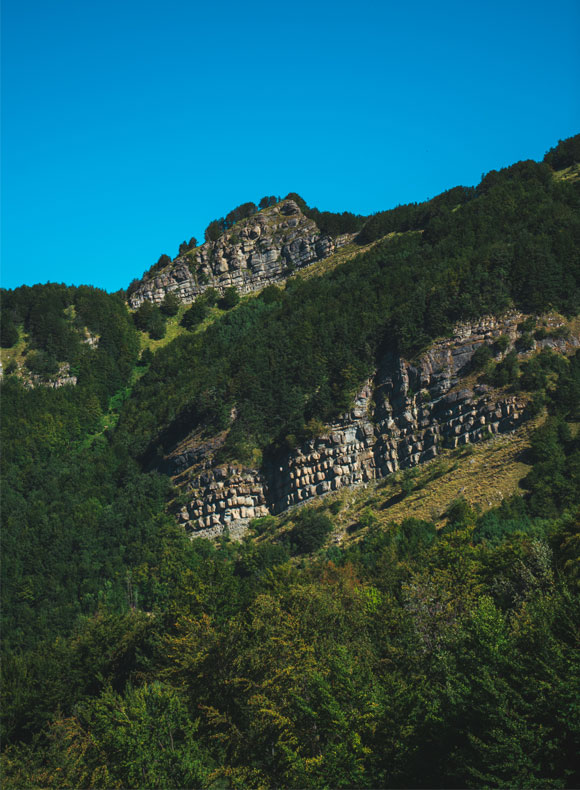 “We walk on an incredible balcony formed by the sandstone rock” 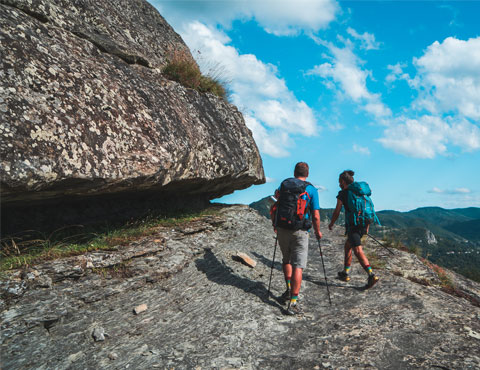