The last stretch through the Picentini Mountains is long and tiring because of the great differences in altitude (both positive and negative), but very satisfying.

We conquer the summit of Monte Polveracchio (1,790 m) and reach Senerchia, one of the villages devastated by the 1980 Irpinia earthquake.

Although there are no particular technical difficulties, the stage is very long and tiring, because of the differences in altitude: it requires good training.

Some sections of the climb are extremely steep and on a dusty surface covered with leaves: watch your step.

In some places the track on the ground is not very clear, or there are several and it is not clear which one to follow: you need to keep your eyes open for the markings (and watch the GPS track).

We leave the centre of Acerno and continue along a slightly downhill asphalt road to cross the Tusciano river on a bridge; immediately afterwards, we take the path to the left and begin the very long climb (about 1,050 m height difference) towards the Polveracchio ridge, which is very steep from the start, but fortunately is entirely in the woods. The first section is often overgrown with vegetation and muddy, as numerous rivulets flow from the ground. Then we reach a saddle crossed by a dirt road, which we cross and continue uphill on a small path. The gradient is very steep at times and the ground is now dusty and covered with leaves, which does not help: the stretch is really tiring and we have to gauge our energy and set a slow and steady pace.

After passing a barbed wire gate (do not forget to close it!), we reach the ridge and with it the landscape opens up to the south. We keep to the line of the watershed and pass Monte Raianetta. and, after a short flat stretch at the edge of the wood, the last part of the climb begins; we reach a forest road and follow it to the right until we reach the summit of Polveracchio (1,790 m): the view is beautiful and includes the Gulf of Salerno, the Amalfi Coast, Vesuvius and even the Vulture... to the south-east we can see the bulwarks of the Alburni.

We continue along the ridge and soon come to a large plateau used as a cow pasture; we continue along a path through the woods (the track on the ground is not always very clear, nor are the signs) and begin the long descent (about 1,100 m drop) to Senerchia. Alternating between stretches of path (often invisible) and cart tracks, we finish the ridge and take the hairpin bends of a dirt road, onto which we then enter and continue our slow but gentle descent. Finally, after a cut in the road, the dirt track becomes asphalted and we arrive above the old watchtower of the mediaeval Castle of Senerchia. From there we take a staircase that leads us around the tower first to the church of San Michele Arcangelo (a legacy of Langobard rule) and then to the old part of the village of Senerchia, destroyed by the earthquake of 1980. Shortly afterwards we reach the centre of the village.

The epicentre of the earthquake, which shook southern Italy from Vulture to Naples, was near Lake Conza, and Senerchia, not far away, was one of the towns most affected by the tragic event. The area has been hit by various seismic events over the centuries, but the figures for the 1980 earthquake are impressive: three regions affected (Campania, Basilicata and Puglia); 687 municipalities affected; 362,000 homes destroyed; 280,000 displaced; 8,848 injured and 2,914 dead.

The quake, which lasted a full 90 seconds, paralysed the entire area and hampered rescue efforts. The then Head of State Pertini, denounced on television the inefficiency of the rescue efforts: five days after the earthquake, some towns had still not been reached. The event deeply shocked Italy and the whole world. After the quake devastated Irpinia, reconstruction unfortunately turned out to be another disaster involving politics, abuse of office and speculation. The huge amount of public money wasted on reconstruction was the subject of a parliamentary enquiry.

Senerchia is located in the Upper Sele Valley, between the provinces of Salerno and Avellino, and is crossed by the Sele River.

According to some late Roman historians, Spartacus, the gladiator leader from Thrace who unleashed the Third Servile War against the Romans, died on the banks of this river. The historical figure became an example of heroism, of the ideals of freedom and equality, so much so that even Marx considered him one of the first examples of proletarian struggle. There is no certain evidence that the Sele is the place where he died, but numerous finds of armour, cuirasses and swords from Roman times have been made in the area.

Some claim that the name Senerchia comes from the name of the Roman oppidum (fortified town) Sena Heraclea, while others claim that it was the Lombards who gave life to the village.

The second hypothesis is supported by the fact that the first nucleus of the settlement is characterised by the church of St. Michael the Archangel, much venerated by the barbarian population, and by the 8th century castle that dominates the entrance to the Upper Sele valley and was built to defend against the Saracens and to protect the town of Conza, which was important to the Lombards from an economic, strategic and religious point of view.

The old village of Senerchia was abandoned after the 1980 earthquake; at the entrance is the public clock which stopped at 7.34 when the quake struck.

Amidst the silence, between alleys and narrow streets, the village is characterised by a small stream that flows through it and by ruins from the Langobard period.

The old church of San Michele Arcangelo, patron saint of Senerchia, is located in the upper part of the village. It is built in Romanesque style and has three naves.

It was built in the 9th century by the Lombards and damaged by the earthquake of 1980. In particular, the wooden statue of the saint (13th century) was damaged when the niche in which it was located collapsed and was unfortunately further defaced by a clumsy restoration.

In the municipality of Senerchia is the Valle della Caccia Oasis: since 1992, the natural park managed by WWF Irpinia has been preserving and promoting biodiversity in this enchanted place.

The oasis follows the course of the Acquabianca stream, characterised by the white limestone of the riverbed, where you will find the old mills, some of which have become restaurants. At the end of the route is the beautiful Acquabianca waterfall, located in the cleft of the mountain.

There are many caves in the area, including the Grotta del Muschio and the Grotta Profunnata. The latter was explored in the early 2000s and served as a refuge for post-unification brigands. The 400 square metre cave has several rooms rich in stalactites and stalagmites, and one room is decorated with a small lake.

Near Valva is the huge Villa d'Ayala Park (18 hectares), surrounded by walls and characterised by the variety of the landscape, where nature and art dialogue: a coppice wood, two Italian gardens, various caves, statues and small architectures.

The park also contains several canals dating back to Roman times and the Teatrino di Verzura, built in the 19th century.

Besides chestnuts, e.g. from Montella or Serino, there are other typical mountain products in the Monti Picentini: mushrooms and truffles. All the main varieties of truffles can be found here and, in particular, the Black Truffle of Bagnoli grows in the municipality of Bagnoli Irpino. A traditional dish in Bagnoli is the “sacco del brigante” (brigand's sack): slices of veal, slices of fresh caciocavallo cheese and truffles. 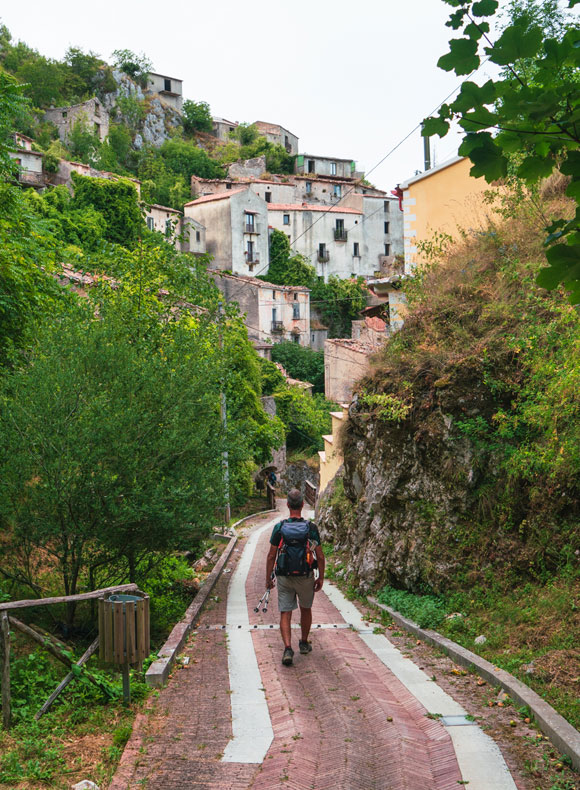 "Senerchia shows all the difficulties of a small, depopulated mountain village, but last night it came back to life to sing, in a night of celebration" 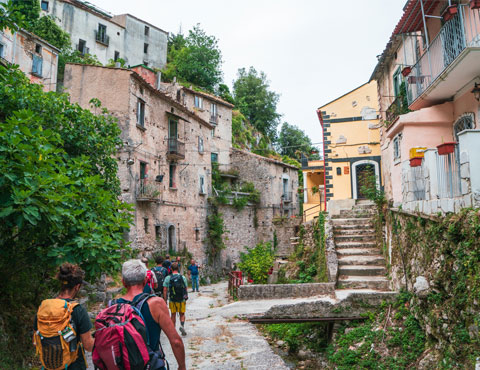