A very long stage but without particular difficulties and mostly downhill.

We permanently enter Molise. The highlights of the day are the presence of deer, the Lago di Castel San Vincenzo and the view of the Mainarde.

The stage represents a variant of the Sentiero Italia (which from Rivisondoli bends south-east, towards Pescolanciano, and then heads south-west towards Isernia), preferred for the scenic beauty of the Mainarde.

The track on the ground (especially in the first part of the stage) is not always clear. The signs are absent and several crossroads are not marked: keep an eye on the GPS track.

At the pass that leads to Lago di Castel San Vincenzo, the path collapses and caution is needed.

In the second part of the route, you walk for a long time on asphalt.

We leave Rifugio Campitelli and retrace the last stretch of the previous stage, returning to the plain of the Val Fiorita, where it is not uncommon to spot deer drinking from the waterhole. The path goes into the woods and we gradually lose altitude (approximately 500 m drop); we cut the hairpin bends of the road and then procede on a comfortable carriage road for several kilometers.

When we reach a crossroads, we take the path on the left which ventures into a narrow gorge, skirting the Rio Colle Alto (at a certain point the path is collapsed); after the gorge, we barely descend (approximately 150 m drop) and we pass on the asphalted road, until we reach the beautiful Lago di Castel San Vincenzo, which we skirt.

We remain on the road heading south, then we take a carriage road on the left to avoid entering Castelnuovo al Volturno; back on the road we reach Scapoli and, after crossing the village, we continue to the bottom of the valley, where we cross the Rio Acquoso. Continuing on the road, we go up the opposite side (approx. 150 m height difference) until we reach a T-junction, where we turn left (shortly after we find a fountain) and calmly descend (approximately 300 m drop) until we cross the Volturno river (which originates in the nearby town of Rocchetta a Volturno) and go up just as far as Colli al Volturno.

Colli al Volturno stands where once was a fortified settlement of the Samnites, then razed to the ground by the Romans.

The construction of the new village took place thanks to the presence of the abbey di San Vincenzo al Volturno. The historic Benedictine abbey was one of the most important monasteries in the South, also thanks to the numerous concessions of Charlemagne. Located in Castel San Vincenzo, it was built in the Lombard period and immediately became a very important center. Especially after the sacking by the Saracens (9th century), the abbey experienced its period of greatest splendor: with its 350 monks it became a small town and it was the reference point for the entire Alta Valle del Volturno.

The events of the monastery of San Vincenzo have reached us thanks to the Chronicon Vulturnense, a chronicle written by the monk Giovanni in the 12th century, which tells the story of the monastery since its foundation in the 7th century. It was written during the Norman expansion, when Frederick II tried to centralize the administration of the kingdom by removing power from the ecclesiastical institutions that managed a large patrimony.

The tragic earthquake of 1349 destroyed the Abbey of San Vincenzo and left room for the political control of the Abbey of Montecassino.

Even if separated by a small valley, the geological distinction is not precise; Mainarde indicates the Molise part of the mountain range. The rocky peaks rich in overhangs (it is spectacular the one created by the Rio Colle Alto) are the highest in Molise: Monte Mare (2,124 m) and Monte Metuccia (2,105 m) exceed Monte Miletto (.2050 m), the highest in the Matese massif.

The Mainarde area is characterized by a mild climate (the presence of olive groves is conspicuous) and the Volturno river which separates the mountain chain from the Matese massif.

The nearby village of Scapoli is renowned for its zampogna (bagpipe) craft tradition.

Even today there are many shops and master craftsmen who produce zampogne and ciaramelle (shawm), sold throughout Italy and known abroad. Legacy of an ancient world, the zampogna was the instrument par excellence of the Apennine shepherds and its voice marked the events during the year. During the Christmas period the bagpipers went from town to town, to cheer the inhabitants on holidays.

Since the summer of 1975, the Mostra Mercato della Zampogna has taken place in Scapoli, an event that laid the foundations for the survival of the millennial tradition. Today there are two museums in which this ancient instrument is the protagonist: the Mostra permanente della Zampogna and the Museo internazionale della zampogna "P. Vecchione".

Volturno is the largest river in Southern Italy, with its 175 km in length and an area of the supply basin of 6,342 sq km.

The river, which pours into the Tyrrhenian Sea, flows from the Mainarde, in the territory of the Municipality of Rocchetta a Volturno - where it is possible to visit the crystalline spring basin.

Of the monastic complex of the abbey of San Vincenzo al Volturno you can admire, in addition to the new abbey built in the 12th century, the remains of the old monastery.

In particular, the Crypt of Epiphanius, built between 824 and 842, represents one of the most significant examples of Lombard art. Inside the crypt you can see the stupendous cycle of frescoes of  Lombard Beneventan inspiration that show the dogmas of ancient Christianity.

At the base of the Mainarde is the artificial lake of Castel San Vincenzo, where it is possible to practice fishing (with numerous presence of salmonids) and various water sports; moreover, on its banks, where a cycle path passes by, there is a camping and a horse riding school.

The pass created by the Rio Colle Alto, just above the town of Pizzone, cuts perpendicularly the mountain creating a triangular section in the shape of a toblerone. On the north wall of the pass, at 930 meters above sea level, there is the hermitage of San Michele a Foce, a small building set in the mountain dedicated to the Archangel Michael.

On Monte Marrone, it is possible to see the hut of Charles Moulin, a French painter who, after winning the Prix de Rome for painting in 1896, fell in love with the Mainarde. He arrived here after hearing the stories of two bagpipers who emigrated to Paris; in 1919, he moved there permanently (except for some periods spent in France and in the United States) until his death in 1960.

The painter, in search of a style that could best describe the natural character of the light,used the pastel to paint the landscapes and faces of the area. He lived the life of a hermit, in a small shelter made of dry stone walls and with a grassy roof. For the local inhabitants, that man with a thick white beard (skilled connoisseur of roots and wild herbs, from which he obtained excellent decoctions) was an almost mythological character and they nicknamed him the Mainarde Bear.

The raviolo scapolese is recognized as one of the traditional Molise dishes.

It is a raviolone filled with all kinds of good things: minced pork, bacon, goat ricotta, pecorino, potatoes and beets. Not satisfied, local cooks traditionally season it with a goat leg and tomato sauce.

Every year, on Carnival Sunday, the ravioli festival takes place in Scapoli.

In Colli al Volturno there are several accommodation facilities.

The nearest town reachable by bus is Alfedena, starting from the city of Avezzano. 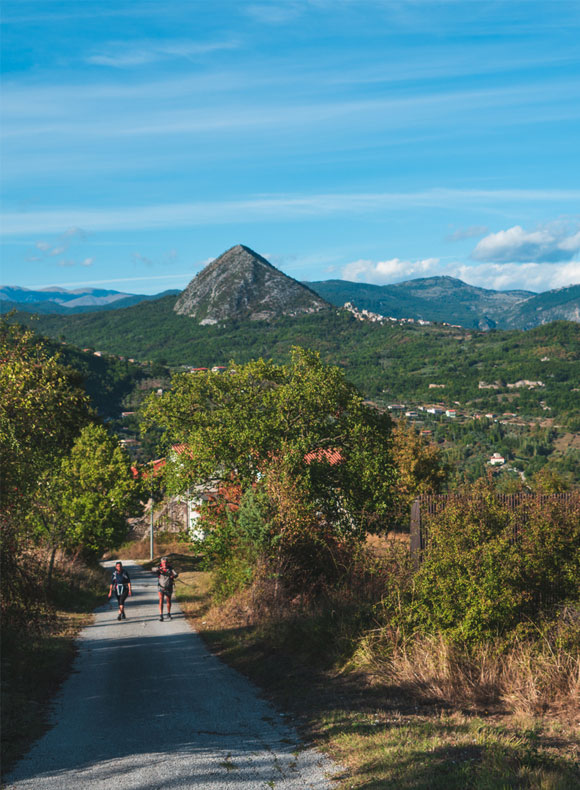 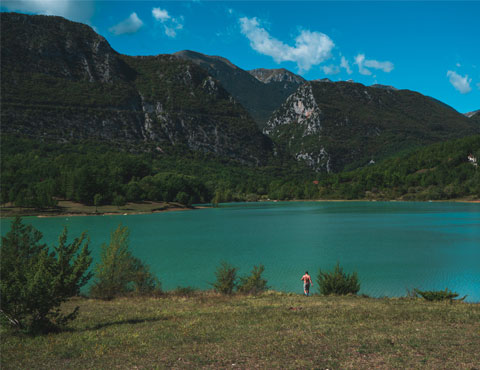