A short and easy stage with little difference in altitude, mostly on asphalt and dirt roads, with no particularly interesting landscape, except for the short section through the Riserva Naturale di Montepugliano, interesting for its sinkholes.

Although the stage is not difficult, it can still be troublesome because of the asphalt that characterises almost the entire route.

Watch out for the cars speeding out of Faicchio and along the provincial road just after the bridge over the Titerno (the dried-up river).

The stage begins in Faicchio, just below the ducal castle of Norman origin, located in the town centre. The first part of the route is on asphalt until we take a dirt road that leads to the bridge that crosses the Titerno river, which has dried up.

We continue on asphalt for several kilometres until we come to another dirt road which begins to climb gently on a slight slope (about 200 m height difference). At the end of the climb, we return to a little-used asphalt road lined with olive groves and vineyards. We then turn onto a provincial road, where we have to be very careful of speeding cars. After a few hundred metres, we pass a gate and take a dirt road again; from there the route continues through a few kilometres through a wood, inside the Montepugliano Natural Reserve, characterised by the presence of sinkholes.

After leaving the reserve, the path descends gently (about 200 m drop) and we reach the town of Telese Terme, where we take a dip in the famous thermal baths and...taste the sulphurous water!

Telese Terme takes its name from the Samnite city of Tulisium, which became Telesia in Roman times. The ancient city, of which archaeological remains can be seen, was located between Telese Terme and San Salvatore Telesino.

Located in a fertile plain between the Calore and Volturno rivers, Telesia was a large and rich Roman colony whose strategic position favoured commercial development, as evidenced by the discovery of a local coin.

The Carthaginian general Hannibal occupied the town for two years until he was defeated by the Roman dictator Quintus Fabius Maximus in 214 BC. During the Lombard period, the town fell into disrepair until it was destroyed by the earthquake of 1349, which shook the entire Telesina valley.

The name Telesia echoes in the history books for two important Samnite leaders of the Ponzi family.

The first is Caio Ponzio Telesino, who in 321 BC trapped the Roman army in the famous Battle of the Forche Caudine and caused the Romans the humiliation of submitting to the yoke. Caius Pontius Telesinus was defeated in the Third Samnite War (Battle of Sentinum) and brutally murdered in Rome in the Mamertine Prison.

The other famous leader, probably a grandson of the first, is Ponzio Telesino. As commander of the Samnite army during the Social War between the Italic peoples and Rome, he marched to the gates of Rome during the civil war in 82 BC; he fell in battle just before reaching the walls of the Eternal City, saved by the arrival of General Lucius Cornelius Sulla.

The hatred between the Romans and the Samnites lasted for more than three centuries: the Romans never forgave the proud Samnite people for the humiliation they had suffered and managed to almost completely destroy the memory of a great civilisation.

Telese Terme is famous for its thermal waters, which emerged after an earthquake in 1349. At that time, the sulphurous vapours made life unhealthy for the inhabitants. However, in the nineteenth century, people began to exploit this resource: Telese's thermal waters are excellent for drinking and were marketed as far as America. Among the many establishments that have sprung up since the 19th-century, the most striking is the Antiche Terme Jacobelli, also known as the bagni vecchi, an old thermal establishment that is now a natural park.

It was built in 1867 by Cavaliere Achille Jacobelli and the remains of the original structures still exist today: despite their abandonment, they are particularly impressive.

Just outside the town centre is a round lake of karstic origin about one kilometre in diameter. It was formed as a result of the disastrous earthquake of 1349 and is characterised by a great depth from the first metres of the shore. It used to be a popular tourist destination, but bathing has been prohibited for some years now.

In Telese Terme there is a Norman tower (10th-century) that was part of the SS Croce (you can see the ruins), which was destroyed by the earthquake of 1349. The 17 metre high monument is a great example of Norman architecture in Campania.

Typical of the region are the Taralli di San Lorenzello, small Taralli seasoned with fennel. They are eaten as a side dish with the thermal water. Some also offer Panzanella (vegetable salad) and Taralli dipped in sulphurous water.

In Telese Terme there are several accommodation facilities.

Starting point reachable by bus, starting in Naples and changing at Piedimonte Matese. 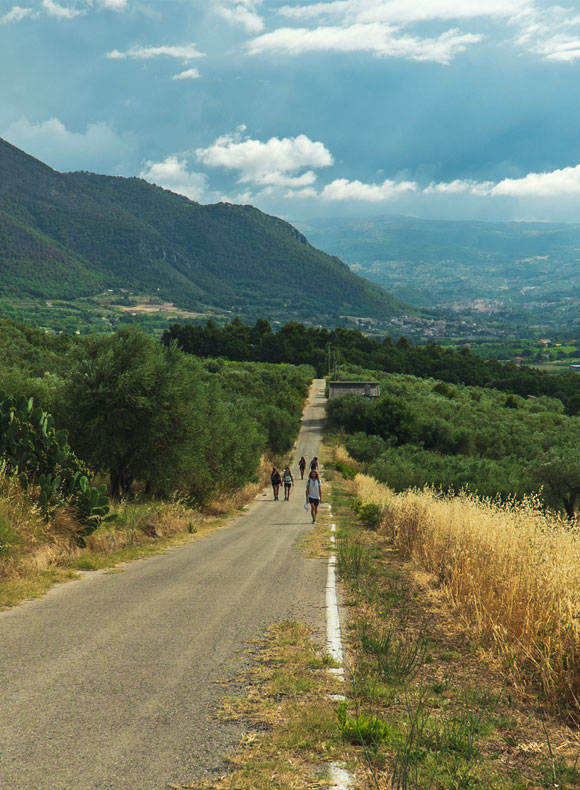 "We walk for hours on the hot asphalt; benevolent, the clouds give us some respite from the sun" 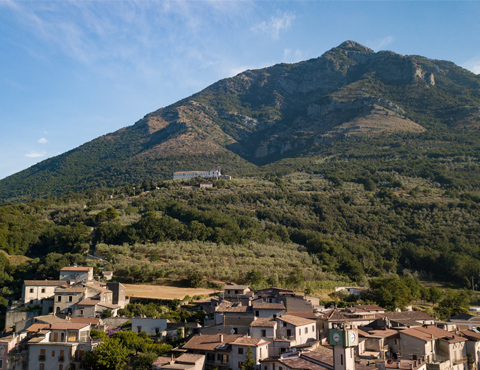