A stage of scenic (Lago Telese, Pizzo del Piano, Monte Sant'Angelo) and cultural interest, thanks to the beautiful village of Solopaca.

It should not be underestimated due to its length, the considerable height difference and the often missing or not very clear signposting.

On the asphalt road that leads from the centre of Telese Terme to the village of Solopaca, you have to watch out for the traffic: Cars drive fast and once you leave the lake behind, there is no pavement.

Along the path that leads to Pizzo del Piano, the signs are sometimes absent or very inconspicuous, although there are several tracks; once you reach the top, the paths and signs disappear and you have to pay attention to the GPS track.

The last few kilometres are steep downhill in places. Due to the uneven stones, you should be careful (sticks are recommended so as not to strain the knees).

We leave the centre of Telese Terme and continue for a couple of kilometres on the road through the town until we reach Lago di Telese. From there, we continue on the asphalted road that leads us to the charming village of Solopaca, through which we continue on a dirt road and then begin the climb, which is quite steep and long (about 700 m height difference) but almost entirely through the woods. We enter the Parco Naturale Regionale Taburno-Camposauro.

The summit of Pizzo del Piano (940 m) offers us a wonderful 360° view. On the summit of Pizzo del Piano, we have to pay attention to our orientation because there are no tracks or signs. After crossing the plateau on the summit, we continue to climb (about 200 m height difference) and then continue on a slight slope until we reach a charming clearing with a small picnic area. We continue uphill (about 100 height difference) until we reach the summit of Monte Sant'Angelo (1,189 m), from where we can admire the green valley below.

After descending from the mountain, the path continues through a huge beech forest. The trees are very tall and give this part of the stage a magical atmosphere. We then go around Monte Rosa (1,308 m, the highest peak in the park) and come out of the beech forest; we then walk along a path on the hillside and lose altitude (about 300 m drop) until we reach Piano di Prata, a large picnic area where we can spend the night with our tent and celebrate the stage with a nice barbecue.

Piano di Prata lies in the middle of the so-called “Dormiente del Sannio”, a mountain ridge resembling an outstretched woman.

The protagonist of this evocative image is the limestone massif of Taburno-Camposauro, which is part of the Apennine chain but detached from it. Since 1993, this area has been protected by the Taburno-Camposauro Regional Park.

Some claim that Piano di Prata is the actual place where the Battle of Forche Caudine took place, in which the Romans were defeated and humiliated by the Samnites led by Caius Pontius Telesinus.

According to this hypothesis, the Caudina Valley would have been too large to stop the Roman army, while the long and narrow shape of the Piano di Prata and the presence of peaks on the sides would have made it perfect for trapping the Romans.

At Piano di Prata are the ruins of the old mill of Prata, once part of a system of structures used for cutting marble.

Discovered thanks to a plan dating back to 1853, the ruins were brought to light in 2015 and renovated with materials found on site. The mill, which dates back to the Middle Ages, is a building that tells the ancient story of the area.

Above Tocco Caudio, you can visit the charming ghost town of Tocco Vecchio, already in a state of decay and finally abandoned after the 1980 earthquake.

A typical sausage from the Taburno area is the Castelpoto sausage (now a Slow Food Praesidia), a sausage characterised by its intense red colour.

It is made from the noble parts of the pig (ham, shoulder, capocollo), coarsely minced and enriched with the powder of papauli (local name for sweet or hot peppers). The papauli are first hung in long chains to dry in the sun, then roasted and ground. Fennel and pepper are also added and the whole thing is then enriched with garlic water. Besides the taste, the antiseptic properties of the macerated garlic ensure that the salubrity of the sausage is controlled.

It is usually sold in the form of double capuziello (small sausages about 10 cm long tied together), but there is also a larger version called capoziro, which is traditionally soaked in oil or pork fat.

Among the many Aglianico varieties in southern Italy is Aglianico del Taburno DOCG. Aglianico is a grape variety introduced from Greece between the 7th and 6th centuries BC.

Traditional in the Taburno region is the ritual of the buried potato.

In the past, it was customary to store mountain potatoes in large ditches dug into the ground and covered with ferns and straw. It is believed that burying the potatoes was a method used by the farmers to escape the thefts of the many brigands. Today, thanks to Slow Food Taburno, this technique is being revived because it has many advantages: the potatoes continue to ripen even in the harsh winters and retain their freshness and organoleptic qualities.

Pic-nic area in Piana di Prata; there are no facilities and you must bring your own tent.

Starting point reachable by bus, starting from the city of Naples.

Starting point reachable by train, starting from the city of Naples and changing at Caserta. 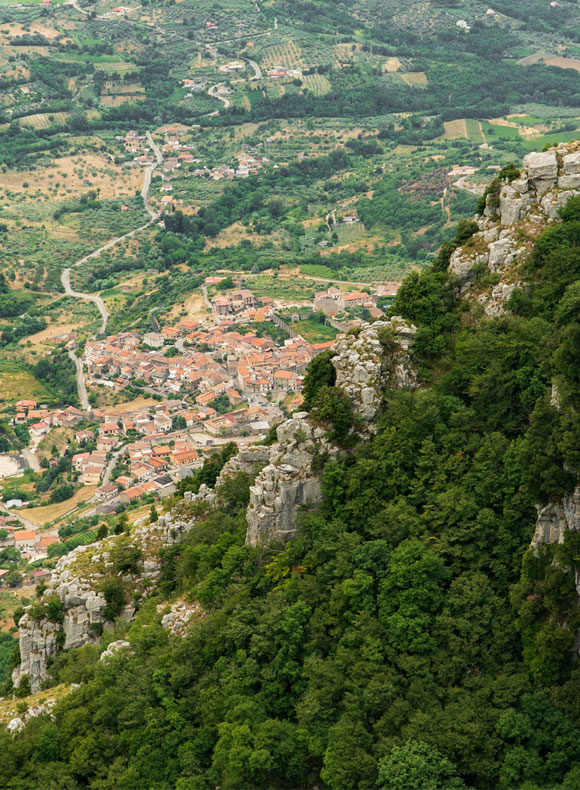 "Under the trees, time passes more slowly, as if swallowed up by the shadows" 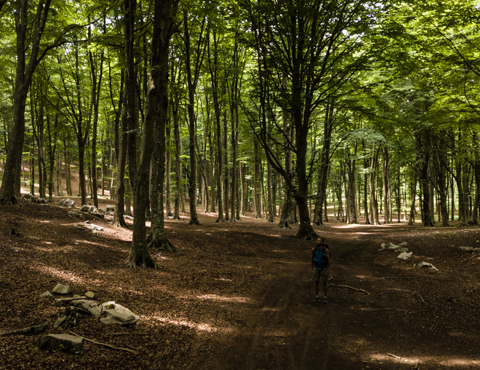