This is a medium-length stage that is quite easy on paper, but is hampered by poor maintenance and almost no signposting in the first part; the route runs almost entirely in the shade of the woods, apart from the sections with tarmac road.

The only plus point is the view from the Forcella della Cava, which, on a clear day, offers a unique panorama of Pompei, Vesuvius, Salerno and the Lattari Mountains.

At the beginning of the path, after you have left Oscato, the path is almost non-existent and completely covered by vegetation. However, you can make your way by carefully following the GPS track.

There are no CAI signs until you reach Croce.

There are no water points until Croce (more than halfway  along the route): bring a good supply with you.

There is a risk of ticks, especially until Varco Diecimare.

We start at Mercato San Severino and walk the first kilometres on asphalt, slightly uphill (about 100 m height difference); then, after passing the hamlet of Oscato, we take the path and start the real climb (about 600 m height difference). The vegetation becomes denser and denser and the higher we climb, the more difficult it becomes to find the path, so it is essential to keep an eye on the GPS track so as not to get lost. Once we reach Varco Ceraso (720 m), we take the path towards Forcella della Cava and overcome the last difference in height on a path covered with ferns. On a clear day, the view from up here is incomparable: we can finally see the sea again... in front of us are the Monti Lattari, Vesuvius and Pompei on the right and the Golfo di Salerno on the left.

We start the descent (about 200 m drop) along the ridge to Varco Diecimare. Leaving the ferns behind, we find ourselves in chestnut plantations; we continue eastwards and at the first junction take the well-marked and very clean path to the right; we continue along a gentle slope until we reach the western slope of Poggio Arenella, then we take the path to the left until we reach a wider path and then turn left.

We continue to follow the signs, immersed in the shade of chestnut and hazelnut trees. We go downhill (about 100 m drop) until we come to another asphalted road and a fountain. We take the path that goes downhill (about 200 m drop) towards Molina, passing under the railway line.

Then we reach the La Valle dei Mulini Archery School. As we leave this area, we notice some steps on the right, so we go under the road SR 18 to the village of Molina, which we climb along the Bonea stream; we cross the second bridge and continue walking along the asphalt road. It is necessary to be very careful because the path on the left is not easily visible. From here begins the final climb (about 200 m height difference), first on a path and then on asphalt, which leads us to the village of Dragonea.

Its inhabitants, like the Dragonesi, are called Truccanari. This name goes back to a 19th-century event: some of them went to the Badia di Corpo di Cava equipped with candles hiding inside a wooden soul. The historical rivalry with the “cavesi” was sealed with a physical confrontation and since then the inhabitants of Dragonea have been called Truccanari, an expression that combines the Neapolitan term troccano (meaning stick) and the word “trick”, referring to the stratagem adopted.

The Monti Lattari range cuts the Sorrentine-Amalfitan peninsula in half.

Not only do they form a barrier between the two “faces” of the peninsula, one from Salerno and the other from Naples, but they also fundamentally differentiate the landscape: the Amalfi Coast is characterised by steep cliffs that drop precipitously into the sea, while the Sorrento side declines more gently. The geological formation is also reflected on the seabed.

The Lattari chain is part of the Apennines and can be described as a continuation of the Picentini massif. The highest peaks of the chain are Monte Sant'Angelo a Tre Pizzi (1,444 m), Monte Faito (1,131 m), Monte Finestra (1,138 m) and Monte dell'Avvocata (1,1014 m) - a beautiful combination of sea and mountains.

In 2003, the Monti Lattari Regional Park, based in Corbara, was founded, covering an area of 166,000 hectares.

Near Corpo di Cava, a hamlet of Cava dei Tirreni, is the Abbazia della Santissima Trinità.

Founded in 1011 by Alferio Pappacarbone, it was the centre of the Ordo Cavensis, a powerful monastic congregation that extended its dominion throughout southern Italy with 77 abbeys, 100 priories, 20 monasteries, 10 obediences and no fewer than 273 churches. After Alferio fell seriously ill in the Alps during a diplomatic mission in France, he decided to retire to a cave at the foot of Monte Finestra. When he recovered, he fulfilled his vow to dedicate his life to God and wore the habit of San Benedetto da Norcia.

As ambassador of the Principality of Salerno, he became a hermit and soon attracted followers with whom he founded a small monastery in 1011. He was the first abbot of what became one of the most important abbeys in southern Italy. The small monastery grew into a large abbey and was enriched over the centuries with buildings, sculptures, paintings, codices and precious objects.

In particular, inside the abbey there is still the abbey archive dating back to 1205; it contains thousands of codices, manuscripts and parchments: documents dating back many centuries from all over southern Italy are published in the Codex Diplomaticus Cavensis. The complex, which houses wonderful architectural treasures from several centuries, is enriched by the Basilica, rebuilt in the 18th century over the original nucleus from the founding period; it is decorated with magnificent polychrome marble and also forms the entrance to the monastery, which extends behind the village of Corpo di Cava, protected by walls and bastions.

Vietri is famous for its ceramics: in the Museo della Ceramica Vietrese you can admire the wonderful artefacts.

Located in the Villa Guariglia complex (enriched by a splendid park overlooking the Gulf of Salerno), the museum presents a chronological tour (with works dating back to the 17th century) and another thematic tour: from devotional ceramics to everyday use.

One section is dedicated to the German period: in the 1920s and 1930s, artists from all over Europe, especially Germany, came here to learn and apply the techniques of traditional Vietri ceramics. Recently, another section has been added, dedicated to riggiole, or decorated tiles.

An unmissable product of the Amalfi Coast is Colatura di alici di Cetara, an amber-coloured liquid sauce used as flavouring.

It is made by macerating the anchovies for eighteen to twenty-four months. The anchovies, which come exclusively from the sea of the coast, are gutted and headed as soon as they are fished and then placed in alternate layers with the salt in the "terzigno" (one third of a barrel). Everything is closed with a wooden lid ("topagno") and pressed with a large sea stone. After six months, the precious liquid is ready: it is poured through a small hole at the bottom of the "terzigno", passing again between the salt and the anchovies, making it even richer. It takes fifteen to forty days to empty the entire container, as it flows down drop by drop.

Many associate the Colatura of Cetara with the famous Roman garum (a sauce made by soaking various types of fish), but the origin of the Colatura is actually linked to the monks who dried the anchovies donated by local fishermen in large barrels: one day, one of these barrels remained full longer than usual and this is how this extraordinary product was born, now protected by the Slow Food Presidia.

A typical side dish is linguine or spaghetti dressed only with Colatura - the pasta is cooked without salt because the Colatura is particularly tasty. 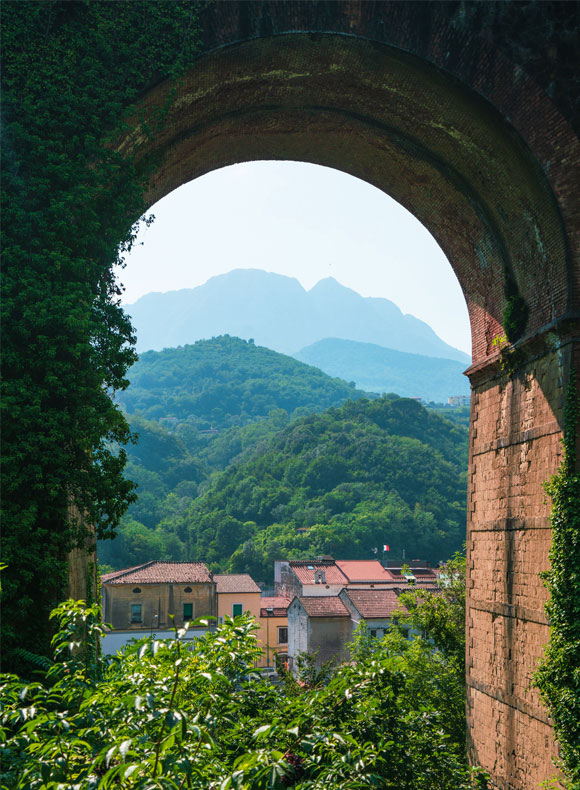 "The day is tough, the vegetation covers the path and the heat gives no respite. We seek rest in the shade of the arcades" 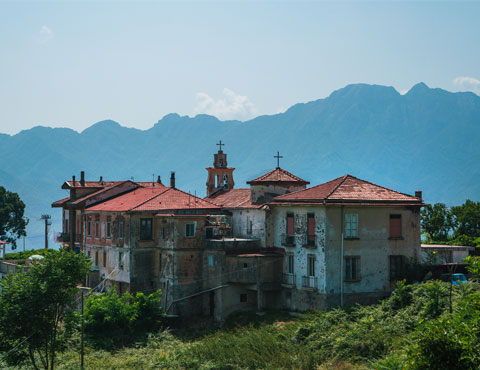