Quite a long stage with a considerable difference in altitude, the first of the circumnavigation of Etna.

The volcano looms over our heads the whole time, but the landscapes change constantly: first vineyards, then green forests, then lava flows again - without interruption...

Stage with no particular difficulties, but long and strenuous: not to be underestimated, especially on hot days.

Signposts are not always present; it is good to follow the GPX track.

We leave Mojo Alcantara on secondary roads, cross the river Alcantara and reach the village of Verzella. We begin our long climb (about 1,300 m height difference), which is very gentle, on a road; alternating with some short stretches on a gravel road, we climb until we cross the Etna and Madonie provincial road; then the road becomes a gravel road and we continue to climb effortlessly, passing old houses made of lava stone and modern vineyards blessed by the nitrogen that the volcano releases into the soil. When we reach the provincial road, we turn left and after a few hundred metres take the dirt road to the right.

The gradient changes and although we stay on an excellent asphalted surface, we start to struggle, also because of the lack of shade; behind us the sharp shape of Rocca Novara reappears. Then the first trees appear and near Monte Pomiciaro (1,372 m) we enter a pine forest. The gravel road becomes gentler, with wide hairpin bends, and we reach the Rifugio Grotta di Palombe, an excellent place to have lunch (the fountain offers excellent water to refresh the face, but not to drink).

Shortly afterwards we reach the Pista Altomontana (Altmountain Track), which takes us to the first flashes of the moon thanks to the lava flows we cross, alternating with green beech woods. When we reach a crossroads where we have to turn left, we can take a short detour to visit the Grotta dei Lamponi, which is very worthwhile. We turn back and approach Monte Nero; we walk along a good path and cross the northern shoulder of the mountain; the view becomes more and more amazing, among expanses of black sand and iridescent tufts of grass. Finally, we descend (150 m drop) to Piano Provenzana along a small, intuitive path that cuts through some lava flows.

The Parco dell'Etna (Etna Park) was established in 1987 and covers about 60,000 hectares. Debates about the preservation of this unique place in the world began in the 1960s, when rampant tourism led to the proliferation of numerous modes of transport around the volcano.

Etna’s forest heritage in particular is unique in the whole of Italy and Europe, with many plant species that only grow in this environment, such as the Etna chamomile (Anthemis Aetnensis), the Etna curd, the Etna birch and many others.

Lush agriculture has developed in the foothills of the region: Grapes on the north-eastern slopes, pistachios (Bronte and Adrano), strawberries (Maletto), peaches (Mojo).

A native of Linguaglossa was the poet Santino Calì (1918-1972), a man of culture who was involved in both politics and teaching and who adopted democratic teaching methods open to innovation.

Passionate about the Sicilian language, he collected legends about Etna from the peasants and shepherds who lived around the volcano.

There are more than 200 caves throughout the volcanic cone, created by the underground lava flow. When the lava flow subsides, cooling due to contact with the air creates tunnels (flow tunnels) in which the glowing lava continues to flow.

Many of the existing caves have been known to man since ancient times and were used as places of worship or burial in the past. One of these is the Grotta di Serracozzo, which consists of a large chamber illuminated by a beam of light from the ceiling. Among the most famous and peculiar is the Grotta del Gelo at 2,030 metres above sea level, created during the eruption of 1614 and so called because inside it there is a perpetual glacier - the southernmost in Europe!

Among the many Sicilian products, one of the most famous specialities is pasta alle mandorle, an alamonsd sweet common throughout the south, which in Sicily takes the traditional form of “frutta martorana”: fake fruits are made from a mixture of almonds and sugar, a masterpiece of the confectioner’s art.

The Sicilian tradition is closely linked to the monasteries and these finely crafted creations can be traced back to the Palermo monastery of the Martorana in the first centuries of the year 1000.

Among the grape varieties that grow on the slopes of Mount Etna, Nerello Mascalese is the undisputed protagonist. Its black grapes produce a wine with an intense flavour that absorbs all the richness of the minerals of the volcanic soil.

The grape variety, called niureddu mascalisi by the winemakers of Etna, was introduced by the Greeks who came to Sicily in the 8th century BC and has continued to be cultivated ever since during the Roman Empire and under the rule of the Arabs, Normans and Bourbons. Since 1968, it has been used together with 20% Nerello Cappuccio as the main wine for the production of Etna Rosso DOC. It is purely vinified and fully expresses all its qualities: floral notes flank a spicy taste.

The starting point can be reached by bus

The starting point can NOT be reached by train. 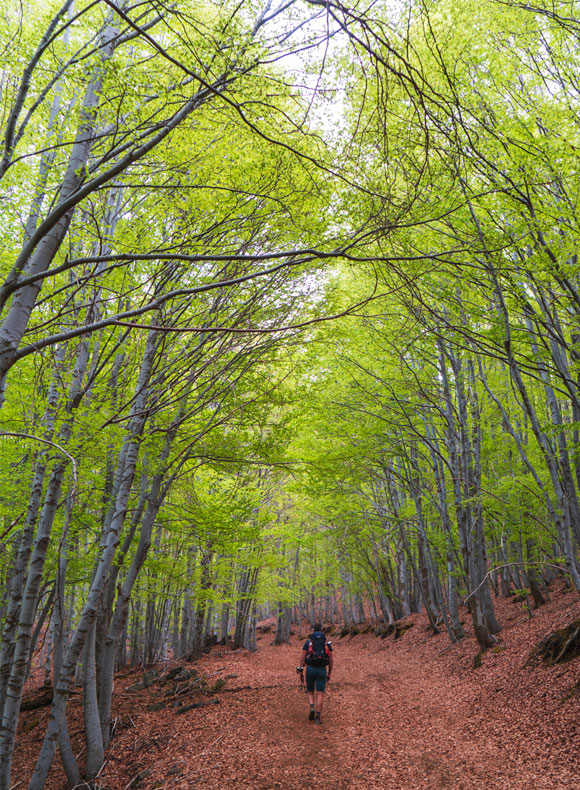 “Etna welcomes us from the start with a burst of ambience, colours and awesomeness” 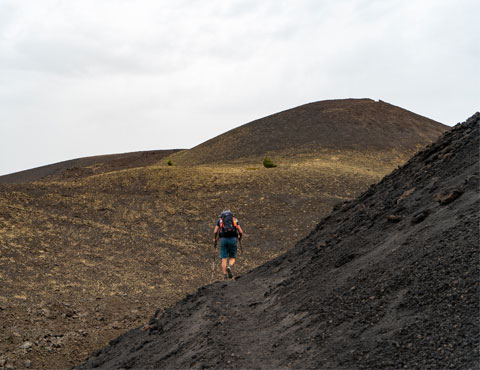