No water points: you need to bring a good supply, especially on summer days.

The first few kilometres are downhill (about 150 m drop), on asphalt. Then we enter a beech wood where we climb up a slight slope (about 150 m height difference), to leave the wood after a few kilometres and then continue on a dirt road and a meadow. We continue amidst the yellow posts indicating the presence of a methane pipeline, up to Monte Cozzolino, which at 1,182 m offers a beautiful view of the surrounding mountains, the Cosenza valley and the city itself. After the summit, the route descends via a slight slope and then descends a few dozen metres faster. In this section we can enjoy the highlight of the day: in the distance we can admire the Aeolian Islands, about 100 km away as the crow flies.

Only a few kilometres from the finish of the stage (in a south-westerly direction), Monte Cocuzzo is the highest peak of the Catena Costiera at 1,541 metres.

Its name is derived from ancient Greek and means “bad stone” (kakos kytos). Some claim that the reason for the name is the volcanic origin of the mountain, as it has a conical shape. In reality, recent morphological studies show that the mountain was formed from dolomite.

Mount Cocuzzo is located in the area between Longobardi and Mendicino, an Oenotrian town once called Moenekine in ancient Greek.

The tradition of the municipality of Mendicino is the Juovi Santu, the representation of the Passion of Christ. The origin of this tradition is uncertain and can be traced back to the end of the 19th century; at first it was a simple procession, it later became a real popular theatrical performance in which the citizens interpret all the stages of the last days of Christ.

The village of Mendicino is home to the Museo dinamico della Seta, which revives the ancient tradition of coarse silk processing.

In the 19th century, Mendicino was one of the most important centres for silk processing: the rural landscape was dominated by mulberry trees, while the village was teeming with spinning mills - there were up to forty! In the spinning mills of Domenico Gaudio and Eugenio Gaudio, the last two still standing at the beginning of the 20th century (a precious example of industrial archaeology), the Museum is now set up, renovated and enriched in 2015 by a multimedia room through which you can immerse yourself in the daily life of the village thanks to documents and testimonies.

Between the towns of Carolei and Mendicino, above the river Acheronte, lie the caves of Alimena.

This is where the treasure of Alaric, king of the Goths, is said to have been hidden. According to legend, after the conquest of Rome in 410 AD, Alaric set off south to reach Africa, but a sudden storm wrecked his ships on the Calabrian coast. The king decided to wait for good weather before setting out again. During this pause, however, he fell ill and died after asking to be buried in the river Busento. His warriors buried him together with his horse, his armour and his treasure in a place that was to remain secret (the river was even diverted, thanks to the work of thousands of slaves who were slaughtered at the end of their labour).

After being forgotten for centuries, the legendary tomb of Alaric was rediscovered in the first half of the 18th century as part of a search operation between the Busento and Crati rivers, but with no results. In the 19th century, the work The Tomb of Busento was written by August von Platen and translated into Italian by Giosué Carducci. The hypothesis that the Grotta di Alimena is the burial place of Alaric and his treasure goes back to Natale and Francesco Bosco, who found an alleged engraved cross in the valley where the two rivers (Acheronte and Busento) meet, and an altar carved into the rock and river sand (an unusual presence in a limestone cave) inside the grotto. However, the Bosco brothers failed to obtain permission for the excavations and the caves remained inaccessible, leading to the discovery of clandestine excavations in 2010.

Institutions consider the hypothesis of Alaric's tomb in the Alimena caves to be unreliable: The evidence supported by the Bosco brothers has been refuted and, above all, no artefacts have been found that can be traced back to the Gothic king.

An important aristocratic palace in Mendicino is Palazzo Campagna, built at the end of the 18th century by the nobleman Carlo Del Gaudio and later passed to the Campagna family after a marriage between the two families.

This palace was the home of the poet Giuseppe Campagna and housed many intellectuals in the early 19th century.

Another Christmas sweet is Bocconotti: a short pastry sweet filled with sultanas, chocolate and jam.

Traditional sweets on Palm Sunday are sweet tarallucci, glazed with egg white, sugar and lemon and called Ginetti - they are traditionally hung on the blessed palm tree.

At the end of the stage there is no accommodation, you have to sleep in a tent.

The nearest location that can be reached by bus is San Fili, starting from the city of Cosenza.

Here is the  LINK to check the timetables. 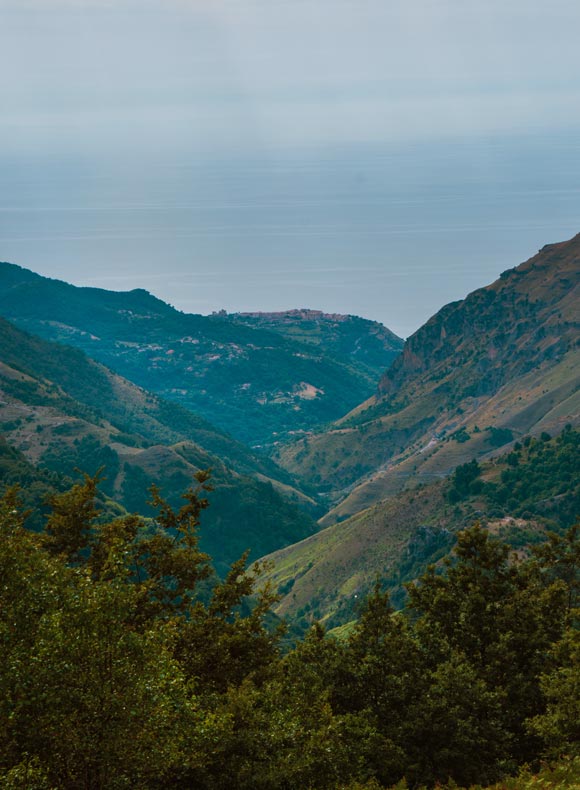 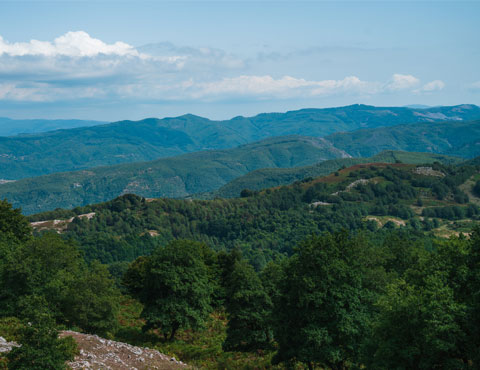