A stage of medium length, without difficulties, which in places overlaps with the Cammino di San Francesco da Paola. Like the previous one, it starts on asphalt and then becomes a dirt road. It is always accompanied by the forest with some very beautiful panoramic views.

Along the ridge of Monte Cervello, the Sentiero Italia coincides with the Cammino di San Francesco di Paola, which is always well signposted.

From the Cinquemiglia Forestry Barracks, in the middle of the beech wood, we descend to take the asphalt road that passes just below the refuge and turn left. We walk the first kilometres until we reach a saddle where we intercept the start of the trail on the right. Here we find Laghicello (where there is the Triturus Alpestris Inexpectatus, discovered in 1982), a very beautiful place that is also the only watering hole of the stage.

Then the route begins to climb gently (about 250 m height difference) through the forest along the ridge. We follow the so-called “via panoramica del Cammino di San Francesco di Paola” and find a metal sculpture on the ridge with the silhouettes of St. Francis and two pilgrims. The forest opens up and we can admire the Sila and all the towns around Cosenza on one side, the Tyrrhenian Sea and Paola on the other. Then we pass the parabolas on the summit of Monte Cervello (1,389 m) and descend, first continuing along the ridge and finally into the last stretch of woodland to the Crocetta Pass.

One of the most famous miracles of San Francesco da Paola is that of the cloak.

During his lifetime, the fame of the Saint from Calabria grew by leaps and bounds and there were many disciples who wanted to follow his lifestyle. The “Ordine dei Minimi” he founded soon spread to Sicily and especially to Milazzo, where in 1464 two magistrates asked Francis to build a monastery.

While travelling from Calabria to Milazzo, on foot and with no money, Francis asked a boatman to ferry him and two companions to Sicily as alms. When the boatman refused, the future Saint spread his cloak over the waves of the sea and crossed the strait with his two companions, holding a flap of his cloak to his staff like a sail. The sight of the miracle caused astonishment among those present, two of whom left a written testimony that has come down to us. After this miracle, San Francesco da Paola was declared the “patron of seamen” and during the celebrations dedicated to him from 1 to 4 May, numerous processions take place at sea.

This area of Calabria was once home to Temesa: an ancient city that, according to Strabo, was founded by the Ausoni, a population of Latin origin who lived in what is now Campania before the pre-Roman Italic people settled there. The city fell first into the hands of the Brettii (or Bruzi), then of the Greeks, and finally became a Roman colony.

The location of the mythical city, which is also mentioned by Homer, is unclear. In the Odyssey, Pausanias reports that Polite, Odysseus’ travelling companion, was stoned to death by the inhabitants of Temesa for raping a local girl. From that moment on, Polite's spirit turned into the demon Alibant, who roamed the city and killed the inhabitants in revenge: to appease him, the citizens of Temesa had to build a shrine and sacrifice the city's most beautiful virgin as a tribute every year. Only the arrival of the Olympic champion Euthymus, a boxer from Locri, was able to defeat the demon forever and free the city.

The Sanctuary of San Francesco da Paola is located in the coastal town of Paola. Located in the hilly area, it houses part of the remains of the patron saint of Calabria (other relics are in Tours in France, where he died).

In 2000, to mark the jubilee, a new Basilica was inaugurated next to the old one, designed by Sandro Benedetti. The old sanctuary dates from the 16th century and features a magnificent Baroque chapel where the Saint’s relics are kept. The area is also home to the Fonte della Cucchiarella, whose waters, according to legend, were gushed out of the rock by the Saint to quench the thirst of the labourers who worked on the sanctuary; the numerous pilgrims continue to quench their thirst with this miraculous water.

More contemporary, however, is the miracle of the unexploded bomb dropped by the Anglo-Americans that fell into the nearby stream in August 1943: it is still preserved in a wall of the Sanctuary complex.

In the municipality of San Lucido, on the coastal chain of Paola, are the remains of the Eremo di Santa Maria di Monte Persano, built in the year 1000 by Basilian monks who, fleeing the Balkans, settled in the place where the monk Persano lived as a hermit.

The old basilica, accessible through a tuff portal, consists of a single nave with three bays and a cross-ribbed roof, characteristic of Byzantine churches. Numerous monastic orders followed each other in the Hermitage, until it was abandoned in 1893; in later years it also served as a refuge for local bandits.

Traditionally, the black Calabrian pig is bred in Calabria, one of the Italian breeds that developed from the Iberian pig strain.

The new breeds introduced in the 20th century seemed to relegate the black Calabrian pig to a marginal role, but thanks to the impetus of shrewd agricultural policies, it has made a comeback and gives local cured meats an extra something.

Soppressata, in particular, has become well known thanks to the lean meat of these pigs, which are suited to grazing and living in the wild (a valuable autonomy for farmers of the past). This characteristic improves both the taste and the nutritional value of the meat, making it suitable for the production of fine hams.

The nearest location that can be reached by bus is Fuscaldo, starting from the city of Cosenza.

The nearest location that can be reached by bus is Fuscaldo, starting from the city of Cosenza. 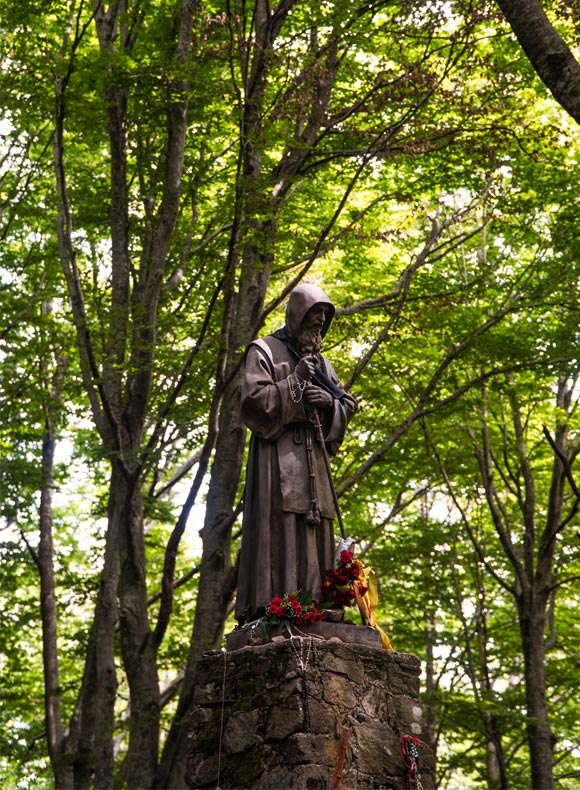 “We walk in the footsteps of St Francis of Paola, patron saint of seamen” 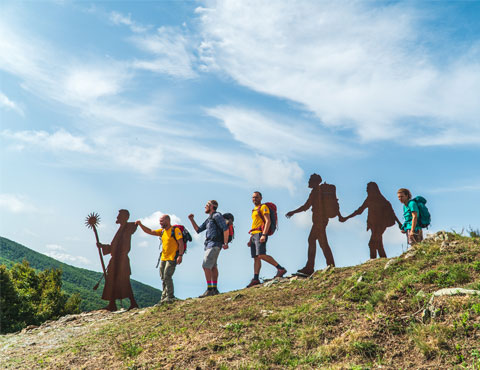