We enter the heart of the Sila Grande with a stage characterised by a first part on the narrow-gauge train of the Ferrovia della Calabria (Calabrian Railway) and a second part (with a good difference in altitude, but very easy) in the alternating pine and beech woods that characterise the park.

Do not let the length fool you! The first 15 km of the stage are covered by the Sila Train of the Ferrovia Calabra (which means that the pedestrian stage is about 25 km long). You can check the train’s timetable at: LINK.

Some sections of the trail that cross the hairpin bends of the road (immediately after getting off at Pedace station) are overgrown with brambles and invasive vegetation: be careful (mountain bikers are better off staying on the road).

There are no water points after Pedace: stock up well in the village.

We take the small train at Piano Lago station and enjoy the landscape from the carriage to Pedace station. After getting off the train, we start the climb (about 300 m height difference) on an asphalt road, cutting some hairpin bends with stretches of path, not always easy but still doable. Thus we reach the village of Pedace (the church of Ss. Pietro e Paolo, with its unique frescoed wooden ceiling, is worth a visit), from where we continue on a paved road to Serra Pedace.

From the village, after a gentle asphalt climb, we take a comfortable dirt track halfway up the hillside. We climb a little further until we arrive just below the pylons of the state road and then continue in a gentle up and down until we cross the Cardone stream on a bridge and start the long climb (about 900 m height difference) through the woods of Sila Grande. The route is entirely on a dirt road, which is almost always well maintained, and climbs with a steady gradient through pine forests (we also encounter larches, which are found here and on Mount Etna and from which pitch was once used to seal ships), which change to beech as the altitude increases (those who wish to interrupt the stage and arrive at Varco Rovale at an altitude of 1,432 m, can take path 428 on the left, which crosses the Torrente Catalano and Vallone Margherita valleys and leads in less than an hour to the Casello Margherita refuge, the welcome point of the Sentiero Italia). After many hairpin bends, we arrive near Serra Stella (1,693 m) and from there the gradient decreases considerably; we hike gently until we reach the asphalt road of the Strada delle Vette, the end of the climb.

We continue on the road for a short while, then we take the dirt road to the left and start the descent (about 400 m drop) to Camigliatello. After the first part over hairpin bends with a steeper gradient, we reach the valley floor and follow the course of a small river that flows gently downhill. We reach a large clearing and go around the cable car; from the car park behind it we take a path and continue our descent until we reach an asphalted road, whose course we follow while staying on the path. Finally, we reach the centre of Camigliatello with its tourist facilities and its architecture reminiscent of Trentino - aided by the surrounding alpine vegetation.

The area around the city of Cosenza, especially the municipalities in the Sila area such as Spezzano Piccolo, were administered by the Universitas Casalium.

In the 10th century, when the protection of the Roman Empire was lacking, Calabria was constantly the victim of Saracen and Lombard raids. In particular, in 675 AD, the Emir Abulcasimo invaded the Crati Valley. The inhabitants of Cosenza and the valley fled to the Presilani mountains and founded the Casali - groups of rural houses arranged in a crown around the town. In the following centuries, all the Casali united under the Universitas Casalium to manage the sylvan pastoral land and provide a livelihood for the population.

The Universitas guaranteed concessions and benefits to all citizens. The powerful of each era tried again and again to abolish these civil rights, but after tough struggles they were finally recognised by Henry VI of Swabia, probably also thanks to the intercession of his wife, Constance of Altavilla.

On the Sila plateau, the historic Sila Tourist Train has been running since August 2018, connecting Cosenza with Camigliatello Silano via the highest narrow-gauge railway in Europe (i.e. with tracks closer together so that the train can make tighter turns) at an altitude of 1,404 metres at the San Nicola-Silvana Mansio station.

The forests of Sila are the setting of the episode Amor omnia vincit from Virgil’s Georgica.

As well as recounting the fierce battle between two rival bulls in love, this episode tells us much about the importance of this area for Rome. The pine forests of the Sila were the most extensive in the empire and the resin of the trees was essential for waterproofing ships - it seems that the resin of the Sila was thicker and more resistant.

The episode also tells of the overwhelming passions in the area that is now Calabria: the forests of the Sila were the scene of heinous crimes, which Cicero attributes to the passion and pride of the warlike Bruzi people.

There are numerous rare species of fauna and flora in the Sila National Park.

In particular, traces of the otter - an animal threatened with extinction - have been found in recent years. Two other species characterise the park: the wolf is widespread in the Sila plateau; an autochthonous species is the southern squirrel (present only in Calabria and Basilicata), which is black in colour and more elongated than the other Italian species.

As far as vegetation is concerned, resinous pines are strongly represented in the forests of the Sila (hence the importance of the area for the Roman Empire). The vegetation of the Sila is also characterised by a prehistoric relic, the Woodwardia Radicans, one of the most beautiful ferns in existence. It is one of the oldest in the Mediterranean and is characterised by its long fronds. It is one of the species of the “tropical mountain flora”: unfortunately it is plundered by flower growers, so much so that the WWF has included it in the Red Book of Italian Plants in order to protect it.

Fausto Gullo (1887-1974), an Italian politician nicknamed “Minister of the Peasants” for his advocacy against latifundialism, came from this area (Macchia di Spezzano Piccolo to be precise).

He began his political career in the early 20th century as a councillor in Spezzano Piccolo, in the ranks of the Italian Socialist Party, before becoming a deputy of the Italian Communist Party in 1924. Gullo, along with Gramsci, was a protagonist of the strike following the murder of Matteotti by the fascists. His dislike of fascism sentenced him to confinement in 1926. After distancing himself from the Communist Party, he was a member of the Council of Ministers of liberated Italy after the war as Minister of Agriculture.

In Camigliatello Silano, in a renovated cowshed, there is the Nave della Sila, the Narrative Museum of Emigration, where you can relive the history of Italian emigration through photos, illustrations, dates, literary texts, poetic texts and journals.

Inaugurated in 2005, it is an indispensable monument to the memory of regional civil history. A place of culture that relates the old emigrations to the new migrations, a bridge between the past and the future, built in an environment reminiscent of the deck of a ship.

In Spezzano della Sila is the Santuario Foraniale di San Francesco da Paola, the third monastery built by the Saint after the monasteries of Paola and Paterno. It was opened in 1450 by the Order of the Minims with the economic support of the local population and entrusted to the collaborator Brother Paolo.

It ended with the arrival of the French government of Gioacchino Murat, like many other monasteries. At the beginning of the 20th century it was used as a wool spinning mill, and after the war it was inhabited by the Canossian nuns.

A typical product of the Silan mountains is the Sila Igp potato.

It has a yellow or red skin and can be yellow or white insite and is known for the excellent consistency of its flesh - excellent for gnocchi or for frying.

Temperature fluctuations and prolonged exposure to sunlight are optimal conditions for the tuber to grow. A typical recipe of the region is ‘mpacchiuse potatoes, i.e. attached: they are sliced thinly and cooked in a pan until they stick to the bottom and form a delicious crust.

A particularly well-known local product is Caciocavallo Silano. It owes its name to the fact that it matures in pairs on a pole.

Made from cow’s milk, the cheese is characterised by its oval or truncated cone shape. It has a smooth, thin, straw-yellow rind with a slight eye formation. The longer it matures, the more intense its flavour becomes, and it is common to eat it grilled.

A special way of preparing it is the so-called”'impiccagione”: the caciocavallo is melted over glowing embers and then spread on a slice of bread.

The Caciocavallo Silano has been protected by a PDO since 1993. It is one of the most common caciocavallo cheeses in southern Italy and some sources date its production to the 5th century BC.

The starting point can be reached by bus, starting from the city of Cosenza.

The starting point can be reached by train, starting from the city of Cosenza. 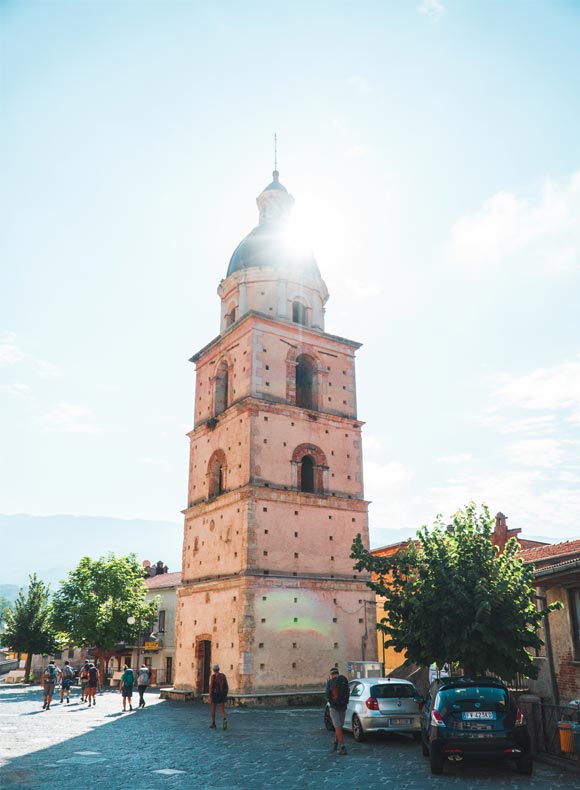 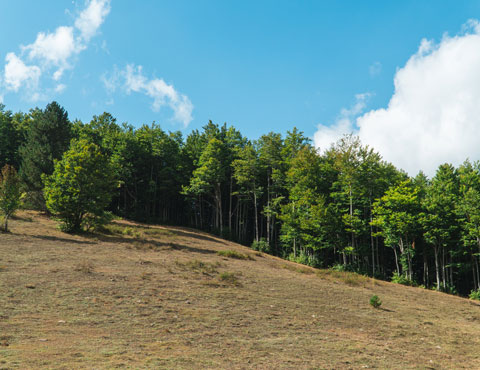