A relatively short stage, but not to be underestimated, with a challenging initial climb. Although the views are not very far, we appreciate the wooded surroundings protected by young beech trees.

The track on the ground is not always obvious (sometimes it is hidden by dry leaves, sometimes by tall grass) and you have to sharpen your gaze to see the markings (which are usually there); in general it is good to follow the GPS track.

The first climb (from which the trail to Cima Valle di Piedimonte starts) is very steep and slippery: it should be approached calmly and with caution.

No water points, take a good supply with you.

After leaving the refuge, we walk back the last stretch of the asphalt road of the previous stage until we reach the saddle from which the paths branch off. We take the path that climbs in the beech wood (about 250 m height difference) and we have a very steep stretch ahead of us that is quite complicated because of the slippery ground (luckily we are always in the shade); once we are on the ridge, we turn east and continue climbing (about 100 m height difference) to Cima Valle di Piedimonte (1.582 m), then we follow the ridge up and down (the path is not always clear, so keep an eye on the GPS track ), passing other peaks (Monte Ciesco Bianco, Le Toppole...), with some rare views of the valley below and, beyond, of Vesuvius and the plain of Naples.

Then we reach an asphalted road that leads to an old abandoned communication tower; after reaching the building, we take the path that runs along its right edge and, on a track that is not always easy, we quickly lose height (about 200 m drop) until we reach an asphalt road that we take to the right; after about 1 km we leave it and take a dirt road on the left, still in the shade of the woods. We take a path to the right (pay attention to the signs) and start climbing again (about 200 m height difference), sometimes with some bends, until we reach a new asphalted road, which we follow for a short distance; after reaching a subway, instead of entering it, we take the path to the right and head towards the television aerials; at their feet, we take the path to the left (not very clear at first) and begin the final descent (about 200 m drop), which offers us a beautiful panoramic view over the Avellino plain. After a short traverse through the wood, we finally reach the complex of the Sanctuary of Montevergine.

The Sanctuary of Montevergine was founded in 1119 by Guglielmo da Vercelli, a saint remembered in Catholic iconography for the  “miracle of the wolf”: he managed to tame a wolf that had mauled his work donkey, and from then on the wolf took the donkey's place in the daily chores - a Saint Francis ante litteram.

According to legend, William, an apostle and pilgrim with an adventurous life, decided to stay in a hermitage on the slopes of Mount Partenio after being attacked on a pilgrimage to Jerusalem. He was joined by a few disciples and founded the Virginian Congregation of the Order of Saint Benedict and the monastery, which was consecrated by the Bishop of Avellino in 1124.

Despite numerous disciples and several monastery foundations, William did not found his own order and remained faithful to the Marian ascetic spirit: even today, the monks of Montevergine, although they belong to the Benedictine order, wear the white habit instead of the classic black one in honour of the Virgin Mary.

Since its foundation, the monastery has been a place of pilgrimage and devotion; between the 12th and 15th centuries in particular, it flourished thanks to donations from the powerful of the time. During the Second World War, the monastery guarded the Holy Shroud of Turin, keeping it safe from the bombings and the Nazis who wanted to steal it.

Our Lady of Montevergine is the reference point for the LGBT world in Campania, which does not want to deny its Christian faith. Every year on 2 February, the day of the Candlemas, the so-called femminielli go up to the shrine to honour "Mamma Schiavona".

The Madonna of Montevergine is so called because, unlike the other six Madonnas of Campania, she is depicted with a dark complexion. She became a symbol of tolerance towards the homosexual world because of a miracle that happened in 1256: it is said that two men accused of homosexuality were tied naked to a tree so that they would die in agony. The Virgin Mary, overcome with compassion for the two lovers, intervened, warmed them with her light and freed them.

Another legend with which the jute of the Femminielli is linked is that of the cult of Cybele: before the sanctuary, there was a temple dedicated to the Roman goddess in this area and the priests of the temple (the Coribanti) often wore extravagant women's dresses at dances and orgiastic rites celebrating the birth of a new identity. Even today, Candlemas is a festive day when the sanctuary is filled with dancing, music and the celebration of the pride of being oneself.

Inside the sanctuary is an image of the Black Virgin Mary painted on huge pine boards four and a half metres high and two metres wide.

The reason why the effigy of the Madonna of Montevergine is dark-skinned is shrouded in mystery and its origins unclear. In the 17th century, rumours spread that the icon was painted by Saint Luke and came from the Middle East. Its origin from the Byzantine world seems to be established, but its history is still unclear.

Not far from Mercogliano is the elevated village of Capocastello, whose well-preserved medieval architecture can be admired. Besides the town walls and the ruins of the castle destroyed in the earthquake of 1656, there is the Antiquarium, inaugurated in 2009, which contains many artefacts from the Angevin-Aragonese period.

In summer, the village comes alive with the Castellarte initiative, an international festival of street artists.

In the nearby town of Avellino, the Palio della Botte (barrel race) takes place on 12 August, when the seven districts of the town compete in a speed race by driving a barrel along Corso Umberto primo.

The nearest location that can be reached by bus is Pietrastornina, starting from the city of Avellino. 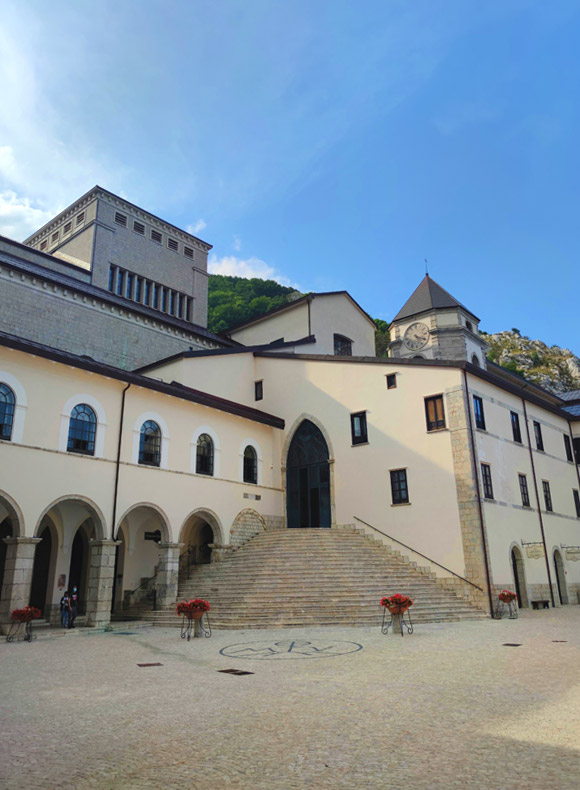 "In the coolness of the sanctuary's guest house, we enjoy the feeling of a monastic life of silence and meditation" 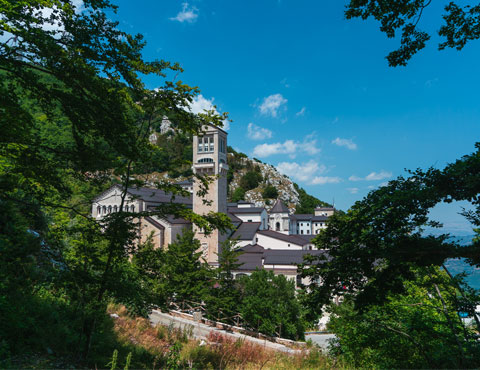