This stage was documented thanks to the contribution of Flavia Paparozzi.

Yet another spectacular stage of the Ampezzo Dolomites: medium length but with a quite significant difference in height.

We cross the magical Val Travenanzes, while admiring the Tofana de Rozes (3,225 m, eighth highest peak of the Dolomites). We finally arrive at one of the most spectacular mountain huts in the Dolomites, on the top of Lagazuoi (2,835 m), with an incomparable 360° view: Tofane, Civetta, Marmolada, Sella, Cinque Torri ...

Even in the absence of real technical difficulties, some sections can be complicated by landslides caused by the streams that we encounter.

Some parts of the path in the large central plateau of Val Travenanzes, along the stream of the same name, are difficult to identify - signs are rare, there are some stone cairns that are not always easy to identify: it is good to monitor the GPS.

In the same stretch, some fords must be carefully evaluated and it is sometimes necessary to take long turns to avoid getting your feet wet.

The only water point available is in the Cason de Travenanzes.

We leave the Albergo Ospitale to head on a comfortable flat carriage road (just below the paved road), towards the Valon Scuro parking lot. From there we take the path that descends to Plan de Lòa and we return to a wide road crossing the Ponte Outo with its magnificent views of the underlying gigantic gorges.

After passing the Ponte dei Cordes, we take the well-kept path to the right and begin the very long but slow climb along the Val Travenanzes (approximately 1,350 m height difference). The route is on the southern side of the valley located under the impressive walls of dolomite rock, blackened by the time, from where tiny waterfalls often emerge. The valley opens up and we walk level for a good stretch (spectacular!), skirting the Rio Travenanzes (sometimes we have to understand where and how to wade across, even if the direction remains intuitive).

After a stop at Cason de Travenanzes, under the gigantic mass of Torre di Nemesis to the east and Torre di Fanes to the west, coming out of the last trees we continue on a nice track. Admiring the striping of the immense Tofana de Rozes, we gradually move towards the Forcella Travenanzes. From there, we start the last portion of the climb which is relatively short but steeper.

Between 2000 and 2006 the chamois of Val Travenanzes were victims of a terrible epidemic of sarcoptic mange that affected all the Ampezzo Dolomites.

Mortality was very high (70-80%): of the approximately 3,000 chamois present in the Ampezzo area, it is estimated that no more than 800 survived.

The Ampezzo Dolomites Park is part of the forest and farming areas managed by the Regole ampezzane (Ampezzo Rules).

At the beginning of the Val Travenanzes is the entrance to the Path of the canyons and waterfalls.

The itinerary, spectacular like few others, leads to the confluence of the valleys of Fanes, Travenanzes, and Ra Vales. Along the route, you pass numerous landscapes and hydrogeological sites of high value.

The succession of pools, potholes, and waterfalls that characterizes the entire course of the Rio Fanes is of extraordinary beauty. The Basse di Fanes Waterfalls are among the highest and most abundant in the Dolomites, as is the Canyon of Travenanzes.

During the First World War, Monte Lagazuoi was the scene of the so-called mine war: one of the greatest insanities of mankind. Given the impossibility of tracking down the enemies, sheltered from the mountains, both armies began to dig tunnels under the enemy positions and then detonate said tunnels. Often the militia in charge of picking the tunnels, reduced to little more than larvae, heard the opposing soldiers pick the rock at a few meters of distance.

The Anticima tunnel (part of a complex system of tunnels and trenches that can be visited today) was used by the Italian army to place 32,664 tons of explosives which were set off on June 20 1917, leaving a deep wound in the mountain.

The chenedi are the Ampezzo version of the Trentino dumplings.

The famous stale bread balls are usually stuffed with speck or lard. There is a version with spinach for vegetarians.

Starting point reachable by bus, departing from the city of Belluno with a change in Calalzo and Cortina d’Ampezzo. 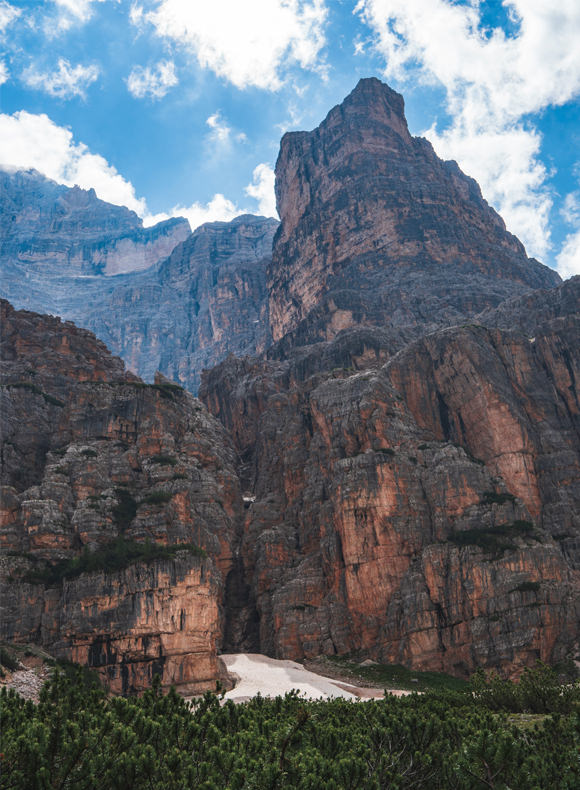 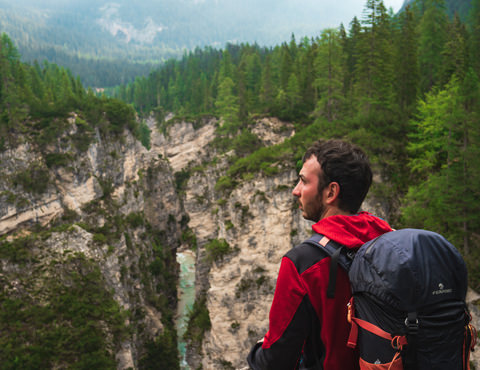