A demanding stage in terms of length, between asphalt and dirt road, but without major differences in altitude, offering some panoramic moments near the summit of Monte Capolavello.

The highlight of the day is undoubtedly the village of Castelsaraceno with its...the Tibetan bridge: the longest in the world!

Towards the end of the stage, the path behind the cemetery of Castelsaraceno is not well signposted and the first section is dirty and poorly marked.

After leaving the La Conserva hut, after an initial stretch on a road, we take a dirt track that goes around the summit of Serra Giumenta with some ascents and descents, then go slightly downhill (about 350 m drop) for the first 5 km, almost entirely along the ridge, before meeting an asphalt road. We take another dirt road and shortly afterwards, in a sharp bend (be careful not to lose the track), we take the path that climbs to the right (about 200 m height difference) to reach Monte Capolavello (1,231 m), which overlooks the ruins of some mountain pastures and offers a beautiful view.

With a long and gentle descent (about 200 m drop), which is always easy, we reach the bottom of the valley; after crossing a watercourse (Fosso Tasseta), we return to the asphalt road on the right, with a very easy descent. After a short climb (about 100 m height difference), we reach the Castelsaraceno cemetery, which we bypass on the right thanks to a path that is not very well-trodden and dirty in the first part. A zigzag descent (about 100 m drop) brings us to the village where the longest Tibetan bridge in the world stands.

We walk along the Tibetan bridge on a gravel road and finish the stage, after crossing the characteristic narrow streets, in the village square of Castelsaraceno.

Castelsaraceno is also known as the “village of two parks”: that of the Pollino and that of the Lucano-Val d'Agri-Lagonegrese Apennines, both national parks.

The area where the village of Castelsaraceno is located is called Tempa: a rock on which the Saracens probably posted themselves as lookouts between raids.

The beautiful heart-shaped village is famous for the rite of ‘ndenna, one of the many tree rites that exist throughout Basilicata and whose origins are lost in the myths of pre-Christian times. During the feast of Saint Anthony, a kind of Cuccagna tree is erected, called 'ndenna, from “antenna”. On the first Sunday in June, people go to the pass of Armizzone to choose the tree, which is then felled and carried by a crowd of faithful. In the weeks that follow, the tree, which is at least twenty metres high, is prepared and placed (exclusively by hand) in the square dedicated to the saint in Favino. Under the ‘ndenna, the faithful make offerings for a good year and challenge each other in collecting taccetti, strips of wood tied to the branches, by climbing to the top of the boot with their arms.

The ‘ndenna is the main character of another tree ritual, the “wedding of the trees” or the “married trees”: at the end of June, a beech trunk and the top of a pine tree (the 'ndenna or the cunocchia) are married to each other by placing the tip of the pine on the boot of the beech tree.

The Val d’Agri is not only known for its natural beauty, but also for the fact that 90% of Italy’s oil is produced here.

The Centro Olio Val d'Agri (COVA) has been producing both oil and gas since 2001.

The village of Castelsaraceno is home to the Museum of Shepherding.

Shepherding life has deeply marked the community and the museum tries to keep the knowledge of the past alive in an innovative way. There are several rooms: from the Space room dedicated to restored working objects, to the room of Popular Knowledge where, thanks to videos and interviews, you can listen to the inhabitants' stories about pastoral life. A dynamic and pioneering museum designed to help visitors immerse themselves in the culture of the village and discover its deepest soul.

For more information on opening hours and tickets, visit the following LINK.

In the summer of 2021, the longest Tibetan bridge in the world was inaugurated in Castelsaraceno.

With a height of 80 metres and a length of 586 metres, it connects the Pollino National Park and the Lucano-Val d'Agri-Lagonegrese-Apennine National Park.

A classic dish of Lucanian cuisine, particularly from the Val d’Agri, is rafanata grated horseradish, prepared especially during the carnival period.

Horseradish is a spicy root used in the north-east of Italy to make kren. The rafanata consists of a mixture of egg, pecorino cheese and grated horseradish, which is traditionally grilled. The result is an omelette with a very strong taste.

The nearest location that can be reached by bus is Lagonegro, changing at Maratea, starting from the city of Sapri. 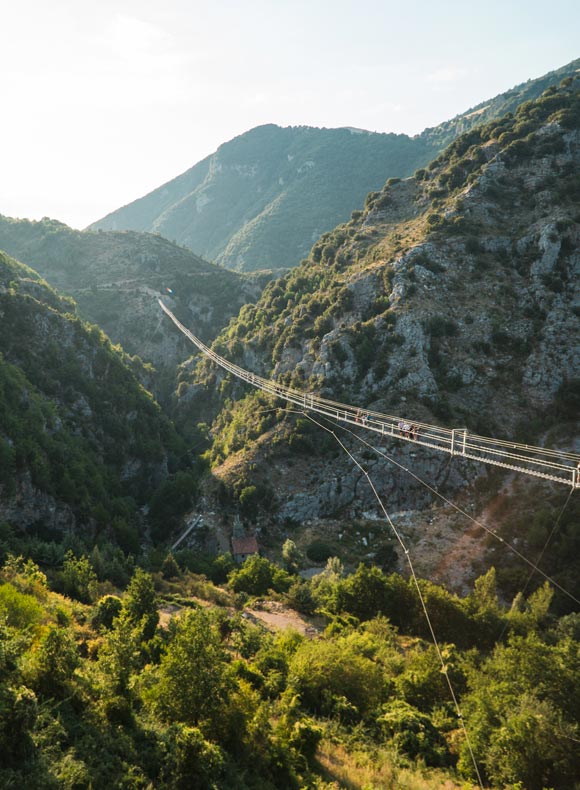 “Arriving in the village, it is impossible not to be impressed by the Tibetan bridge in Castelsaraceno, an engineering feat that seems to defy physics” 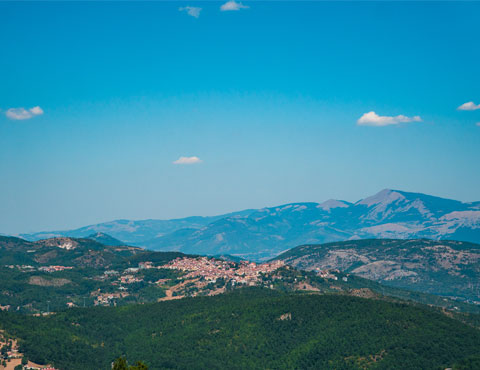