The stage, although not very long, requires considerable physical effort as it passes through the Lucano Apennine National Park and Pollino Park. It is very satisfying.

The stage requires good training due to the height differences and some steep sections.

The last section of the ridge leading to the summit of Monte Santa Croce is particularly “uphill”.

A stage that should be avoided in the summer months.

From the square in Castelsaraceno, we follow the asphalt road downhill, then turn right after a few hundred metres and immediately take the path on our left. We tackle the first climb (about 350 m height difference), which is very steep and continuous and leads us to a falsopiano from where we can see the summit of the day. After this section we cross a road and continue on a smaller asphalt road that leads us into the Favino wood, a beautiful and very dense beech wood where the signposting is always clear.

So we tackle the second climb of the day (about 600 m height difference) on a well-maintained but steep path. Completely immersed in the trees, we lose our horizon until we emerge from the forest. Shortly afterwards we reach the summit of Monte Santa Croce (1,893 m), which delights us with an impressive panoramic view of the Pollino peaks and the Lucano Apennine Park.

After enjoying the view and resting, we briefly follow the ridge and lose altitude; then we take the path to the left and begin the long, final descent (about 1,000 m drop). The route is easy and well signposted, with sections in a wood (we find two water sources along the way). After a final ascent and descent, we reach the centre of Latronico.

Latronico lies on the slopes of the imposing Monte Alpi and probably derives its name from the Greek latomia, meaning “stone quarry”.

Groups of Enotrians, a pre-Roman people to whom some believe we owe the name “Italia”, probably settled in this area: the mythical king of this people was actually called Italo. The first settlements in the village of Latronico date back to the early Middle Ages, when the peasant population sought refuge from Saracen and Lombard raids.

Latronico is now a centre for contemporary art, thanks to the public art project A Cielo Aperto, initiated by the Vincenzo De Luca Association, founded in 2005. with the aim of activating a “conscious localism” through contemporary art, where history, symbols and materials can enhance Latronico in the eyes of visitors, but above all in those of the inhabitants. A Cielo Aperto is the project curated by Bianco-Valente and Pasquale Campanella that has given the village back its soul, an “open-air” museum where numerous artists have spent extended periods of time. Since 2008, contemporary art has shed new light on the old stories in the streets of the hamlet.

Many artists have worked with the area and the local population to make these places speak. The word itself is the subject of Stefano Boccalini’s work, who asked the citizens of Latronico what word most connected them to the village, thus generating an emotional vocabulary that has now become part of the village thanks to the iron plates installed in the alleyways, on which the collected words have been engraved: a way of preserving the soul of the inhabitants, of revealing an ephemeral material and making it permanent.

Another important contemporary art initiative scattered throughout the Pollino area is Arte Pollino, which has promoted artistic development throughout the National Park area and brings a cosmopolitan touch to Basilicata thanks to collaborations with national and international institutions (such as Arte Continua, Arte Sella, Arte Fiera, Cittadellarte, the Castello Di Rivoli, the Fondazione Sandretto Re Rebaudengo, the PAN and the MADRE). Many works by great artists are exhibited in a variety of places: from the merry-go-round, designed by Carsten Holler and overlooking the Pollino mountains to the earth cinema by Anish Kapoor.

The Arte Pollino project has launched several initiatives to describe these often unknown places in an original way. These include Ka art, which aims to create a choral cartography of the region, or Un Altro Sud, which promotes contemporary art as a means of developing indigenous creativity.

Pollino National Park is an amazing area of mountains, thousand-year-old trees and huge canyons. With its 180,000 hectares, it is the largest protected area in Italy and stretches between Basilicata and Calabria in the provinces of Potenza, Matera and Cosenza.

The eponymous massif of limestone and dolomite rocks dominates the area to which it gives its name. The morphological composition has created numerous caves and deep gorges. The symbol of the park is the pino loricato, whose bark resembles the scales of a prehistoric animal or the meshes of a breastplate (lorica was in fact the Latin name for the breastplate of the legionaries); a truly unique tree, able to live in the most inaccessible places, amidst the rocks in wind and snow - it grows only in the Pollino and the southern Balkans. The loricato pine is just one of the 1,700 botanical species found in the park.

Among the many animal species in the park, it is easy to come across the black squirrel, a species that is extinct in other areas of Italy.

There are also numerous birds, including the golden eagle and the rare rock partridge.

In addition, the park area, with its 56 municipalities, offers enormous cultural diversity. There are also numerous Arbëreshë Communities that have passed on their Albanian identity since 1500 AD.

A traditional element of local craftsmanship is “needlepoint”, a special loomless embroidery technique that is several centuries old and whose origin is unknown, but which continues to be practised in the municipality.

It is considered unique in the country and some believe that its practice dates back to the time of the Greek colonies of Magna Graecia.

One reality includes various initiatives in the town of Latronico: it is the MULA+ Museum Centre.

Here you can visit the Archaeological Civic Museum, the Museum of Arts, Crafts and Rural Civilisation, the Museum of Thermalism and the Municipal Library. Considering the many artistic initiatives in the area, MULA+ responds to the need to continue the dialogue and collaboration between the different associations, uniting the past and the present and generating a contamination of people and ideas, like an educational and cultural incubator.

For more information on times and tickets, visit the LINK.

In the Latronico area is one of Arte Pollino’s works. It is Earth Cinema by the artist Anish Kapoor, a British sculptor of Indian and Iraqi Jewish origin.

Located in the Calda locality, the work is a 45-metre incision in the earth to which visitors can descend a staircase to enjoy the spectacle of the bare earth as a canvas. The light casts the shadows of the vegetation and the viewers, who thus become components of the work itself: “through a long slit, you can see the landscape and feel part of it”. A work that turns the notion of the myth of the Platonic cave on its head and proposes to contemporary man to consider himself a participant in the life of this planet. A message that perfectly sums up the artist's poetics in his exploration of the dialectic of opposites, especially the inside-outside.

Also in the village of Calda, you can visit the Colle dei Greci archaeological site, where numerous finds of Hellenistic origin have been unearthed, including swords, daggers, spindles, winged figures, statuettes, helmets, amber, bronze basins and even a complete human skeleton dating back 2,500 years.

Tools and ceramics from the Copper and Bronze Ages were found in the nearby Calda Caves. The finds are kept in the Archaeological Museum.

Typical of this area is the carosella flour, an ancient soft wheat used to make the Latronico biscuit, an 8-shaped tarallo that has travelled around the world thanks to the many emigrants from this area.

It goes perfectly with cured meats, cheese and wine.

Another typical local product is the so-called “rebel” chickpea. This is a small, white-coloured chickpea that is suitable for flour production.

The chickpea perhaps owes its name to the post-reunification raiders who lived and fed on these areas, but also to the chickpea's ability to withstand rough terrain and the passage of time. For this reason, ALSIA of Rotonda, the old seed bank, has supported a project to restore the chickpea.

The starting point is reachable by bus, starting from the city of Sapri changing at Maratea and Lauria. 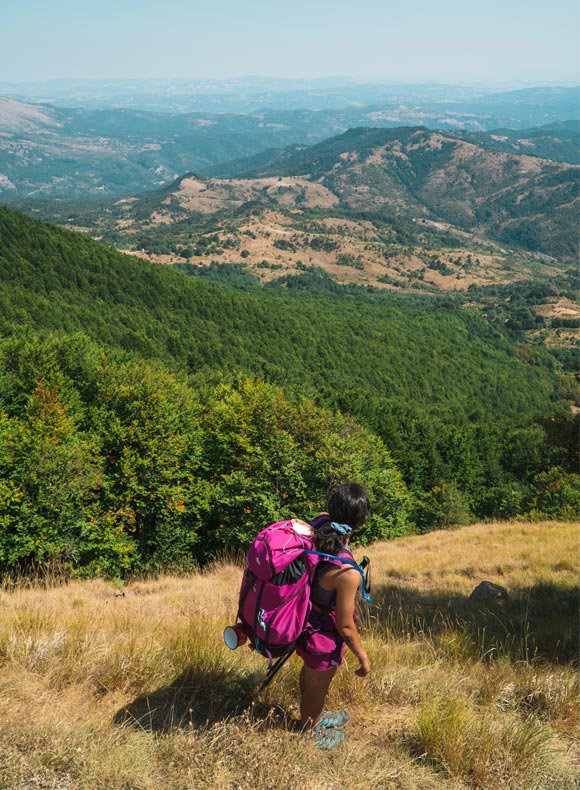 “The cows we pass on the way up the hill look at us as if to ask: where are you going in this heat?” 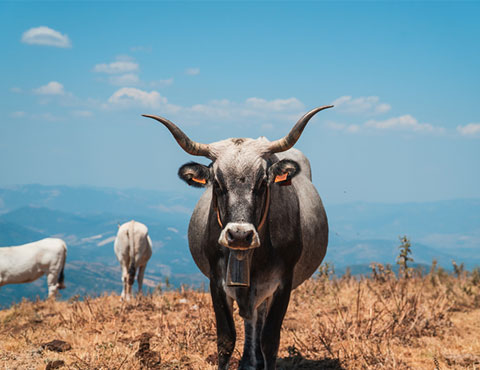