A stage of medium length, mostly in the forest, with no particular cause for interest apart from a few glimpses of the wooded slopes of the Serre and the pretty hamlet of Serra san Bruno with its beautiful Certosa.

The signage is very poor and the markings are irregular: look out for the GPS track.

Some sections (not a lot) are overgrown with brambles; be careful here.

There are no water points.

We leave Torre di Ruggiero and take a small road on the right towards a ruin, where we turn left. On a dirt road we begin the climb (about 350 m height difference) through the woods, on a surface that is sometimes a little bumpy but always clearly visible. In the last part, the path is overgrown by some brambles, so we have to make our way. In a saddle, at a crossroads, we turn left and cross the wooded peak of Monte Cucco (959 m), then gradually descend (about 200 m drop) until we reach the main road: we turn left, bypass it from above, cross it and, climbing over the guardrail, take a small road (asphalted, that soon becomes a dirt track) that first descends to the valley floor and then climbs (about 150 m height difference) in wide bends to Monte dell'Impiccato (903 m).

We descend (about 100 m drop) in the open among the ferns until we reach a new asphalted road, which we take to the left until we reach a large sawmill, where we turn right; shortly afterwards we leave the asphalt and take a dirt road; after a few kilometres on the plain we face a small climb (about 150 m height difference, all in the shade) to Colle Morrone (925 m). Then we slowly descend (about. 150 m drop), soon on asphalt again, until we reach the first houses of Serra san Bruno and shortly afterwards the beautiful village centre with its old, colourful houses.

The history of Serra San Bruno is linked to the monk Bruno di Colonia, who in his long and fascinating life played a leading role in the birth of one of the most important religious movements of Christianity, the Carthusians.

After founding the first Carthusian monastery in the Chartreuse near Grenoble in 1084, he had to abandon it at the behest of Pope Urban II. The alienation from his brothers and the atmosphere of prayer disturbed him so much that he decided to refuse the office of archbishop and return to his life of solitude. After fleeing from Rome to Calabria with the papal court following the invasion of the German Emperor Henry IV, he obtained permission to build a new oasis of peace suitable for his contemplative life in what is now the area of Serra San Bruno, thanks to the goodwill of Ruggero I of Altavilla. At the end of the 11th century, the labourers who worked on the construction of the Chartusian monastery of Serra San Bruno began to settle in the area and their dwellings formed the first nucleus of the village of Serra. In the following centuries, the Certosa, which passed to the Cistercian Order and then again to the Carthusians, was repeatedly rebuilt and extended. In 1783 it was destroyed by the earthquake that devastated Calabria and the monks had to abandon the monastery, which was abolished in 1808 and rebuilt in neo-Gothic style at the end of the century.

Today, a community of Carthusian monks lives in the Carthusian monastery, respecting the rule of enclosure, so the monastery is not open to the public.

On various occasions it has been speculated that Ettore Majorana, the famous physicist who mysteriously disappeared on the eve of the World War II (as reported by Leonardo Sciascia in his beautiful book The Disappearance of Majorana), and the pilot who dropped the bomb on Hiroshima, found refuge in the Charterhouse.

In his work Il ponte di San Giacomo (The Bridge of St. Giacomo), the anthropologist Luigi Lombardi Satriani speculated that the Halloween festival originated in the peasant world of Serra San Bruno, in particular the custom of hollowing out a pumpkin and carving it with the features of a human face. It is believed that the arrival of this tradition in the Americas is linked to migration processes. The tradition of “trick-or-treating”, according to the scientist, also originated in this area.

A few kilometres from the beautiful Certosa, on the site of the hermitage of San Bruno, stands the Santuario regionale di Santa Maria del Bosco, consecrated in 1094 in the presence of Ruggiero d’Altavilla.

Within the Serre Regional Park is the Bosco Archiforo, home to the tallest silver fir in Europe, a good 55 metres high and with a boot circumference of 5.5 metres. The forest, which consists mainly of silver firs, occupies a quarter of the entire park.

The red onion from Tropea is now a well-known product throughout Italy and beyond, and is one of the best varieties of the onion. Some attribute the introduction of this variety to the Greeks or Phoenicians.

It is traditionally grown on the Tyrrhenian coast and stands out for its excellent nutritional qualities and flavour. Its bright red colour is due to the abundant presence of anthocyanins (special plant pigments).

A typical dish is Spaghetti alla Serrese, a quick and tasty dish with tuna, anchovies, tomatoes, garlic, capers and the ubiquitous chilli pepper.

A typical sweet of the Commemoration of the Dead throughout the Kingdom of Naples is 'nzuddi, spiced almond biscuits.

The starting point is reachable by bus, starting from the city of Catanzaro changing at Chiaravalle. 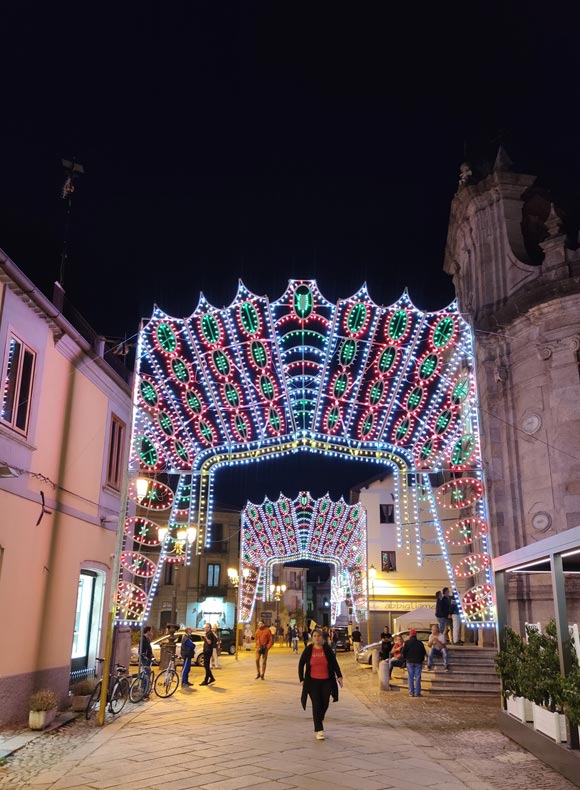 “If the sunny alleys are deserted when you arrive in the village, the village centre comes alive in the evening with colours, voices and a festive atmosphere” 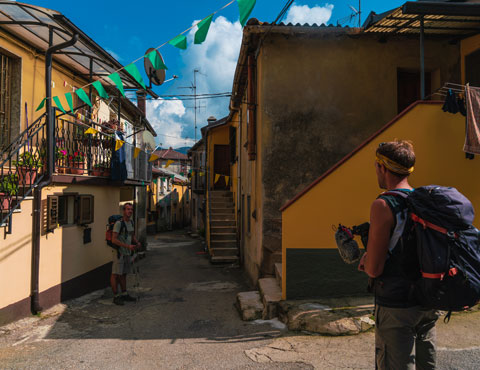