This is a stage of medium length and intensity, with a good gradient but with the presence of woods.

It begins and ends with two good climbs and for most of the day we are accompanied by views of the Golfo di Napoli and Vesuvio.

In some places you can use your hands to help, but these sections are easy and never exposed.

The only water point is about halfway through the stage (with a small diversion): bring plenty of water.

From Valico di Chiunzi we take a small road uphill (closed by a gate, that is usually open all the times) to the car park of the abandoned restaurant located under an old tower; from there we climb (about 200 m drop) on a path along a ridge in the dense chestnut wood, then descend to a saddle and tackle a traverse that leads to the pass called Tuoro di Stellante. We start climbing again (about 400 m height difference) and from the rocky wall of Vena Scalandrone the gradient increases considerably: we sometimes have to help ourselves with our hands until we reach the summit of Monte Cerreto (1,313 m), where we can enjoy a rustic bivouac with an excellent view of the peaks of the previous stage, the village of Tramonti with its terraces, Vesuvius and, to the south, the beautiful Valle delle Ferriere.

We start the descent (about 400 m drop) on a wide path for several kilometres; after reaching the northern shoulder of Monte Candelitto, the more tired can take the easy path that leads to the Rifugio di Santa Maria ai Monti, which is very nice and where you can break the stage; viceversa, we continue on a slight slope, soon reaching a carriage road that runs halfway up the hillside until we reach a crossroads of paths (several signs); we turn right and, after about 600 m, on the right, we find the signs to the San Giuliano spring, useful for getting a supply of water.

We continue through the woods and cross the tunnel of the state road to Agerola; then we leave the carriage road and return to the clearly marked path and start the last climb (about 300 m height difference), a little in the woods and a little open (but still facing north, so not particularly sunny), which takes us under the beautiful walls of the Molare (1. 444 m) and Canino (1,426 m) mountains. With a final climb, we reach the Scorchie Pass (where there is also a spring), where we meet an asphalted road that will take us to the San Michele hut in no time.

On the summit of Monte Faito is the Sanctuary of San Michele Arcangelo, whose foundation is linked with the saints Catello and Antonino.

The biographies of the saints are very uncertain. According to popular tradition, San Catello lived in the 6th century and was Bishop of Stabia. At a time of profound instability related to the war between Byzantium and the Lombards, there were many migrants fleeing the violent barbarian invasion, and as bishop Catellus offered protection to the fugitives, giving them refuge in the Lattari Mountains together with the citizens of Stabia. For this reason, Saint Catellus is venerated as the protector of foreigners

Among the fugitives was Sant'Antonino, a Benedictine monk who immediately formed a deep friendship with the Bishop of Stabia. The two retreated to a hermit's life in a cave that today bears the name of San Catello. During this time, the Archangel Michael appeared to the two in a vision and a light began to burn on the summit of Mount Molare. The two decided to build a temple in honour of the archangel on the site of a former pagan temple.

Legend has it that after this event, Saint Catellus was arrested for witchcraft and taken to Rome where, after various vicissitudes, he managed to convince the Pope to give him some lead for the oratory on Mount Molare. Some claim that Catellus was recalled to Rome by Pope Pelagius II to resolve administrative issues and that the local veneration of St Michael was a strategic decision to keep the Lombards at bay, who had not yet converted to Christianity but still recognised the figure of the archangel. After his return from Rome, Catellus began building the temple, while Antoninus became abbot of the Benedictine monastery in Sorrento.

Over the centuries, the shrine of the Archangel Michael became one of the most important in Europe. Catellus continued to be venerated as a saint in Stabia and throughout the Agro Nocerino-Sarnese area; numerous miracles were attributed to him: the rescue of the Jesuits in the flood of 1623 and that of the inhabitants of Castellammare in 1764; at the beginning of the 20th century, his icon miraculously stopped the rain of ashes after the eruption of Vesuvius; during the Second World War, in memory of the miracle during the eruption, two epigraphs were made by the shipyard in Stabia, which saved Castellammare from the bombardments.

Not far from the sanctuary, in Pimonte, you can visit the Grotta of San Catello.

Just below the grotto where San Catello and Sant'Antonino saw the Archangel Michael is the "ciappa del diavolo" (the devil's footprint): according to legend, this is the imprint left by Satan when he was chased away by the Archangel.

In the town of Castellammare di Stabia you can visit the archaeological excavations of ancient Stabiae, a Roman settlement with villas dating back to the 2nd century BC.

The area was discovered in 1749 with the excavations ordered by King Charles of Bourbon. After the initial enthusiasm, the project was put aside and it was not until the end of the 19th century that Pompei was discovered. Perhaps because of its smaller size compared to the more famous Pompei and Herculaneum, excavations at Stabiae were not taken into serious consideration until the turn of the millennium.

Most striking are the many villas, especially that of San Marco, which is very well preserved thanks to the large layer of ash deposited there over the centuries, and that of Arianna (named after a painting depicting Ariadne abandoned by Theseus), the oldest otium villa in Stabiae.

The Sentiero degli Dei begins in the municipality of Agerola, more precisely in the hamlet of Bomerano. A path of about ten kilometres (outward and return) that connects the hills with the sea of Positano. A walk of immense beauty along a former mule track where shepherds used to take their cattle to pasture. You can still meet one of these shepherds today: Antonio, who has decided to continue the family tradition. In addition to the view of the sea, you can also admire the beautiful terraces full of vines.

The typical sweet of Castellammare di Stabia is the Castellammare biscuit, created in 1848 by the brothers Giovanni and Francesco Riccardi.

It is a large, elongated pastry that, together with another speciality of the region, the sugar-coated tarallini, can be found all along the Campania coast.

Not far from Monte Faito is the town of Gragnano, where the famous Gragnano pasta comes from. However, it is said that Neapolitans come here not for the pasta, but for the "panuozzo", a huge, oblong sandwich made of pizza dough.

It was invented by Giuseppe Mascolo in 1984 and has become a classic local street food, perfectly combined with sasicc' è friariell' (sausage and friarielli).

The municipality of Agerola, located in the hills on the Amalfi side, is famous for its dairy products. It seems that the tradition of cattle breeding comes from the Picentini (the part of the Picenian population that was deported to these areas by the Romans) and that the Monti Lattari (formerly Lactaria Montes) owes its name to the goodness of its milk - despite the fact that it is an area poor in fodder.

In modern times, a native breed has excelled in terms of quality and quantity: the Agerolese. This is a cross between different breeds of the Podolica stock that found its final form thanks to the mercenary general Paolo Avitabile, who in 1845 received some Jersey cattle given to him by the British for the suppression of revolts in Afghanistan (using extremely bloody methods). The result of the crossbreeding of Podolica,started by the Bourbons, and the English Jersey breed, gave birth to the Agerolese breed, recognised in 1952.

The most famous and valuable products of Agerola cows are Fiordilatte di Agerola and Provolone del Monaco D.O.P.

On the terraces along the The Path of the Gods are the vineyards of Marisa Cuomo, a winery in Furore founded in the 1980s. The centuries-old vines have managed to survive phylloxera thanks to the volcanic soil - from the dry stone walls you can see huge trunks of vines that are very rare in Europe, as phylloxera destroyed all the oldest vines. The most famous wine is undoubtedly Fiorduva, a white wine made from a skilful blend of grape varieties.

Rifugio San Michele, directly below the sanctuary of the same name (reservations are required, the facility is not always open). Tel. +39351 110 3550 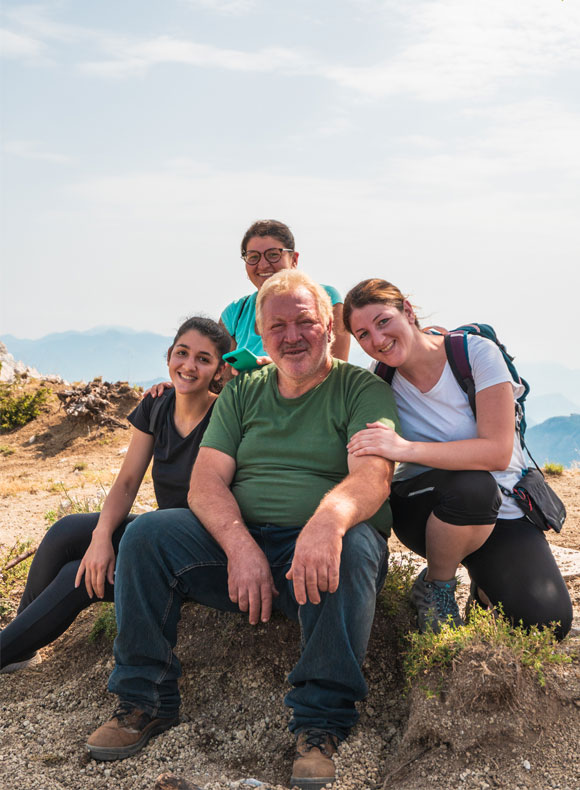 "A shepherd greets us and invites us to have a drink with him and his family... it seems impolite to refuse" 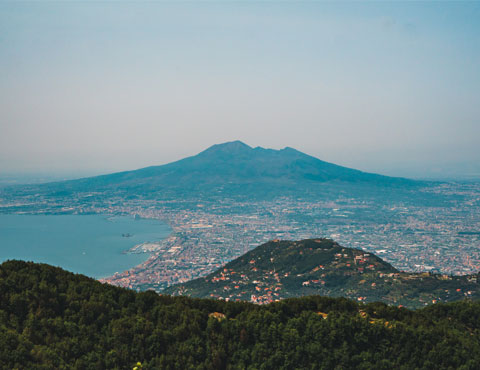