A short stage, but with a long and significant climb to Monte Fumaiolo (1,406 m), rewarded by a vast panorama over the entire central-northern Apennines.

We discover the historical sources of the Tiber and its beautiful waterfalls.

Skirting the asphalt road, we take the path to Ca 'di Gallo. Then, remaining on the same path, we start the long climb (approximately 550 m height difference) to Monte Fumaiolo. Once at the Passo di Montecoronaro, we take the road that climbs towards the town of Montecoronaro and we find the 00 path, which we follow by cutting the hairpin bends of the road.

Upon reaching the Poggio Mula d'Oro, the slope decreases and, crossing the wide plateau of the Barattieri, we arrive at the locality of I Sodi (1,284 m). We turn left on the road, then shortly after we resume the path on the right. It is worth it making a small detour to climb to the nearby peak of Monte Fumaiolo (1,406 m), which offers a vast panorama: from the Romagna Riviera to Monte Amiata, from the peaks of the Marche Apennines (Alpe della Luna, Monte Nerone, Monte Catria) to the northern Apennine ridge (Monte Falco, Monte Falterona ...).

Retracing our steps, we go down to the Fumaiolo pass and take the easy path that soon leads us to the sources of the Tiber river. Continuing through the beautiful beech forest in easy descent (approx. 200 m drop), we cross the asphalted road and follow it to the right for a hundred meters, then we resume the path on the left, admiring the Tiber waterfalls and the cliff of Balze, a meeting place for many climbers. Once back on the road (a campsite is not far away), we follow it to the village of Balze.

The origin of the name of Monte Fumaiolo is under discussion. There are several theories: one indicates its peaks are often surrounded by thick clouds (the "fumes"), another regards the numerous charcoal burners who used the forests of the mountain for the production of coal, thus making fumes. One last option, claims that the original name was "Fiumaiolo", due to the fact that it hosts the sources of three rivers, Savio, Marecchia and ... Tiber.

In 1923 Benito Mussolini decreed a modification of the border between the provinces of Forlì and Arezzo to include the source of the Tiber, ”sacred river to the destinies of Rome", in its birth province, Forlì. To sanction the event, a marble monument was arected at the source with the symbols of imperial Rome (the eagle and the Capitoline wolf), and in the village of Balze di Verghereto was placed a column from the Roman Forum to indicate the beginning of the road that climbs towards the mountain.

It is certainly suggestive to drink the clear and fresh water of the river that bathes the Eternal City.

From Balze, a fast path leads to the pleasant Hermitage of S. Alberico, founded in a gorge by the monk Romualdo (the founder of the Hermitage of Camaldoli), before the year 1000.

During the 15th century, the hermitage was merged with the order of the Camaldolese. It bears the name of a monk belonging to the chivalric order of San Giorgio, who decided to retire here to an ascetic life.

A place with a marked spirituality, it still hosts a hermit: it is good to respect the silence and stillness that reign here undisturbed.

The potatoe tortello alla lastra is a street food of yesteryear from the Tuscan-Romagna mountains and demonstrates the ability of the mountain people to invent a tasty, substantial, and genuine recipe, with a few simple ingredients.

Since ancient times, during the transhumance, the shepherds brought with them large stocks of these tortelli.

The dough is made of flour, water, and salt and rolled out in a thin sheet, the filling is the mixture of boiled potatoes flavored with lard, onion, celery, carrot, sage, tomato, garlic, eggs, nutmeg, and pecorino. Later cut into squares, they are cooked on a refractory stone (the "lastra") in direct contact with the fire, which gives them characteristic flavor and color. Also very tasty is the version called “bartolaccio” (or bartlàz, in dialect), filled with potatoes, bacon, and cheese.

The origin of the tortello alla lastra seems to be very ancient and dates back to the orientalbarbarians who arrived here after the fall of the Roman Empire: the type of cooking was in fact certainly congenial to nomadic populations, who thus avoided having to carry the pots with them.

Departure point reachable by bus, starting from the city of Cesena with a change in Bagno di Romagna. 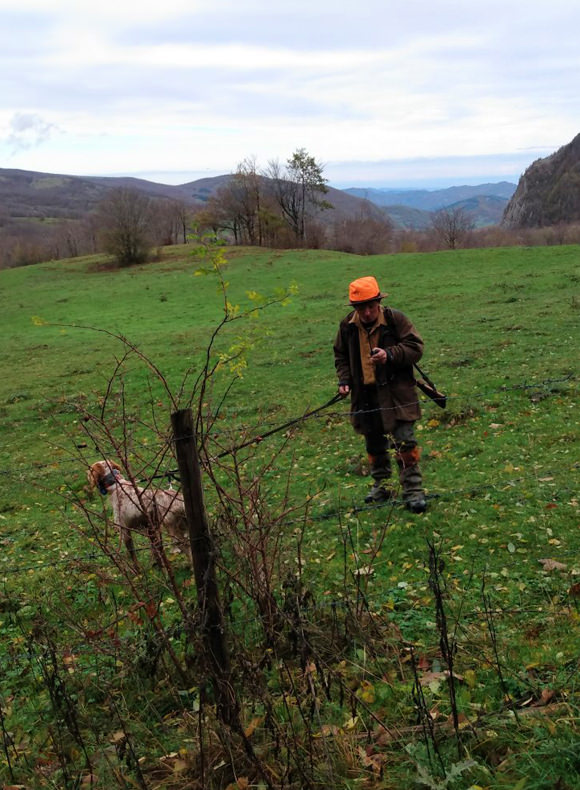 “Even the imperial eagle that watches over the Tiber seems plucked from the inclement wind...” 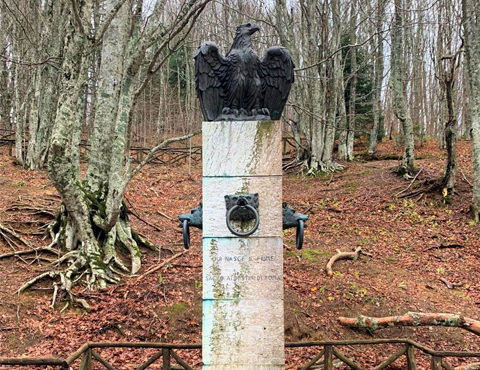