A stage of medium length, very varied: penalised by a first part on asphalt, it does, however, offer a visit to the beautiful natural hot springs of the Fiume Caldo, the crossing of the Bosco di Angimbè and finally a visit to the marvellous Greek temple of Segesta.

The section from the hot springs to the temple of Segesta is a variation on the Sentiero Italia (which follows the development of the motorway), preferred to admire the beautiful Bosco di Angimbè and Valle Gaggera.

Not recommended on summer days.

We leave the town of Alcamo and cross its industrial area. Then we take a small asphalt road and begin a long and gradual descent (about 200 m drop) that soon turns into a dirt road. With some asphalt interruptions, we walk under the motorway for about 1 km before arriving at the free thermal baths of Segesta, definitely worth a detour and a break (if you go up the Fiume Caldo, you will find a cave where the water has a temperature of about 47 degrees; the walls of the cave are filled with mud, excellent for regenerating the skin).

Back on the road, we turn onto the provincial road and then take a wide dirt road on the left that leads uphill (about 200 m height difference) to a wide saddle. We then walk along the slope for a short distance to reach the Bosco di Angimbè (Angimbè wood), which we climb (about 100 m drop), passing the didactic centre of the Bosco di Angimbè Association (an excellent place to take a break, thanks to its facilities). After leaving the woods, the path descends slowly (about 200 m drop). We reach a small asphalt road, which we follow for 1 km before continuing along the dirt road and enjoying the rural landscape of the Valle Gaggera.

When we reach the bottom of the valley near the old railway station of Calatafimi, we turn right and stay on a dirt road. Then we turn onto the state road to cross the river Gaggera and, immediately afterwards, take a small road to the right that goes through the fragrant orange groves of the typical Calatafimi Ovaletti (the local oval-shaped oranges). After passing a ford, we go through some vineyards until we meet the road, which we follow for the last kilometre until we reach the car park below the temple of Segesta. This is how we end the stage, with a view of the ancient Greek columns in a setting of rare beauty.

Segesta was an ancient city built by the Elymian people, of which a temple in the Doric style and a marvellous theatre from the Hellenistic period still remain.

The foundation of the city certainly dates back to the 9th century BC: the Greek historian Thucydides wrote about the Trojan refugees who founded the city. According to myth, it was Aceste who founded Segesta, while Virgil claims that it was even Aeneas himself who founded the city to give his fellow citizens a rest before continuing his epic journey to Rome.

Segesta’s ancient history was marked by constant conflict with neighbouring Selinunte. During the Punic Wars, the city allied itself with Rome because of its alleged common Trojan ancestry and was granted the status of a free city after defeating the Carthaginians.

The city's development came to a halt in the 5th century with the invasion of the Vandals, who destroyed the ancient city.

The troops led by Garibaldi landed in Marsala on 11 May and were met by a thousand young Sicilian volunteers who joined the veteran Alpine fighters; on 15 May 1860 they met the army of the Two Sicilies. The battle, in which the Bourbon troops retreated, led to an uprising in the city of Palermo.

At the Pianto Romano, where the soldiers fought, stands the monument with the ossuary of the fallen.

Near Segesta is the Bosco di Angimbè, a cork oak forest characterised by the abundant presence of water and the presence of numerous geobanks and cisterns. Even today, the barks of the oaks are used to make bottle corks.

On an area of 213 hectares is the headquarters of the Associazione Angimbè (Angimbè Association), which works to promote sustainable tourism in the region.

The temple, also called the Tempio Grande, dates back to the 5th century BC and stands on a hill outside the city walls. It consists of 36 columns (6x14), 10 metres high and still intact. It differs from the classical Greek temples in that it lacks an internal structure. The issue has provoked numerous debates: some scholars tend to consider it a sacred complex that did not serve Greek worship. The doubts are difficult to dispel, as the work was never completed.

The theatre, built on Mount Barbaro, has its back to the agora and offers a splendid view of the surrounding hills stretching to the sea. It was built in the 3rd century BC from local limestone and stands out for its architecture, which is somewhere between Greek and Roman theatres. Today it is the venue for numerous theatre performances and concerts.

To the west of Calatafimi, on a hill, stands Eufemio Castle, built to defend the town of Segesta.

It was used by Frederick's troops II against Muslim rebels and was the seat of the local feudal lords in the following centuries. The castle was abandoned in the second half of the 19th century. Today, only two of the three original towers remain. Inside, you can see graffiti of prisoners, a reminder of the time when the castle was used as a prison.

Not far from the archaeological park are the terme di Segesta (hot springs of Segesta).

The springs are located along the river Crimiso, which was once the site of numerous mills and whose name is linked to Greek mythology: the river god Crimiso created the hot springs to warm the nymph Egesta, who fled from Troy.

The very hot thermal water (it reaches temperatures of 47 °C!) is also mentioned by Strabo and Pliny the Elder for its therapeutic effects. Along the pools are the remains of an Arab bridge.

Typical of Calatafimi is the Cucciddatu, an ancient bread (dating back to 1600) baked on the occasion of the feast of the Crocifisso Padrone of Calatafimi Segesta.

The characteristic sun-shaped bread is a dough made of ground semolina, water and leaven; it can be kept for weeks.

A traditional dessert is the cassatelle di Calatafimi (cassateddi), a kind of deep-fried calzone filled with ricotta, lemon zest and chocolate.

A unique product from this area is the Calatafimi Ovaletto.

This is a late variety of orange that has an incredibly oval shape. It was bred in this area in the first decades of the 20th century and is a derivative of the Calabrian ovaletto. The thin-skinned fruit with its intense and pleasant flavour is a product that is threatened with extinction due to its difficult market position. Local producers are campaigning for it to be included in the Slow Food Presidia.

Here is the  LINK to check the timetable. 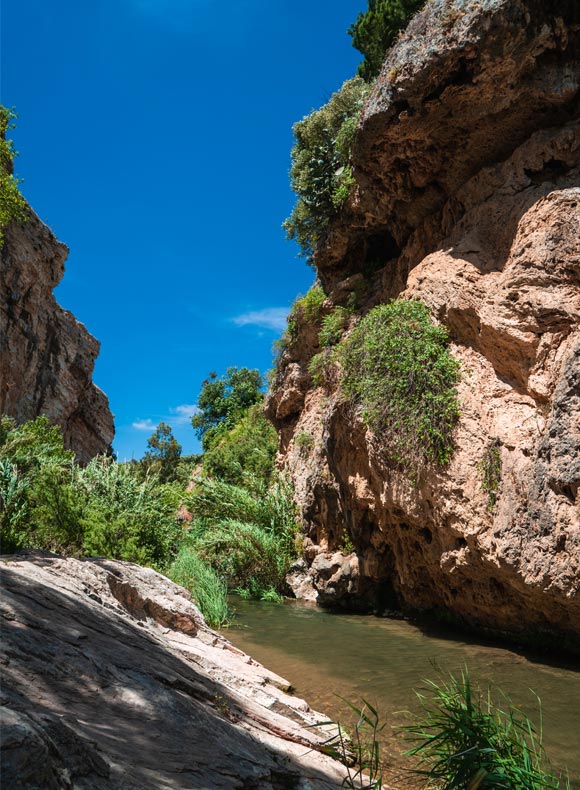 “Even when walking, one must not neglect self-care: With this in mind, we climb the Fiume Caldo to treat ourselves to a natural mud treatment in the open air” 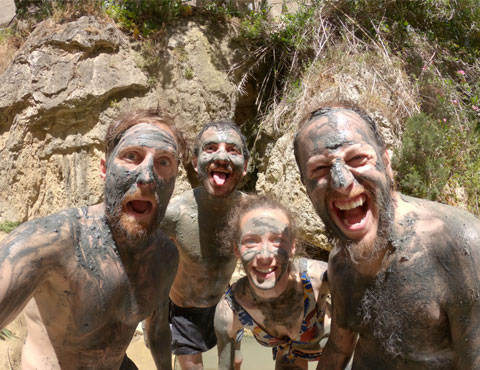