This is a long but easy and very gentle stage with a minimal difference in altitude.

We leave the last peaks behind us and walk through a rural landscape, between cultivated fields and Lago Poma, to arrive in the beautiful town of Alcamo.

Signposts are not always present at crossroads, monitor the GPS track.

The area is used by shepherds to graze their flocks: several sheepdogs are encountered, be careful.

The only water point is a few kilometres from the start, take a good supply.

We leave Dammusi and continue southeast along the slopes of Monte Signora on a dirt road that soon becomes asphalted. Then we turn left and begin the descent (about 250 m drop), still on an easy road (alternating unpaved and paved sections), towards the bottom of the valley; the beautiful Lake Poma appears to the northwest.

After crossing the provincial road, we continue along the dirt track that shortly approaches the Jato River; we cross it on a concrete bridge, then tackle the small ramp towards a sheep pen and climb slowly (about 150 m height difference), crossing a second provincial road perpendicularly. We continue almost level, with some minimal ascents and descents, to pass a third provincial road; the town of Alcamo appears on the horizon.

Now we continue briskly on asphalted roads, passing small cultivated valleys, until we reach the slightly ascending road that leads to the beautiful town of Alcamo.

Some trace the foundation of Alcamo to the legendary Sican king Cocalo and the impregnable city of Camico. When the Saracens arrived in Sicily, they called the area “casale di Camico”, in Arabic Mezil al-Qamah.

Others claim that the name Alcamo refers to the term Al-Qamah, which means fertile land.

In the municipal territory of Alcamo is the Riserva naturale Bosco di Alcamo (Bosco di Alcamo Nature Reserve), established in 1984, on the summit of Monte Bonifato.

Mount Bonifato is a limestone massif that overlooks Alcamo and is characterised by the remains of the fortified town of Bùnifat and the presence of a prehistoric necropolis. The top of the mountain was already inhabited by the Elymian population and was an ideal place to control the surrounding territory, especially the Gulf of Castellammare. Lycophron of Alexandria claimed that the Greeks who had fled from Troy had founded a city on Mount Bonifato. Thanks to the abundant water, the settlement of Bonifato was able to expand and was granted the construction of Ventimiglia Castle during the Swabian period.

In addition to the ruins of the mediaeval village of Bùnifat, the mountain is home to the Santuario della Madonna dall'Alto, to which people used to make pilgrimages in earlier centuries to summon the rain.

The nature reserve is the result of reforestation that began in 1921 with the introduction of Aleppo pines and cypresses, which led to the reappearance of native deciduous trees. The reforestation work also allowed numerous other wild plants to grow, including several species of orchids, euphorbias and peonies. There are numerous species of animals, especially birds: the place is perfect for bird watching.

An important poet from Alcamo is Cielo d’Alcamo, to whom we owe the fool’s poem Rosa fresca aulentissima. Dating from the first half of the 13th century, the poem plays on the classic themes of chivalric poems in which a shepherdess is wooed by a knight.

Cielo d'Alcamo is one of the most influential representatives of the Sicilian school and his work is one of the rare examples of Italian vernacular with a clear Sicilian influence. For a long time, the joke poem was thought to have a folk origin, as it was cheeky and comically worded and was supposed to be accompanied by music. Cielo, long known as Ciullo, must have been a court jester with an excellent culture.

Giacomo Serpotta, an important sculptor and plasterer of the 18th century, was also from Alcamo. The artist produced his works throughout Sicily and all of them were distinguished by their brilliance, achieved by adding marble powder to plaster and lime, later known as the allustration technique. Serpotta's works, which preceded the Rococo style, can be admired in the monastery of San Francesco di Paola and in the church of Saints Cosma and Damiano.

Numerous fossils have been found in the Geosito Travertino of the Cappuccini quarry, north of Alcamo, including a dwarf elephant skeleton now kept in the Gemmellaro Museum in Palermo.

Near the centre of Alcamo are the ruins of the fortress of Calatubo, easily visible from the highway.

It is located on a hilltop and was built on an ancient settlement before the 10th century. Over the centuries, the castle played an important role in controlling the entire area, visually connecting the outposts of Carini, Partinico and Castellammare del Golfo. During the Swabian period, the fortress was transformed into a baglio, housing the various farmers of the area.

It remained in good condition until the 20th century, but was then destroyed by the 1968 Belice earthquake. Not far from the archaeological remains is the Cuba delle Rose, an ancient Arab spring. It served as a water supply for the inhabitants of Calatubo and numerous legends have grown up around it, including that of a princess who secretly grew roses there that only bloomed at night. Legend has it that every 19 February, the princess's ghost comes out of the castle with a candelabra to go in search of her roses.

Alcamo is home to the Museo di Arte Contemporanea M.A.C.A. (Museum of Contemporary Art), opened in 2017 and housed in the Complesso Monumentale del Collegio dei Gesuiti.

A place of experimentation with visual languages, where educational projects of all the arts are articulated. A way of redesigning the urban space under the direction of the Creative Lab, which has given Alcamo a contemporary artistic breath.

For more information about the Monato and opening hours, visit LINK.

Nearby Camporeale is home to the Valdibella Vegetable Gardens, a farmers’ cooperative founded in 1998 to promote organic and sustainable farming. The cooperative, which is active in the fairtrade market, has managed over the years to promote local small-scale production, giving back dignity to the farmers’ work and the land, and abolishing the culture of monoculture. A challenge that, from the beginning, has focused on respect for biodiversity and the preservation of local products. One of these is Timilia wheat, an ancient variety of wheat that has been saved from extinction also thanks to the support of Valdibella (which watches over it and can produce the seeds).

The cooperative brings together the harvests of about twenty small producers and processes them to get the best out of the product. Among the many products, Donner almond milk and the winery's many wines stand out, especially Zibibbo, a white wine that is not made into a fortified wine as is usually the case.

Of the many wines produced in the Alcamo area, Alcamo DOC is certainly the best known. The recognition of the appellation for Bianco d'Alcamo in 1972 was extended in the following years to red wines, rosé wines and sparkling wines.

The grape varieties in the Alcamo area DOC are characterised by espalier cultivation. Catarratto is certainly the most widespread white grape variety, flanked by Damaschino, Grecanico and Trebbiano.

A native fruit of the Alcamo area is the Purceddu melon, also known as Purceddu d'Alcamo.

It is an oval melon with a green, wrinkled skin; a rustic variety that has apparently reminded some of the shape of a piglet. Also known as “winter melons”, they keep for a long time and, indeed, the taste becomes richer with the passage of time. The product, whose production has declined considerably over the years, is now protected by the Slow Food Praesidia.

A typical bread from nearby Partinico is Muffoletta, a round bread with ancient origins - some even go back to the ancient Romans.

It has clear Middle Eastern influences and is the bread used for pani câ meusa, a sandwich filled with veal spleen that is a classic in the Palermo area. There are many variations; the classic version is sprinkled with sesame seeds.

There are several accommodation facilities in Alcamo.

The nearest location that can be reached by bus is San Giuseppe Jato, starting from the city of Palermo. 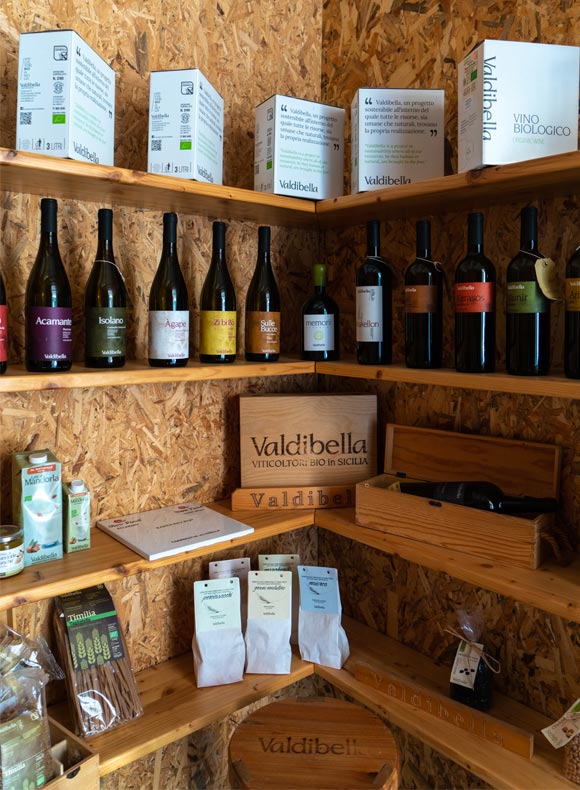 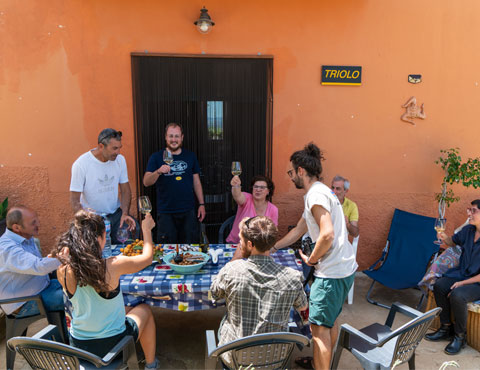