A long stage with little difference in altitude, leading from the hinterland to the coast, with agricultural landscapes in the first part and views of the sea in the second.

We walk on asphalt for a long time.

Some parts of the last section (at the foot of Pizzo Monaco) are on somewhat rough terrain; in the same section, the path, often overgrown with tall plants, is not very clear and it is necessary to monitor the GPS track.

We leave the temple of Segesta and turn onto the provincial road, cross under the motorway and follow it for a bit. Then we cross the river Gaggera and after about 1 km we turn right onto the simple dirt road, which we follow alternately up and down. We continue for a long stretch, passing the slopes of Monte Scorace and then slightly downhill until we reach the village of Balata di Baida, an excellent place to take a break (there is the first well).

Leaving the village, we lose a little altitude cutting the hairpin bends of the asphalt road, then we cross the Sarcon stream and begin the climb (about 150 m height difference), first on a wide path, then through the fields (watch out for the markings!) until we reach a dirt road and arrive at the Castle of Baida, which looks like something out of a Zorro film. We continue on a paved road and enjoy the view of the sea until we reach Visicari, where we take a small road on the left and shortly afterwards the path that branches off to the left and winds its way between Pizzo Monaco and Pizzo Varili. The path soon becomes invisible, the brambles are treacherous and we have to rely on our intuition and the GPS. The track is complicated but of great beauty, amid wild vegetation and some reddish rocks.

Then we go downhill (about 350 m drop) until we come across an old, bumpy dirt road, which finally turns into an asphalt road and we enter the pretty village of Scopello at the foot of the old watchtower. We treat ourselves to a well-deserved swim on the beautiful beaches below.

The Riserva Naturale Orientata dello Zingaro (Zingaro Nature Reserve) is a protected area between the crystal clear sea and the limestone cliffs, where there are beautiful bays that are now visited by thousands of tourists: a treasure trove of unspoilt nature.

It was founded in 1981 after protests against the construction of a coastal road that would have connected Scopello with San Vito along the coast - the first tunnel can still be seen in Scopello.

The area was inhabited by a small group of farmers until the 1960s, of whom a scattered village remains where you can live with permission from the reserve. The bays of the reserve were one of the hideouts of the pirates who plundered these seas, and more recently of several gangsters, including the bandit Giuliano.

Many endemic plant species have been found in the Riserva dello zingaro (Gypsy Reserve). The numerous birds include the peregrine falcon and one of the last ten pairs of the Bonelli's eagle in the region.

On the coast is the beautiful tuna fishery of Scopello, built in the 13th century and enlarged throughout history, and since 1468 it has belonged to the Trapanese family of San Clemente.

The tonnara was an ancient method of tuna fishing that had a great influence on the Sicilian economy. Introduced by the Arabs in the year 1000, tuna fishing was further developed by the Spanish government until the height of the 19th century. Today, the tonnara has been abolished in part because of the cruelty of the tuna fishing, in which large numbers of tuna are caught in a complex system of nets.

Despite the cruelty, the tuna trap system was a model of sustainable fishing, as it allowed for a sparing selection of migratory flows, the disappearance of which is now regretted. The tonnara of Scopello stands out from the others for its ancient structure and is a great example of industrial archaeology where tuna was processed. Like many others on the island, before its closure it was owned by the Florio family, who greatly increased the number of tuna caught in the Sicilian tuna fishery between the 19th and 20th centuries. After the last slaughters in the 1980s, the tonnara was later used for biological research.

What makes the tuna fishery of Scopello even more impressive, apart from the glistening sea water, are the Faraglioni of Scopello. They are covered in dense vegetation and have served as a backdrop for numerous films. The name of the municipality comes from the Latin word scopulus, which means “rock”. The Mediterranean herring gull nests among the rocks of the Faraglioni.

On the top of Mount Inci are the ruins of Inci Castle, also known as “baglio di Inci”. This was the seat of the feud of Inci, one of the most important in western Sicily.

The importance of the castle dates back to the passage of Emperor Charles V of Habsburg on his way to Tunisia: legend has it that the sovereign carved a cross into an olive tree which, as it grew, became the emperor's olive tree. The construction of the castle dates back to antiquity and has seen the change of numerous feudal lords over the centuries; the building remained inhabited until the 1960s - about fifty people lived there and the post office, the barracks of the carabinieri and the school were located inside.

The Baglio’s centuries-old history was brought to an end by the terrible earthquake of 1968 that shook mid-western Sicily.

Do not miss pane cunzato, a typical Sicilian street food (especially from the Trapani area); the dialect term refers to spiced bread.

It is a sandwich filled with tomatoes, Sicilian salt and anchovy fillets, dressed with plenty of extra virgin olive oil and dried oregano. This recipe originated in the kitchen of the poor and was a tasty way to enrich the bread with the few ingredients available.

Typical of Palermo gastronomy, on the other hand, is the Sfincione, whose name is said to derive from the Latin Spongia, “sponge”, and refers to the softness of the leavened focaccia dough, which is flavoured with tomatoes, onions, anchovies, oregano and Sicilian cheese - typically Caciocavallo.

There are several accommodation options in Scopello.

The nearest location that can be reached by bus is Calatafimi, starting from the city of Trapani

Here is the LINK  to check the timetables. 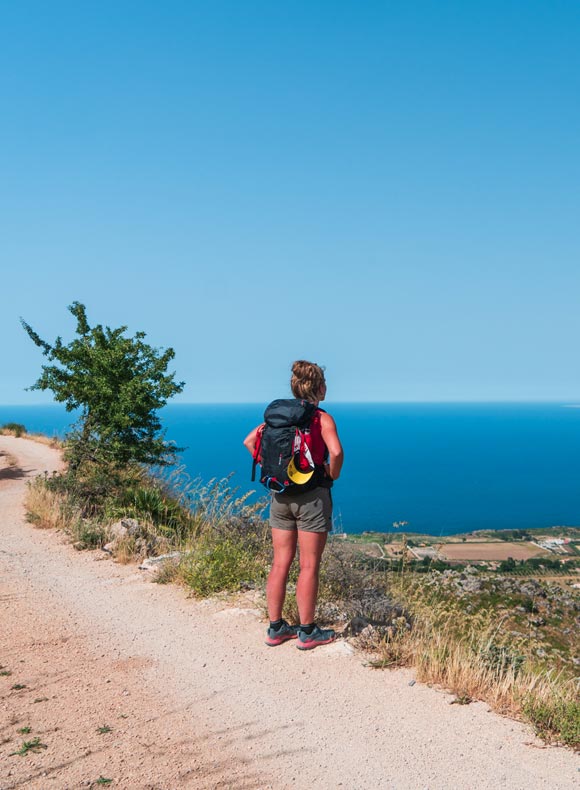 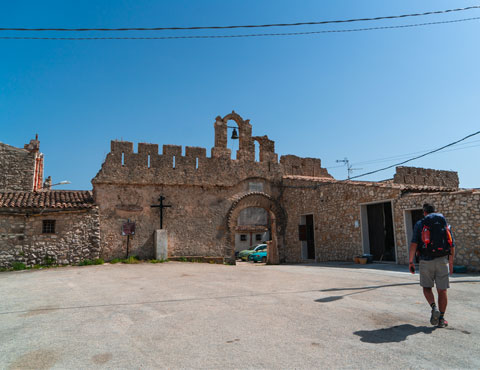