With a stage of good length but smooth and without significant differences in height, we skirt first the Lago di Barrea, then we reach the Camosciara and finally we arrive in the magical village of Pescasseroli.

The signs are not always present, it is good to keep an eye on the GPS track.

Several kilometers of route are on asphalt.

We leave Barrea and take the road that runs along the entire southern shore of the lake of the same name. Once at Camping Wolf, we take the path that cuts the bends of the asphalted road and we go up quickly (approximately 100 m height difference) until we cross the Area Faunistica del Lupo and shortly after, reach Civitella Alfedena. Leaving the small town, we take the slightly uphill path (about 100 m height difference) towards Colle Jajacque; from Colle Piano, we admire a splendid view of the northern walls of the Camosciara group, reminiscent of the Julian Prealps.

Shortly after, we come to an asphalted road and take it to the right, passing by a picnic area. Once on the state road, we turn left and stay on the road for several km along the Sangro River. By the Centro Visita Museo della Foresta, we take the dirt road on the left, which soon becomes a path; we follow the track, until we get out on the road that bypasses the town of Opi from below.

Another couple of km on the road, then we take the path on the right that goes up smoothly (approximately 100 m height difference) towards the Valle dell'Orso (the track is not always easy to spot and we must look hard to see the trail signs); from the Colli Bassi locality, we find the asphalted road and follow it with an easy descent to the beautiful village of Pescasseroli.

An illustrious native of Pescasseroli is Benedetto Croce, one of the greatest intellectuals of the Italian 20th century: philosopher, historian, politician, he was an exponent of the Italian liberalism.

The love for freedom ("which is the only one that makes a man's heart beat, in his capacity as a man") led him to strongly reject the Fascism; he was one of the promoters of the Manifesto of the Anti-Fascist Intellectuals, in opposition to the one written by Giovanni Gentile. An openly dissident, he was tolerated by the regime for his international fame.

The philosopher, who was born on February 25, 1866, was one of the promoters of the birth of the Abruzzo, Lazio and Molise National Park: even though he lived most of his life in Naples, he left a heartfelt love declaration for his homeland from the balcony of Palazzo Sipari in Pescasseroli.

Pescasseroli is the registered office of the Parco Nazionale d'Abruzzo, Lazio e Molise, the second national park in Italy, established in 1922 a few months after the establishment of the Gran Paradiso Park.

It was Erminio Nicola Vincenzo Sipari who fought for the introduction of the National Park (on the model of the Yellowstone Park). His approach to the conservation of natural beauty was innovative and based on sustainability through two actions: environmental protection and tourism development. Erminio Sipari developed a system that today we could define futuristic, forerunner of issues that are urgent today; his political and scientific work has allowed the maintenance of this natural area which is considered the lung of Europe.

Franco Tassi was one of the presidents that, since the 1970s, has strongly contributed to the development of the park, expanding it and establishing integral reserve areas. Furthermore, with the Operation San Francesco and the Arma Bianca project (for the enhancement of the Abruzzese sheepdog), policies have been implemented aimed at coexistence with the wolf, another of the protagonists of the park's fauna, in addition to the Marsican brown bear and the chamois of Abruzzo.

Val Fondillo and Camosciara were the first two areas of the Abruzzo National Park, Lazio and Molise.

The Camosciara, so called due to the conspicuous presence of the Abruzzo chamois, is today an integral natural reserve to which it is not possible to access; Val Fondillo, which houses some necropolis dating back to the 7th century BC, has been recognized as a World Heritage Site by UNESCO together with the centuries-old beech woods that cover two thirds of the Park.

The Pescasseroli-Candela trattuto starts from Pescasseroli, with a length of 211 km - the third longest in Southern Italy.

The tratturi are huge "green highways" that shepherds used for the sheep’s transhumance towards the Tavoliere delle Puglie, where, upon payment of a tax, a winter pasture was granted. The journey to Puglia lasted two/three weeks and along the way there was a large number of services such as drinking troughs, inns, rest areas and places of trade. The path itself, with its constant width of 111 meters, guaranteed the sheep to be able to feed while carrying out the transhumance.

The system, introduced by Frederick II and later expanded by the Aragonese to develop the wool trade, was one of the most important revenues of the Kingdom of Naples. The unification of Italy marked the end of this centuries-old tradition already partially abolished with the Napoleonic occupation.

In the nearby village of Civitella-Alfedena there is the Area Faunistica del Lupo, where you can easily see a pack of a dozen Apennine wolves.

The wolf is one of the main protagonists of the current Parco Nazionale d'Abruzzo, Lazio e Molise, reintroduced thanks to the Operation San Francesco, commissioned by the former director Tassi. The operation, in addition to safeguarding the animal, took care to sensitize tourists and inhabitants, to dispel the myth of the bad wolf.

The Museo naturalistico del Centro Visite del Parco Nazionale d'Abruzzo, Lazio e Molise is a unique tool for understanding the richness of the Park. Thanks to the finds of the archaeological areas of Scontrone and Val Fondillo, you can take a leap into the prehistoric past of this area. In the museum garden, there is a botanical garden and some animals that are no longer able to live in the wild, such as bears, deer, otters and wolves.

Upstream of Pescasseroli stood the Mancino Castle, built in the 11th century by the Borrello Lords as a defense from the barbarian invasions.

Following various earthquakes and the socio-economic degradation of the 14th century, the castle was gradually abandoned and its stones were used until the mid-19th century to build the urban center of Pescasseroli (according to the testimony of Benedetto Croce); today only the ruins of a walls and towers remain.

One of the symbols of Pescasseroli is Palazzo Sipari, home of the most important family in the area.

The philosopher Benedetto Croce was born on the second floor of the building and the residence was visited by the most important men of the Italian 19th/20th century: from the royal family of Savoy to intellectuals, politicians and artists. The palace includes the stables, a hanging garden and the Church of the Madonna Addolorata. From the balcony of the building was exhibited what would have been the last bear killed before the establishment of the Alto Sangro Reserve, which took place in 1913.

It was in the rooms of this building that the idea of the Abruzzo, Lazio and Molise National Park was born. Today the Sipari Palace is a historic house museum.

The ancient village of Opi, which develops along a ridge on the slopes of Monte Marsicano, is definitely worth a visit.

The name, of Roman origin, probably referred to the goddess of abundance Ope, the Venusa goddess adored by the Sabines (the Italic population of the Samnites,  who inhabited this area, was in fact of Sabine origins). There were numerous inscriptions and archaeological finds, including the Italic temple of the 2nd century BC at Casali d'Opi and the necropolis, with more than 153 tombs, at the entrance to Val Fondillo.

The patata maritata is the typical dish of Pescasseroli, made with potatoes (from Fucino), stale bread, pecorino cheese and parsley.

In September takes place the Vino Transumante event, during which along the town’s street it is possible to taste the Abruzzo wines accompanied by local folklore events that recall the ancient rite of transhumance.

In Pescasseroli there are numerous accommodation facilities.

Departure point reachable by bus from the city of Avezzano with a change in Pescasseroli. 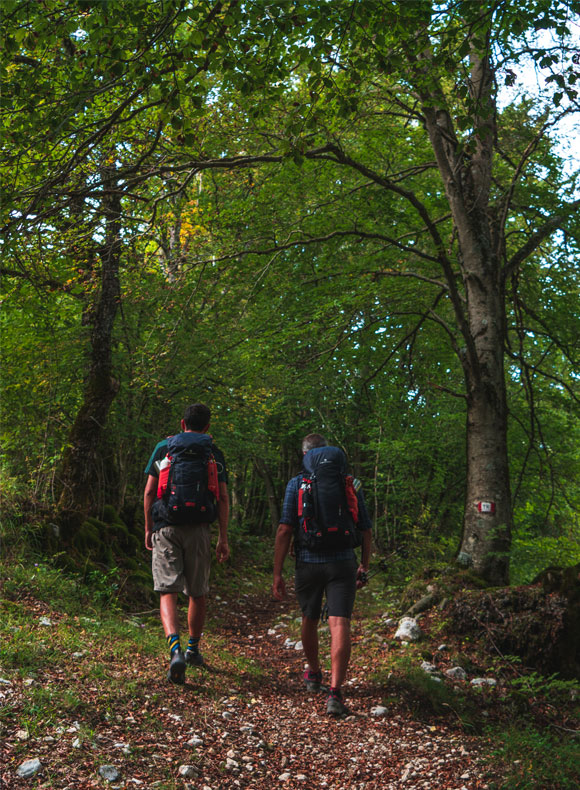 “We conclude the day at the Bar dell'Orso, together with various local characters who, by dint of Fernet, hold the stage until late” 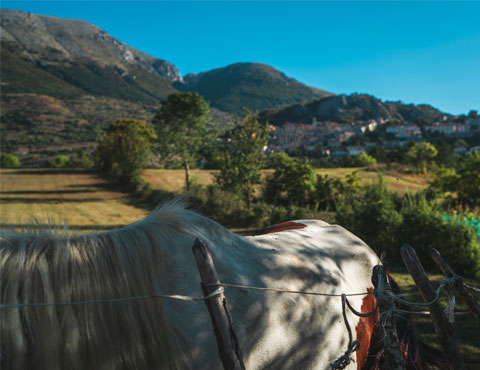