A medium-length stage in the Murge, all flat and a bit monotonous.

A walk in the olive trees and the oak forest.

We leave Cassano delle Murge and enter the cart track of the Apulian Aqueduct, skirting an oak forest. We continue with a flat straight line, passing some asphalted roads until we enter the Bosco Tateo, which we cross to the east.

Once out of the woods, we pass (with caution) the provincial road and start again on the Aqueduct. We continue for about a dozen km in the same direction, through fields and olive groves, until we pass the railway; after a couple of km we are in Gioia del Colle.

It is believed that Gioia del Colle was established after the abandonment of the settlement of Monte Sannace (located just outside the town, of which an archaeological area of immense historical, naturalistic and landscape value remains). From the mountain, you can enjoy a spectacular panorama that goes from the Ionian to the Adriatic Sea.

The town is located halfway between Bari and Taranto and for this reason, it has been a fundamental hub since the 11th century BC. Its territory is rich in archaeological finds, which testify to the presence of man since ancient times: the Peucezi occupied the central part of Puglia between the 8th and the 2nd century BC, bordering with the Daunians to the north and the Messapi to the south. If the Dauni stood out for the agriculture and the Messapi for their warrior skills, the Peucezi distinguished themselves for the high cultural level found in the artifacts found.

The most accredited thesis regarding the origin of the name of Gioia del Colle is the one tracing it back to the Byzantine period; in fact, the name derives from Joha, a contraction of the surname Joannakis - a family that lived there during the Middle Ages.

Others argue that the name can be traced back to the loss (and therefore to the happy discovery) of numerous jewels belonging to a noblewoman passing through these areas; on the herald of the town, there are jewels inside a stem glass.

The Federitian castle of Gioia del Colle was the setting of one of the most famous and controversial love stories of the medieval era, the one between Frederick II and Bianca Lancia.

Many argue that the emperor met Bianca Lancia during his marriage to Jolanda di Brienne, arranged to mend relations with the papacy but never approved by the Swabian ruler. Unable to get married, Frederick and Bianca Lancia secretly loved each other and from this union was born Prince Manfredi, future successor to the leadership of the Kingdom of Sicily.

The story of the castle of Gioia del Colle is linked to the birth of Manfredi: it is said that Frederick II, blinded by jealousy and believing his beloved had become pregnant with a page, locked up Bianca Lancia in the prison and liberated her only after the birth of little Manfredi. Legend has it that Bianca Lancia presented herself to Frederick with her breasts cut off (these wounds led to her death) and that inside the prison there are two visible protrusions, symbols of the lady's breasts.

In reality, what comes to light from the documents leads us to think that Frederick loved her deeply (there are numerous drawings that portray them lovingly embraced) and that the phantom act of jealousy could be the result of posthumous legends that wanted to discredit the legitimacy of the lineage of Manfredi. In fact, Frederick married Bianca Lancia on his deathbed exactly to legitimize the offspring: he saw in Manfredi, who resembled him very much, his successor.

The "Antonio Ramirez" airport in Gioia del Colle is an important NATO airbase.

In 1916, during the First World War, one of the first flight schools of the Kingdom of Italy was established here. The airport was later occupied by the Americans during the Second World War and then returned at the end of the conflict. In the 1950s, at the peak of the Cold War, the base was transformed into a missile base equipped with nuclear weapons.

The Federitian castle of Gioia del Colle (built in 1230 on his return from the crusade), in visual contact with Castel del Monte, was part of the system that Frederick II built to control his beloved Puglia: a real communication network.

The castle, in addition to being the residence of the beloved Bianca Lancia, was the residence that Frederick II used to rest during hunting trips. Built on a center of Byzantine origin dating back to the 9th century, after the defeat of Manfredi in Benevento, it passed under the control of the Angevins.

The throne room, huge and still well preserved, where the emperor received his guests, is spectacular; the Torre Imperatrice, where Bianca Lancia resided, was enriched with tools for the care of the body, a legacy of the Arab world (despised by Catholics instead): there was even a ... toilet!

Over the centuries the castle suffered several looting but has maintained the original structure.

Inside the castle, there is the Museo Archeologico Nazionale di Gioia del Colle, which hosts the finds found in the Archaeological Park of Monte Sannace. The excavations of Monte Sannace began after World War II and brought to light numerous Peucezi, Hellenic and Roman finds, including an enviable collection of amphorae.

At Monte Sannace you can still admire the remains of the walls that formed the defensive structure, those of some houses and of frescoed tombs. A very ancient settlement, it was located in an easily defensible position and with a lot of available lands for cultivation.

Inside the museum, you can admire numerous finds that tell of the daily life in the ancient settlement, that experienced its moment of splendor during the 3rd century, after the clashes with the city of Taranto, when there was a further process of Hellenization and the birth of new aristocratic groups. It is believed that the city was destroyed by the Romans following the (indirect) support that the Greek population gave to the Carthaginians during the invasion of Hannibal.

Just outside of town, there is the Cassano Distillery, an example of industrial archeology. Following the protectionist measures between Italy and France, in Puglia there was an overabundance of wine production, compared to what was the demand: it was for this reason that, in 1890, Paolo Cassano, like other landowners in the area, began the production of spirits. That of Cassano was an excellent production (in particular for cognac) and one of the most innovative examples of industrial activity of the time.

The product of excellence is the Gioia del Colle mozzarella.

The Protected Designation of Origin, obtained in December 2020, marks an important step for a product that is the symbol of the territory, already described after World War II by the Istituto Luce. In the 60s and 70s, many mozzarellas left from Gioia del Colle to be sold in the shops of Northern Italy.

The famous stretched curd cheese from Gioia del Colle can be made, according to the specification, in three different shapes: knot, braid or round. The product is made with cow's milk from the cows that graze in the Murgese countryside; the milk is processed raw in order to maintain the precious aromas of this land.

The Primitivo is the vine par excellence of the central territory of Puglia.

Between Gioia del Colle and Acquaviva delle Fonti stands the Polvanera winery, established after the initiative of Filippo Cassano - who, after studying enology, wanted to tell the story of his family through his wines, enhance its territory and show the potential of the Primitivo vine.

The cellar dug into the limestone, for about 8 meters, is the place that symbolizes all of this. The name Polvanera (black dust) derives from the farm adjacent to the cellar, used for the production of coal. The most significant wine is Polvanera 17 (from the provisional label indicating the alcohol content): after receiving the three Suns from the Veronelli guide, it has become an iconic name.

In Gioia del Colle there are numerous accommodation facilities. 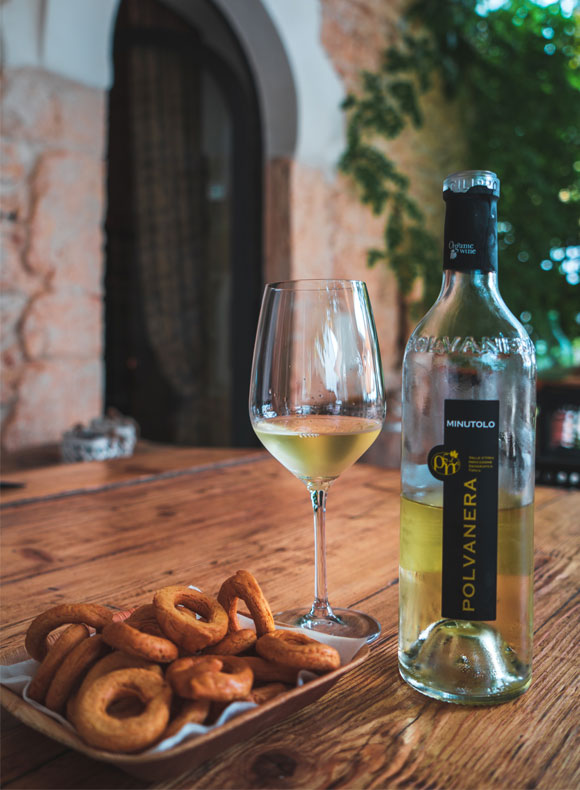 “What a tasting, the one in the wonderful Polvanera cellar...” 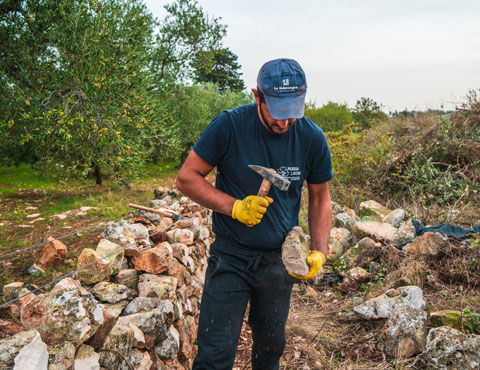