A stage of good length but practically without height differences, marked by the sight of the first trulli we encounter.

The highlights of the day are the Benedictine abbey of Madonna della Scala and the arrival in the beautiful village of Noci.

A quite sunny stage, to be avoided in the hottest months.

The only water point is at the Madonna della Scala abbey.

We leave Gioia del Colle passing by the town center; the entrance to the Apulian Aqueduct path is slightly covered by plants and is not easy to find. Shortly after, we continue on the road to avoid a stretch of the aqueduct; we return to the route and continue for several km on a causeway and panoramic dirt road, sometimes quite infested with plants.

Afterward, we leave the aqueduct and turn right onto the Ippovia dei Trulli and della Murgia, on a combination of asphalt and dirt road, circumventing Lake Milecchia. After a light climb (the only one of the stage), the route leads us to the Benedictine abbey of Madonna della Scala.

The village of Noci stands on a promontory in the southern part of the Murge, also called the Murge dei Trulli: the countryside is characterized by the trulli, the famous rural buildings that have become the symbol of all of Puglia.

The trullo is a construction used since ancient times as a shelter for those who worked the land (cozzaro) and as a shed for tools. Similar constructions can be found throughout the Mediterranean and seem to be an evolution of the prehistoric tombs called tholos ("dome" in ancient Greek); however, the oldest trulli in Puglia date back only to the 17th century.

With their unmistakable conical shape, they are built using dry stone. The slabs that make up the dome are called chiancarelle and are arranged in such a way that will make the cone self-supporting. The limestone, in addition to guaranteeing the impermeability of the structure, guarantees thermal insulation.

The history of the town of Noci during the Angevin period (14th-15th century) differs slightly from that of the neighboring centers, because the presence of the princedom of Taranto, partially independent from the kingdom of Naples, made this area a buffer zone.

Until the arrival of the Aragonese, Noci was under the control of the Knights Hospitallers, also called Gerosolimitani - a chivalrous religious order founded during the Crusades.

The town of Noci is crossed by the Cammino di Don Tonino, a path dedicated to the priest and bishop Tonino Bello (1935-1993), very much loved by the local population for his dedication to the weakest and for having introduced in the parish themes linked to the social debate, favoring confrontation with a critical and free spirit.

The main religious building in Noci is the church Matrice della Natività, dating back to the 16th century. Inside the church, there are numerous works of artistic value, such as the 14th-century polychrome baptismal font, a Baroque crucifix, and the extraordinary polyptych.

The church bell tower was built on a medieval tower of Norman origin.

Just outside of Noci, you can admire the monumental complex of Barsento, an important example of Roman rock architecture.

Of uncertain origin, legend has it that the first settlement was built by Saint Gregory the Great in 591 AD; the architectural style, however, suggests that the settlement dates back to the Lombard period (VIII-IX century). The church, standing on a promontory above the large sinkhole called the canale del Pirro, takes its name from the community of the Barsentani clerics who established a monastic community here in the Middle Ages.

In the direction of Gioia del Colle stands the Benedictine abbey of the Madonna della Scala.

The monastery, built in 1932, incorporates an ancient church (dating back to the first decades of the year 1000) of which remains the 13th-century portal with high-reliefs and sculptures. Over the years to the monastic complex, now an abbey, have been added the large church with three naves and the bell tower.

The community of Benedictine monks, living according to the ora et labora rule, created a printing house inside the monastery. In addition to the writing and publication of the magazine La Scala, aimed at conveying a model of spiritual life, the monks are involved in the restoration of parchments, incunabula and ancient books - in particular, the volumes damaged during the flood of Florence. Finally, the building hosts a large library (with more than 60,000 volumes) and is an important center of medieval and Gregorian musicology.

A typical salami of the area is the zampina, a sausage made with veal, enriched with pecorino cheese and pepper.

Horsemeat-based dishes are also typical, for example donkey stew or horse meat with which numerous recipes are prepared such as meat sauce, thin marinated slices or, on Sundays, brasciole.

The gnostre are the typical dead-end streets of Noci: located between two buildings, they are somewhat public and somewhat private courtyards, that open onto the main road. In the period preceding Christmas, the typical alleys of Noci are filled with the scent of the Pettole nelle Gnostre festival.

The pettole, traditional Apulian fried pasta, are sold in the gnostre : they can be found both in a sweet version, with fig syrup, honey or sugar, or in the more classic savory version, with tomatoes and olives or with cod. 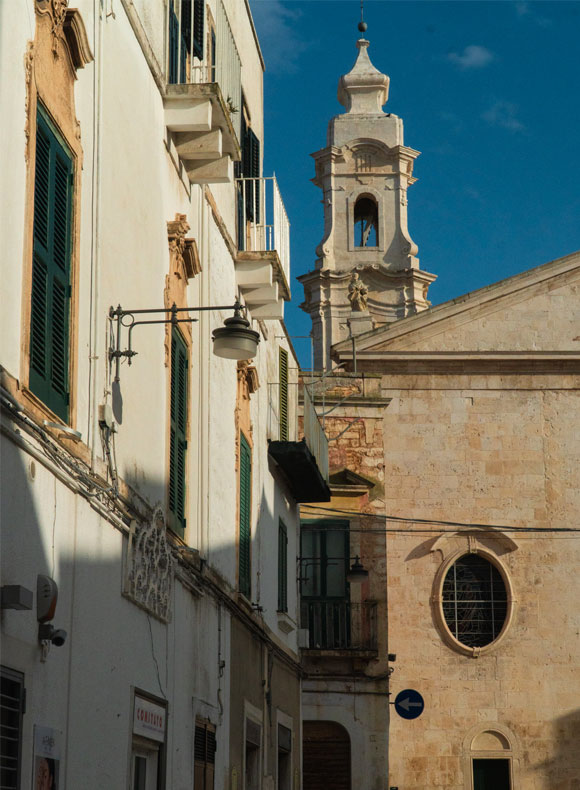 “Noci: another enchanting village, its orderly streets, the superb churches” 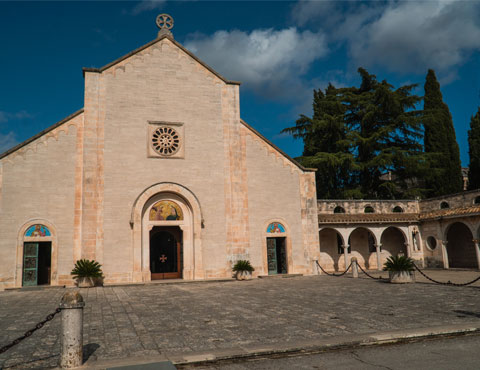