A medium-length stage, very easy, which alternates pleasant moments among the olive groves and the trulli with long stretches on asphalt.

We enter the alto Salento: the village of Ostuni is worth every step!

The stage represents a variant of the Sentiero Italia (which ends in Grottaglie), chosen to extend the Apulian path to the beautiful Salento coast.

Much of the route is on paved roads, albeit with little traffic: be careful.

Absent signs for most of the way: it is good to monitor the GPS track (especially among the olive groves, where there are several tracks).

After passing the charming historic center of Cisternino, we leave the town and continue north-east along an asphalted road. After about 1 km, at a crossroads, we see the Santuario della Madonna d'Ibernia. We continue on asphalt for another km in the direction of Monte Fergole; we continue on a red dirt road, among the olive groves, and we look out on the northern side, from which we see the Adriatic Sea.

A steep but short descent on a narrow path (about 50 m drop, the only slightly technical stretch of the route) leads us to the wide path below, which we take to the right, along the hillside. We cover it easily for about 1 km, then turn right on a short climb and reach a closed gate: we turn left and follow the dry stone wall. We continue on the easy path, with several turns (good to use the GPS), actually following the edge.

We continue on asphalt and proceed for many (but fast) km on the road, still in a pleasant environment, until we enter the provincial road and arrive shortly after in the magical heart of Ostuni, with its precious streets and the enchanting panorama.

The village of Ostuni is renowned for its extraordinary beauty.

The houses climb tightly up to the top of the promontory, characterized by the bright white color of their walls. For this reason, it is also called the white city; the houses painted with white lime had the function of disinfecting the village and making it as aseptic as possible after the waves of plague that hit the village in the 17th century.

The bright white of the houses, typical of the villages of the north of Salento, also manages to illuminate the narrow alleys - similar to those of an Arab Qasba (fortified citadel), not reached by the sun.

The first settlement in the Ostuni area is traced back to the Messapi, one of the three populations from Illyria that formed the Japigia, the Roman Apulia.

In 1148, Goffredo III, Count of Ruggero II of Sicily, built the castle on top of the hill where today the village of Ostuni stands - nowadays the castle remains the turret and the Zurlo Garden. Frederick II brought considerable development also in this area, however it was with the Angevins that Ostuni prospered, opened up to trade and saw its first fortifications. The Aragonese continued with the Angevin policies by strengthening the defensive structure of the city (with the installation of four towers) and by strengthening trade: in this regard, the local Jewish community stood out, especially in the commerce of textile products.

Under the Spanish government, Ostuni experienced its period of maximum splendor: the defensive structure of the medieval village forced the rapidly increasing population to make the most of the spaces inside the walls, thus creating the spectacular maze of streets and alleys.

The pride of the historic center of Ostuni is the Basilica Minore, built in the 15th century in the upper part of the town.

The facade is a wonderful example of the late Gothic architecture, with two half-moon arches that lean on the central tympanum where the 24-spoke rose window shines, a work of extraordinary workmanship which, in size, is the second-largest rose window in Europe. The interior with a Latin cross shape, rebuilt in the 18th century, is composed of 3 naves enriched by baroque-style chapels and frescoed ceilings. On August 26, in front of the basilica, the knights await the release of the statue of Sant'Oronzo to begin the Cavalcade of Sant'Oronzo, the most important festival in the village.

Next to the Basilica is the Archivio Capitolare, which possesses a historical and artistic heritage of considerable interest: from Messapian artifacts (VII-II century BC) to the silver ostensory (the sacred container of the hosts) of the 17th century. Particularly relevant are the numerous medieval parchments (over two hundred) and the peculiar wax Christ with an opening on the abdomen that allows you to see the bowels, dating back to the 17th century.

Not far from the basilica, in the former Carmelite convent of Monacelle, there is the Museo di Civiltà Preclassiche della Murgia, where it is possible to admire the remains of the woman of Ostuni, a pregnant woman who lived 28,000 years ago.

The remains of the woman, who wore a particular headdress made up of small shells, were found in 1991 by Donato Coppola, inside the cave of Santa Maria di Agnano; the discovery was of considerable importance both for the state of conservation of the human remains and for the funerary structure that allowed archaeologists to shed light on many aspects of Paleolithic man. In addition to the woman of Ostuni, there have been numerous findings of human, animal and ceramic remains that make the museum a place of great interest.

About 2 km from the village of Ostuni you can visit the Parco Archeologico e Naturalistico di Santa Maria d'Agnano, the area where the remains of the woman of Ostuni were found.

The cave of the discovery, used in the Paleolithic for propitiatory and ritual purposes, was used until the Middle Ages. Inside the park, which can be visited in the summer, there is also the Santuario di San Biagio, built on the rock and enriched by the remains of Byzantine frescoes.

In nearby Montalbano di Fasano, along the ancient Via Traiana, there is the Dolmen of Montalbano, a megalithic monument that was part of a sacred place to the Neolithic populations who inhabited the area.

The dolmen is within the Parco Naturale Regionale Dune Costiere from Torre Canne to Torre San Leonardo, which aims to preserve the suggestive sandy dunes that form the wet area of the Morelli River; the stretches of brackish water host an organic aquaculture plant, where the cultivation of the Regina tomato stands out.

For more info on the Park, see the following LINK.

Since the Hellenic period, the Ostuni area was excellent for the production of wines.

The Ostuni DOP wines are produced in the municipalities of Ostuni, San Vito Normanno and Carovigno: a white wine made up of the Impigno and Francavilla vines, and a red wine, the Ottavianello, which is 85% composed of the homonymous vine.

Slow Food Presidium since 2011, it is called queen for the crown on the stalk. Cultivated on sandy soil, especially along the lame (seasonal streams), it is characterized by a thick skin, caused by its proximity to the sea. This feature allows it to keep fresh until the following year.

The typical dish of Ostuni is the 'ncapriata, consisting of a puree of beans and sauteed chicory.

The bitterness of the chicory of southern Murgia goes perfectly with the sweetness of the fava bean purée. Some argue that the name comes from the Greek word kapyridia, which indicated a wheat polenta similar to bean puree.

Starting point reachable by bus from the city of Brindisi

Starting point reachable by train from the city of Brindisi. 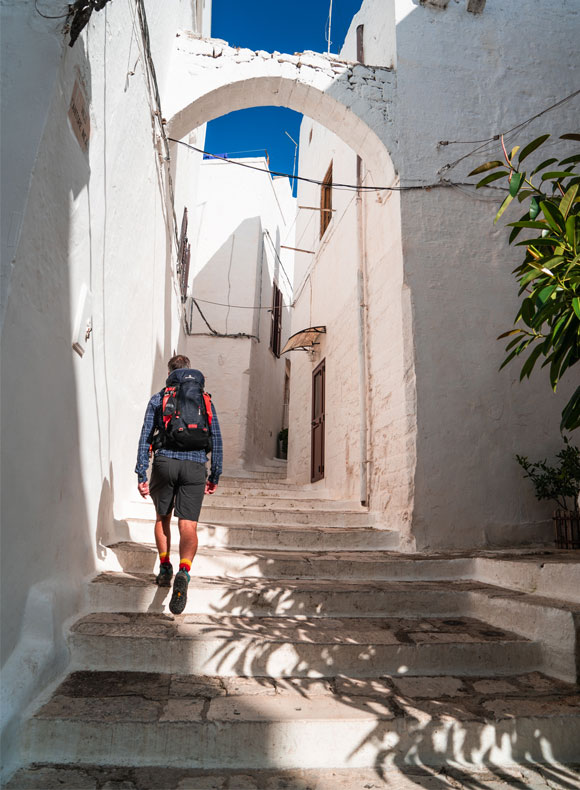 “Wandering through the streets of Ostuni, we feel like we are inside a party favor, the light bounces off the white walls of the magnificent center” 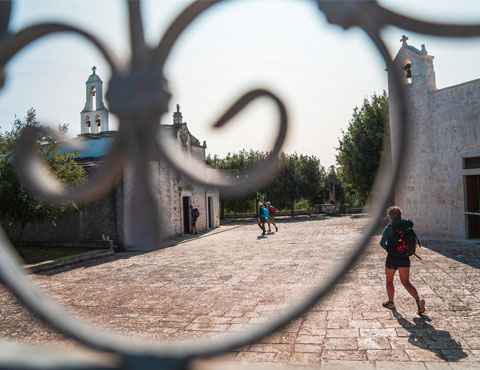