A medium-length transfer stage, all on flat asphalt. The gentle landscape, surrounded by centuries-old olive trees and dry stone walls, leads us to the wonderful beaches of Torre Guaceto, passing through the ancient village of Carovigno

The stage represents an extension of the Sentiero Italia (which ends in Grottaglie), planned in order to extend the Apulian path to the beautiful Salento coast.

The section is almost entirely on asphalt, albeit on roads with very little traffic.

The only water points are in Carovigno and Torre Guaceto.

We leave the magical center of Ostuni and, descending a little, we continue on a small paved road, passing by a church just outside town. We walk for several kilometers in the same direction (east-southeast) along the road that, winding between the dry stone walls, runs north of the state road until we reach Carovigno. The historic center of the town, with its beautiful castle, is worth a visit.

Leaving Carovigno, we turn to the northeast; after a short stretch on the state road, we take a small road to the left and, after 1 km, we turn right, along the Sentiero degli Ulivi Secolari (Path of the Centuries-old Olive trees - the name is deceiving: it is almost all on asphalt). After a short interlude on red terrain, we return to the road and continue for a long time, until we cross the provincial road; after the last 2 km surrounded by the olive trees, we overcome the railway through an underpass, then turn left and pass over the main road using the overpass, soon reaching the sea.

On the coast, there are numerous sandy coves interspersed with rushes and Mediterranean scrub areas, populated by a rich fauna, including the Kentish plover, small and rare bird. Thanks to its numerous fish and plant species, the marine area is a real treasure trove of biodiversity; in particular, there is a high presence of the posidonia, a plant very useful for the conservation of the marine environment.

The reserve was subject to protection starting from 1970 thanks to the interest of the Marquise Luisa Romanazzi Carducci, who entered the board of WWF Italy. In 1981, the area became part of the wetlands protected by the Ramsar Treaty and over the years, its sea has always been awarded the Blue Flag.

For more info on the reserve, see the following LINK.

Torre Guaceto is located within the municipality of Carovigno, a splendid village dominated by the Castle of Frasso, renowned for the tradition of the Nzegna: it is a religious festival that hands down the game of the flag for more than 1,000 years.

Connected to the cult of the Madonna SS. Maria del Belvedere, the Nzegna is celebrated in the days following Easter with the so-called battitura: two flag-wavers perform, accompanied by the melodies of the flutes and the rhythm of the drums. The rite of the multicolored flags that are waved is called battitura because through this rite the Carovigno population, gathered in Largo Macchiavelli, wants to "knock" at the heart of the Madonna. They venerate the image of the Madonna, painted in the crypt located on the Belvedere hill.

The symbol of the Torre Guaceto reserve is the Aragonese tower with a quadrangular base located in the southern part of the reserve. 16 meters wide on each side, the tower was equipped with a tank for the collection of rainwater, used as drinking water.

The tower was part of the system wanted by Charles V to defend the coasts from the Ottoman raids. The Torre Guaceto area was particularly sought after for the presence of fresh water and for the natural shelter provided by the lagoon. To improve the defensive system, the towers were positioned in such a way that they could communicate visually with each other.

Throughout Puglia, and in particular in the area between Brindisi and Bari, there are numerous masserie: fortified agricultural structures, belonging to the large landowners who managed the countryside with landowner methods.

They were small centers independent from the residential areas; the internal courtyard was a sort of square where the various professions met. These beautiful structures, abandoned with the depopulation of the countryside, are now experiencing a second youth, being transformed into wonderful farmhouses where, in addition to enjoying the peace of the countryside, you can rediscover the stories and traditions of the Apulian cuisine and culture.

Just outside Carovigno, you can cross the Sentiero degli Ulivi Secolari, located in the plain of the olive trees and also known as the Itinerario dei Giganti (Giants’ itinerary) because of the enormous millenary olive trees: there is one whose estimated age is ... three thousand years! The ancient olive trees take on the most bizarre and disparate shapes, making the landscape unique and evocative.

Several underground oil mills testify how olive growing has been rooted in this land since time immemorial.

The Riserva di Torre Guaceto includes in its interior also cultivated lands. The products of the area have been collected by the Slow Food community of Torre Guaceto in collaboration with the Riserva; the crops have all been converted to organic.

A product in particular, which was in danger of disappearing, is the fiaschetto tomato: it is a tomato with a thick skin (which helps a good preservation throughout the winter) and a sweet taste and it is an essential element of the cuisine of the high Salento.

In Carovigno, there are numerous bracerie - local street food: Giovanni Pomodoro's is an institution.

The skewers on the grill can be made of meat, but also fish, with octopus or a variety of fried fish. Among the many specialties, there are the gnummareddi: rolls made of lamb offal, parsley, fennel seeds and pecorino cheese - all enclosed in the same guts, a real delicacy.

There are no accommodation facilities in Torre Guaceto. Shortly before getting there, however, there are some.

Starting point reachable by bus from the city of Brindisi

Starting point reachable by train from the city of Brindisi. 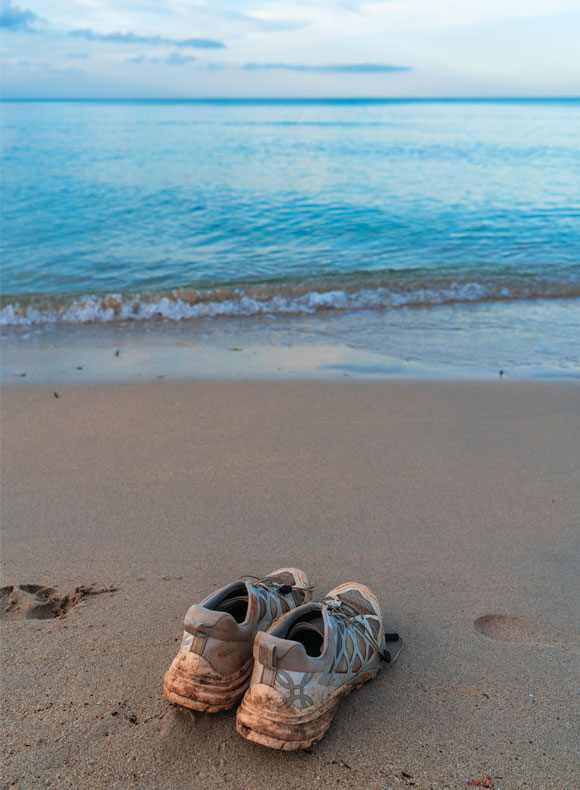 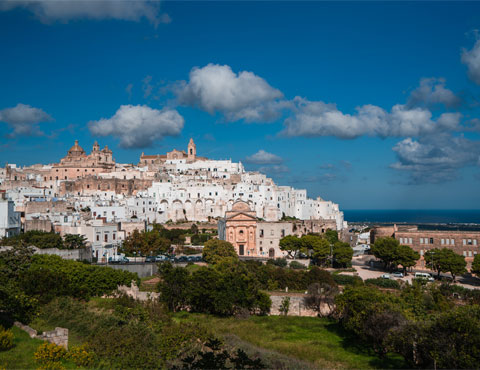