We continue in the Monti della Laga with a stage of significant length and height differences. After a monotonous first part, past the hamlet of Ceppo, we discover the scenery of Pizzo di Moscio, overlooking the Gran Sasso, and then explore a magical beech forest that leads to the small village of Padula.

The track is sometimes invaded by tall grass and it is necessary to look carefully for the trail signs (often missing signs): it is better to monitor the GPS track, especially at the beginning of the last descent, where the path is nearly nonexistent.

The only water points are at Ceppo and Fonte delle Trocche (along the uphill ridge of Pizzo di Moscio).

We leave San Martino on an asphalted road and pass the small church located near a bend; shortly after, we find the path that goes down to the valley floor, on the left. After crossing the bridge, we begin the long climb (approximately 600 m height difference) towards Monte la Morra; shortly after, we cross the village of Morrice and walk on a road with a constant slope. We take a wide path on the left that climbs into the dense forest. Afterward, we reach the ridge, among trees and thick ferns, continuing in ups and downs southward until, after a few kilometers, we reach the built-up area of Ceppo, with the homonymous mountain lodge (the arrosticini are highly recommended!).

We resume on a roadway and slowly start to climb (approximately 350 m height difference). The woods offer various glimpses of the Gran Sasso group until we leave the trees and ascend the eastern slope of Pizzo di Moscio (2,411 m). After a short cross path, very scenic, we start the long descent (approximately 900 m drop) towards Padula. Passed an old abandoned house in the middle of a large meadow (the track on the ground is almost absent), we enter a dense beech forest, truly picturesque due to the large trees and patches of moss; at times, we spot beautiful waterfalls.

After several kilometers (and some crossroads without signs: keep an eye on the GPS track), we reach an asphalted road, we take it to the left and immediately afterward, we enter the path on the right, which brings us within a few minutes to the village of Padula.

Valle Castellana is crossed by the Castellano river, also called green river for the emerald reflections of its clear waters. Nowadays, the valley separates the province of Ascoli Piceno from that of Teramo (and therefore Marche and Abruzzo), once it divided the Papal State from the Kingdom of Naples.

The Castellano river is mentioned in the Divine Comedy in the third canto of the Purgatory, when Dante meets Manfredi of Sicily, whose remains were taken out of the Papal States, beyond the Castellano. Even today, the valley is the border between Central and Southern Italy.

During the 16th century in the Teramo area raged the brigandage.

The most famous brigand of the time was undoubtedly Marco Sciarra: native of Rocca Santa Maria, with his gang, he kept Central and Southern Italy in check for more than twenty years. His strength lay above all in the support coming from the local population, tired of the abuses of the rulers: he was considered by many a sort of Robin Hood.

Both the Pope and the Doge tried in vain to capture him; he was the protagonist of daring adventures and was finally killed by one of his men (in exchange for papal pardon) in 1593, near Ascoli Piceno.

As early as the 12th century, there are testimonies of the town of Padula such as Rocca di Padula, which later became a municipality under the Napoleonic rule.

In the period of the French invasion in the Teramo territory, a large part of the population turned to a kind of banditry of Sanfedista inspiration (close to the church, against revolutionary ideas).

Padula is currently a hamlet of the municipality of Cortino.

The Santuario della Madonna dei Monti della Laga, located just outside the hamlet of Padula, is a church built in the 15th century and remodeled in the following centuries.

In Padula you can admire the ruins of the old mill and the fountains, such as Fonte del Serpente and Fonte degli Ammalati, sources of many myths and legends.

A classic digestif of the Abruzzo tradition is the one with gentian. Legend has it that local shepherds discovered the plant’s digestive properties by observing their animals’ behavior.

Located in Valle Castellana’s municipality, the Scuppoz company, a liqueur producer since 1982, uses the gentian as one of its main ingredients.

Ostello Comunale, in Padula. It is necessary to contact the municipality of Cortino to get the keys. Tel. +39 0861 64112

Starting point reachable by bus from the city of Ascoli Piceno. 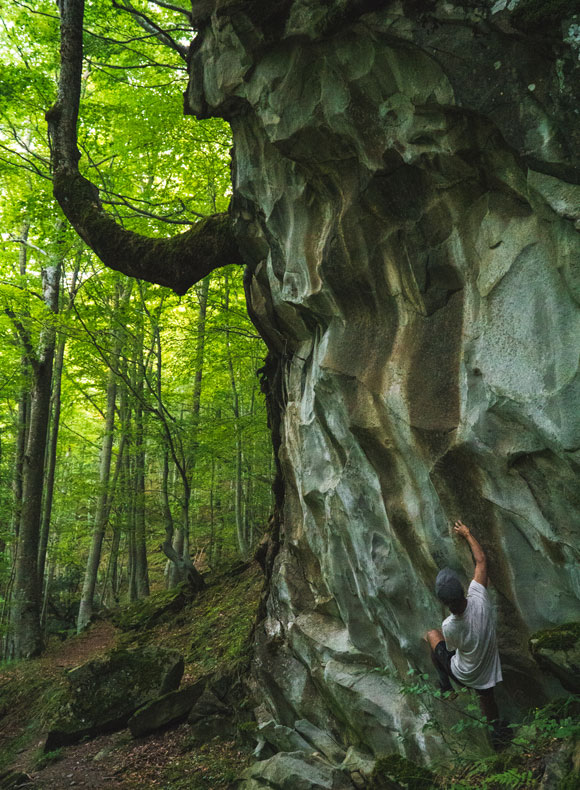 “The beech woods of the Laga offer magical glimpses of waterfalls, gorges, rocks sculpted by the water...” 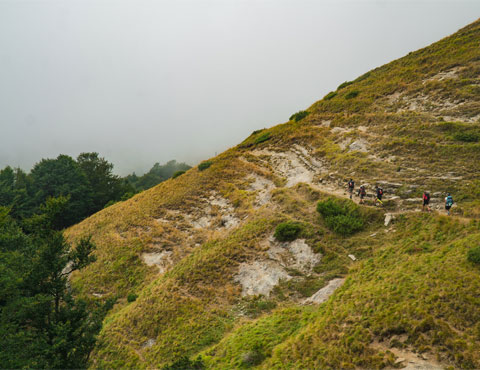