A medium-length and very easy stage: a pleasant walk.

We are in the heart of the Murge and for almost the entire stage we walk the carriage road above the Apulian aqueduct, between the jazzi (sheep fences), olive, and almond trees. We come across a large semi-abandoned pearl marble quarry.

No signs: it is better to monitor the GPS track (it is anyway easy to follow the route that goes along the aqueduct).

The final part of the stage is on the private property of the aqueduct; in some sections, there are open or easily bypassed gates.

We leave the Scoparella locality moving slightly uphill into the woods, along the Apulian Aqueduct. After skirting some abandoned farmhouses, we cross an asphalted road and enter the Aqueduct again.

We continue through the woods, until we pass in the middle of an old pearl marble quarry, out of which we continue on an asphalted road (always proceeding towards south-east); after a few km, we return to walk on the aqueduct, often surrounded by jazzi (the old dry sheep fences).

We proceed in the same direction for several kilometers, alternating uncultivated fields with stretches of scrub, always on flat, until we reach the town of Quasano.

Quasano is crossed by the Apulian Aqueduct, the most important engineering work in Puglia and perhaps of all Southern Italy.

Its water network is more than 20,000 km long and serves 4 million people; from the main artery, which goes from Caposele (in the province of Avellino) to Santa Maria di Leuca, there are 27 branches. The construction works began in 1906, thanks to the initiative of the politician Antonio Jatta, who wanted to put an end to the millennial regional problem of water scarcity (already mentioned by Horace!), caused, in particular, by the karst conformation that does not allow the presence of large rivers on the surface.

Over the years, many trunks were added to the central aqueduct: especially during the Fascism, it was added the section called Grande Sifone Leccese, which carries the water up to Santa Maria di Leuca, where the journey ends with a monumental waterfall (commissioned by Mussolini himself).

Its route branches off into the region like a large green highway, now accessible on foot and by bike.

The karst phenomenon that affects all of Puglia is particularly visible in the Alta Murgia. There are numerous formations that characterize the area: in addition to the numerous caves, there are limestone pavements - these are expanses of large stones that appear like a great road made by man, which is suddenly visible in the middle of the countryside. In reality, these rocky outcrops occur because of the dissolution holes that let the water and mud penetrate and bring out the bare rock.

Along the Alta Murgia countryside, it is easy to come across the trullo pagliaio or trullo caseddone, which differs from the normal trullo for its conical frustum shape, typically surmounted by a stone slab.

A small ladder goes around the cone and it is formed by protruding chiancarelle (limestone slabs used to build the roof), which was used by the farmer to climb and cram the straw from above.

In nearby Altamura, you can admire one of the most extraordinary archaeological finds of Italian prehistory: the Altamura Man.

This is the extraordinarily well-preserved skeleton of a Homo Neanderthalensis that, approximately 100/200 thousand years ago, fell in the Lamalunga cave and remained there until its discovery on 7 October 1993, made by some members of the CAI of Bari.

The skeleton, partially incorporated in the limestone formation, is now preserved inside the Museo Nazionale di Altamura.

In Quasano, a hamlet of Toritto, they grow the famous Toritto almond, renowned for its exceptional flavor - it is considered one of the best in the world and is part of the Slow Food presidia.

In Toritto developed various cultivar, that is varieties of plants, which take their name from ancient families of the town: Antonio Devito, Genco, Filippo Cea (the latter is the most famous variety). In addition to the aromatic notes and excellent flavor, the Toritto almond is characterized by remarkable nutritional characteristics.

The heritage of the whole Alta Murgia area is the Altamura bread, already praised by Horace. It received the DOP (Protected Designation of Origin) in 2005, the first bread-making product to receive this certification in Europe.

The Altamura bread is the symbol of the peasant culture of Alta Murgia. Its preparation was a ritual that united the village around the public oven: mainly kneaded by women at home, it was then cooked in public ovens. Before putting the loaves in the oven, the baker marked them with the owner's initials, so that they wouldn't get confused. At dawn, his cry could be heard, communicating that the baking was complete.

The bread was the indispensable sustenance of agro-pastoral life (lunch often consisted of a bread soup flavored with oil and salt) and it was, therefore, necessary that it last for a long time, given the periods that farmers and shepherds spent away from home: not surprisingly, the Altamura bread still stands out today for its durability.

The nearest town reachable by bus is Corato, starting from the town of Trani. 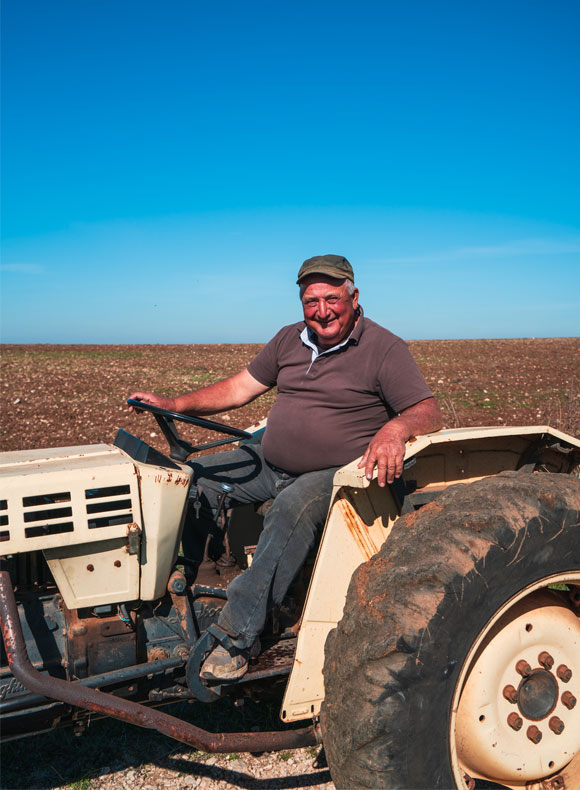 “Only the tractors, with their slow pace, disturb the horizon line” 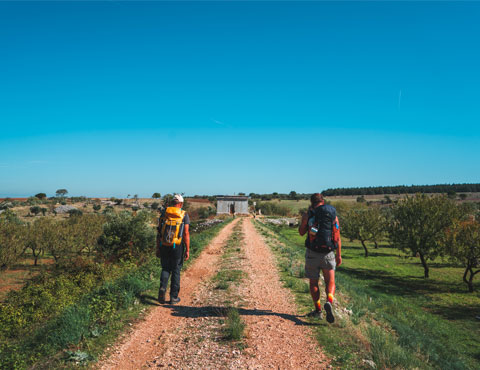