This stage was documented thanks to the contribution of Giacomo Noto.

The last stage in Sicily is short and almost all downhill until we reach the city of Trapani with its salt works.

No watering-places until Trapani.

Leaving the centre of Erice, we skirt the western outskirts of the town along a mule track, then pass the ancient Porta Trapani (Trapani Gate) and, after a short stretch on the road, return to the mule track to begin the descent (about 700 m drop) to Trapani, which winds downhill in hairpin bends overlooking the sea and the Egadi Islands on a comfortable surface and with a constant gradient.

We then pass through a residential area with small villas before entering the suburbs and continuing in a straight line until we reach the old town near the port. This is the end of our Sicilian section, one of the most beautiful of the Sentiero Italia.

Since ancient times, saltworks have developed outside the gates of the city of Trapani: a complex system of salt extraction from the sea, which, thanks to its vast expanses of water, is a valuable treasure trove for biodiversity (the lagoons and marshes used for salt extraction are particularly attractive to birds, as the various basins are home to a wide variety of insects and small animals), protected today by the Riserva Naturale Orientata Saline di Trapani e Paceco, preserved by WWF Italy - a place where productive activity and nature coexist, giving the area a very high landscape, architectural and ethno-anthropological value.

The reserve, established in 1995, covers an area of about 1,000 hectares. The salt pans of Trapani fell into disrepair after the First World War and followed the industrial sites of Cagliari and Santa Margherita in Puglia. However, thanks to the establishment of the reserve, the sea salt of Trapani has acquired a new value and has been recognised as a PGI product.

The landscape is enriched by the numerous windmills that were used to 'lift' the water: The water was pumped from basin to basin for salt cultivation - from larger to smaller basins where the salt concentration increases. Numerous plant species grow on the edges of the basins, including salt weed, salt marsh limonium, the so-called Malta mushroom and various species of Chenopodiaceae.

Among the fauna, the numerous flamingos stand out, owing their colour to Artemia salina, a small crustacean that can survive in the extremely salty conditions of the water - and of which the flamingos are greedy.

In ancient times, Trapani was called Drèpanon, after the characteristic crescent shape of the bay, whose long, narrow strip of land is clearly visible from the tip of Erice.

The first to inhabit the city were the Elymians. Over the centuries, Trapani was a true Mediterranean trading centre and lived as a free city, able to develop a flourishing shipyard; even during Roman rule, the city continued to develop.

A Roman ship from the time of the First Punic War was found on the coast of Trapani, recovered 150 metres off the coast near Marusa.

It was discovered by chance in August 1999 and only recovered in 2011. To date, it is the largest Roman shipwreck ever recovered in Italian waters. It is not the first ancient ship to be discovered at these depths: Where the Birgi River flows today, there must have been a canal port that was used to unload goods from Africa.

The ship is now in the Lilybaeum Archaeological Museum in Marsala.

The tradition of Trapani is coral processing, an ancient art that has been handed down to the present day but is in danger of extinction.

The numerous Jewish families from the Maghreb contributed to the development of this art. The coral fishermen sailed across the sea with the large “St Andrew’s cross”, to which the nets in which the coral had become entangled were tied. The discovery of the Tabarca coral reefs in the 16th century gave new impetus to the craft, and between the 17th and 18th centuries many coral artisans specialised in making jewellery.

Therapeutic and apotropaic virtues were attributed to the small jewellery. Among the many artists, the most famous is Matteo Bavera, who lived in the 17th century and created an extraordinary hanging lamp and a crucifix from a single piece of coral.

Off the cities of Trapani and Marsala lies the beautiful Egadi (Aegadian) Archipelago. The etymology comes from the Latin Aegates, meaning “islands of goats”.

The three main islands are Favignana, Marettimo and Levanzo. The Romans subjugated them after the First Punic War; in the following centuries they were conquered by the barbarians and Saracens before being fortified by the Normans in the year 1000. Today, surrounded by crystal clear waters, they are a destination for international tourism.

The ancient history of the Trapani salt flats is told in the Museo del Sale (Salt Museum), located in the neighbouring municipality of Paceco, in the district of Nubia.

The museum is located inside the Riserva Naturale Integrale Saline di Trapani e Paceco. On display are salt processing tools and numerous photographs that tell the story of a place that connects land and sea. The structure was created at the request of Alberto Culcasi (owner of the baglio with adjacent mill that houses the museum) to create a place that enhances the centuries-old product of this land.

Important for the city of Trapani is the Torre dell'orologio (Clock Tower), which still works perfectly.

Also called Porta Oscura (the oldest gate in the city), it was a watchtower built in the 13th century, where the astronomical clock designed by Giuseppe Mennella - one of the oldest in Europe - was installed in 1596.

The clock has two dials, one for the sun and one for the moon: on the first one you can follow the houses of the zodiac as well as the equinoxes and solstices; the second, which moves counterclockwise, marks the phases of the moon.

One of the most famous products of the province of Trapani is certainly Marsala, a fortified wine made famous by the English merchant John Woodhouse, who landed in the port of Marsala in 1773 and tasted the wine aged in oak barrels, which was very similar to the Spanish and Portuguese fortified wines (again, the method of ageing was to fill the barrels ad perpetuum to preserve the properties of the liquid).

The merchant bought numerous barrels and made Marsala known in England; given its success, he decided to start his own production and marketing. Marsala was certified very early on, because in the 1930s many merchants were selling poor quality Marsala in the face of the severe economic crisis in the city, so the government introduced ad hoc laws to protect the original. In 1969, it was the first Sicilian wine to receive the status DOC.

For the production of Marsala wine, Grillo, Catarratto, Inzolia and Damaschino grapes are allowed, for the classic golden amber type; there is also a ruby red version using some black grapes.

The wine is then made into a liqueur by enriching it with ethanol extracted from wine, a process introduced by John Woodhouse during transport to the mother country.

The sea salt of Trapani is a product protected by the PGI.

Its very high quality is related to the careful production method that gives the salt a particularly rich flavour - the processing is still artisanal and done by hand harvesting.

The salt is obtained through the evaporation of sea water extracted between the Riserva Naturale Orientata di Trapani e Paceco and the salt pans of Stagnone (in the municipality of Marsala).

Known as the polenta of the south, Frascatula is a product that goes back to the Roman dish puls farris - for which, of course, barley was used rather than corn.

During the siege by Angevin troops in 1282, Frascatula was the meal women gave to local fighters.

There are numerous variations throughout southern Italy: the version from Trapani consists of a mixture of cereals and pulses cooked in a vegetable broth.

Trapani is famous throughout Italy for Pesto Trapanese: a sauce traditionally used to flavour Busiate, a typical local pasta. It seems that this pesto also has Ligurian origins and was introduced by sailors on the Mediterranean.

It is characterised by the rich presence of garlic and differs from the Ligurian pesto by the presence of almonds and cherry tomatoes - in addition to the usual basil leaves. It is usually served with mollica atturrata, toasted bread crumbs.

A typical local product is Nubian red garlic, also known as Trapani garlic. It is protected by the Slow Food Praesidia and is characterised by its purple-red tunic and its above-average allicin content, which gives it a particularly intense flavour.

Much of the production takes place in the Riserva Naturale Integrale Saline di Trapani e Paceco.

The Cartucciaro melon is a typical fruit of the municipality of Paceco (it is also called, together with the Purceddu of Alcamo, “winter melon”, because of its high preservation capacity); an endangered product characterised by its sweetness and exquisite flavour - especially known for granita or ice cream.

The skin is yellow and smooth, the flesh white and juicy, the shape elongated. The Cartucciaru melon from Paceco is protected by the Slow Food Praesidium.

In Trapani, there are numerous accommodation facilities. 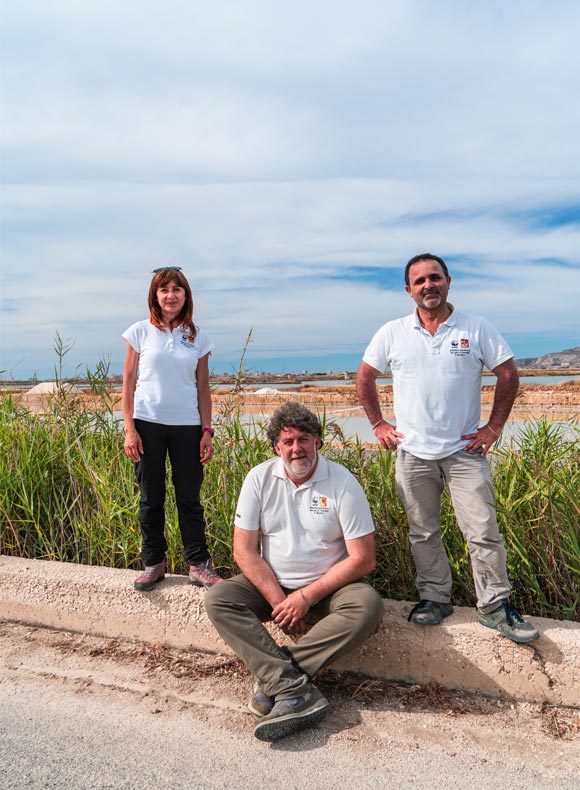 “From Trapani we head towards Marsala to visit the famous salt pans. Before the pink sands, our journey ends in Sicily, a land without equal” 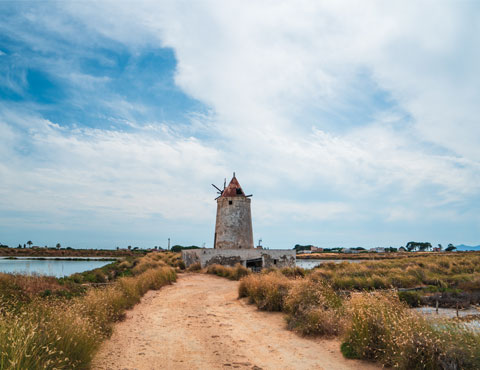