A stage of medium length and elevation gain, focusing entirely on the final section.

After a fluid but rather monotonous first part by the sea, we climb to the beautiful village of Erice - one of the most picturesque in all of Sicily.

In Bonagia we follow the small path along the coast and after a small cove with a jetty (a good place to swim) we reach the small square next to the old castle; from there we turn south on asphalt and head towards the slopes of Monte Erice. We leave the asphalt road and go through a gate (with a passage on the side) to start the long climb (about 700 m height difference). After an initial climb on a small path, we cross a gravel road and shortly afterwards pass a donkey path. The climb continues gently, then we return to the path near a hairpin bend on the asphalt road leading up to the village, gaining height in tight bends until we bypass and shortly cross the asphalt road; we lose height slightly and then climb again on a comfortable, wide path, just below the imposing towers of Erice Castle.

Finally, we reach the northern end of the small village, which is worth visiting: its streets and its views (from every side!) are a real treat for the eyes.

NONEErice is situated on the summit of Monte San Giuliano, where the city of Eryx once stood, built near the sanctuary dedicated to Venere Ericina.

Founded by the Elymians, Eryx was one of the most important cities of ancient Sicily and is mentioned by many Greek and Latin writers - Virgil in particular speaks of Eryx as the brother of Aeneas, the son of Aphrodite and Bute, and credits him with founding the city. Other legends, however, trace the city back to Elymus, the Trojan leader who gave birth to the Elymian people.

The first settlement dates back to the 2nd millennium BC. Although the city underwent a process of Hellenisation, it was never part of the colonies of Magna Graecia and its inhabitants, like those of Segesta, were considered barbarians. In the 5th century, it allied itself with the Carthaginians to fight against the city of Syracuse. After the First Punic War, it was placed under Roman rule and developed into an important and prosperous community.

A peculiarity of Erice is the fog that almost continuously envelops the mountain (a small cloud reminiscent of Fantozzi’s and also called a “hat”) and hides the village - a phenomenon called “l'abbraccio di Venere” (the embrace of Venus).

This weather condition, which often prevents the view of the panorama, creates impressive colour reflections at sunset and immerses the village in a surreal atmosphere.

D'Annunzio thus wrote of the town:

the blue Erice, alone between sea and sky

The town of Erice is home to the Centro di Cultura Scientifica Ettore Majorana (Ettore Majorana Centre for Scientific Culture), an organisation dedicated to the famous scientist who died mysteriously in 1938 (an event about which Leonardo Sciascia wrote a valuable work). It was founded in Geneva in 1963 by the physicist Antonino Zichichi, who is still its president.

During the Cold War, the centre was a place where knowledge overcame all political-ideological barriers and where Russian and American scientists met freely.

The Duomo dell'Assunta is the main church of Erice. It was built in the 14th century in the Gothic style as an extension of the chapel commissioned by King Frederick II, which in turn stood on the remains of a primitive Christian temple from the time of Emperor Constantine.

During the Spanish era, the cathedral was enriched by numerous chapels. The numerous maintenance works led to such structural problems that in 1846 Bishop Vincenzo Marolda ordered urgent restoration works, which lasted throughout the second half of the 19th century and turned out not to be a restoration but a real reconstruction: the church therefore presents itself today in neo-Gothic style.

The Polo Museale Antonio Cordici houses numerous artefacts of the people who lived in the area from prehistoric times to Roman times, through the Elymians, Punic and Greeks.

Among the numerous artefacts, the marble head of Aphrodite (from the 4th century BC) is the most valuable piece.

The centre was founded in 1876 to preserve artefacts, especially the famous ceramics from Erice, and is now housed in the former convent of the Third Order of Saint Francis. Inside, works of art from different centuries are interwoven with contemporary exhibitions.

Among the castles built on the mountain of Erice, the 12th century Norman castle “Castello Di Venere” stands out. It is located on the south-eastern slope of the mountain and was built over a temple of elymical origin. Some claim that the beautiful granite columns were part of the ancient temple of Venus.

The fortress was a royal place during the Aragonese period and was converted into a prison under the Bourbons. It is connected to the top by a drawbridge, now replaced by a staircase, and is enriched by the beautiful Torri del Balio (Balio towers) that dominate the view of the city: Left to the neglect of time, they owe their current state of preservation to Count Agostino Pepoli, who in 1872 decided to take care of their maintenance - he also planned the reconstruction of the third tower, which has a pentagonal shape.

An indispensable dessert of Erice is the Genovese Ericina, a short pastry filled with milk cream. The name refers to the hat-like shape of the cake, reminiscent of the hats worn by Genoese sailors.

The genovesi ericine must be eaten at Maria Grammatico's pastry shop - from which the great director Francis Ford Coppola (author of Apocalypse Now) also had his cakes sent. In her book Mandorle Amare (Bitter Almonds), Maria tells how she learned the secrets of pastry making when, as a young girl, she spied on the nuns in the convent who jealously guarded the recipes. Maria, an unflappable lady in her eighties, still stands in the front row, greeting the tourists who come to taste her specialities and proudly presenting her pastries, the result of her persistent work.

There are several accommodation options in Erice. 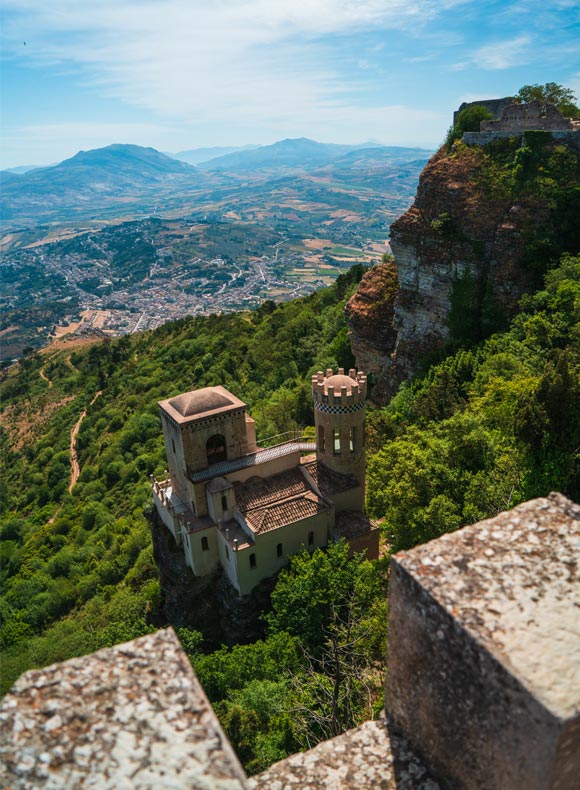 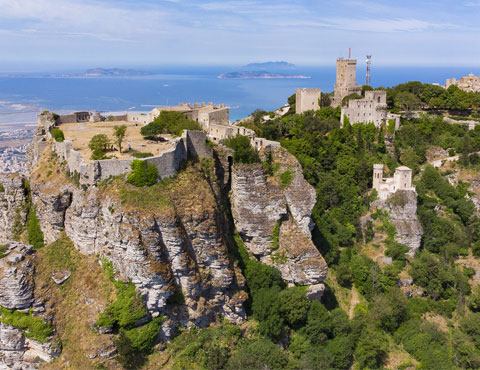