A short and easy stage, fairly anonymous and mostly on the road.

However, it is improved by the trulli and by the picturesque town of Alberobello, one of the most evocative of all Puglia.

This stage is almost entirely on the road - during certain times of the year it could be busy: be careful

A quite sunny stage, to be avoided in the hottest months.

We start from Noci passing through the streets of the historic center. We take the asphalted road to Alberobello; after a few km, we pass on a carriage road and then again on a path between the dry stone walls.

After a while we return to the paved road to Alberobello: it is a very simple path between figs and olive trees, although not very scenic. Approaching Alberobello, we begin to glimpse the first trulli; we arrive in the town (unfortunately, very crowded and touristy), truly unique in all of Italy, and we stop at the belvedere, in the historic center, with an aerial view of all the trulli.

The southern Murgia is full of trulli scattered around the countryside, conical-shaped rural buildings built with dry stones as a shelter for farmers; but why are there so many and so close together in Alberobello?

The reason behind such great beauty is perhaps less noble than expected: the trulli were built to avoid the law of the Pragmatica de Baronibus. In the 15th century, the Aragonese saw the power of the local baronies grow more and more; to try to stem the phenomenon, they declared that all new settlements had to be authorized by and subjected to the taxation of the Kingdom of Naples. However, there were many lands still uncultivated and for this reason, the counts of Acquaviva di Conversano forced numerous peasants from Noci to settle in the current Alberobello.

They granted them the right to work the land and forced them to build the typical rural shelters with the local stone, but without using cement - so that the dry stone constructions could be dismantled before the arrival of the inspectors of the Spanish viceroy of the Kingdom of Naples. That act of evasion allows today to admire one of the most beautiful villages in the world, recognized as a World Heritage Site by UNESCO.

Alberobello, which takes its name from the Latin Sylva Arboris Belli ("wood of the war tree"), remained under the feudal yoke of the Acquaviva d'Aragona family of Conversano until 1797, when King Ferdinand IV granted liberation from feudal servitude, as requested by some local citizens, elevating Alberobello from a small village to a royal city.

In the Albero della Croce district, there is the Masseria Gigante, connected to the story of the priest-brigand Don Francesco Gigante who wanted to build an agricultural school here.

The building, now abandoned, is sadly known for being one of the concentration camps used during the Fascist period, for the sorting of Jews and prisoners of war. With the unmistakable amaranth color of the plasters, after the war, it was used as a re-educational school for minors and subsequently fell into disuse and abandoned. The hope is to recover a building that tells a piece of our country's history - too often forgotten.

Among the many trulli of Alberobello stands out the Trullo Sovrano, the only two-storey one, which still today houses the original furnishings and objects inside.

Built in 1700 by the family of the priest Cataldo Perta, it was defined sovrano because of its size. Located behind the church of Santi Medici Cosma and Damiano, the trullo was the seat of the Confraternita del Santissimo Sacramento and for a period, the relics of the two saints were kept right inside it. Thanks to its large spaces, today the Trullo Sovrano is used as a location for shows and concerts.

In addition to the trulli, in Alberobello you can admire the Basilica Minore dei Santi Cosma e Damiano, located in the central piazza Curri. Made with local limestone, the church, built in the 18th century, has seen gradual changes and adjustments over the centuries.

With a Latin cross plan, the current building maintains the neoclassical style; spectacular is the entrance facade, characterized by the enormous staircase and the two spires - which contain the bell towers. In 1975, the bronze portal, depicting the beatitudes, was built. Inside the basilica there are some relics of the patron saints: the arm of Santa Cosma and the skull of San Damiano, brought to Alberobello in the 19th century.

The trullo church of Sant'Antonio da Padova was built in 1927 in the Monti district. The Greek cross shape is surmounted by the huge dome, 21 meters high; the facade, with three naves, is enriched by a central rose window.

The construction reproduces the construction technique of the trulli and represents an excellent point of intersection between ancient and modern architecture.

Typical of the Apulian tradition are the cartellate, a fried dessert made of rolled crumbly pastry and enriched with vincotto or honey and chopped walnuts. Traditionally it is eaten during Christmas and it is told to children that it symbolizes the sheets of baby Jesus.

Another typical product of Puglia is the lampascioni, small bulbs also called tassel hyacinth: the bitter taste is in contrast with the sweet scent they emanate.

Known already in ancient Greece, they are often found in oil and they are excellent also as a side dish to pork or lamb, or cooked in purgatorio: first boiled and then cooked together with bacon, pecorino and tomato.

In Alberobello there are numerous accommodation facilities. 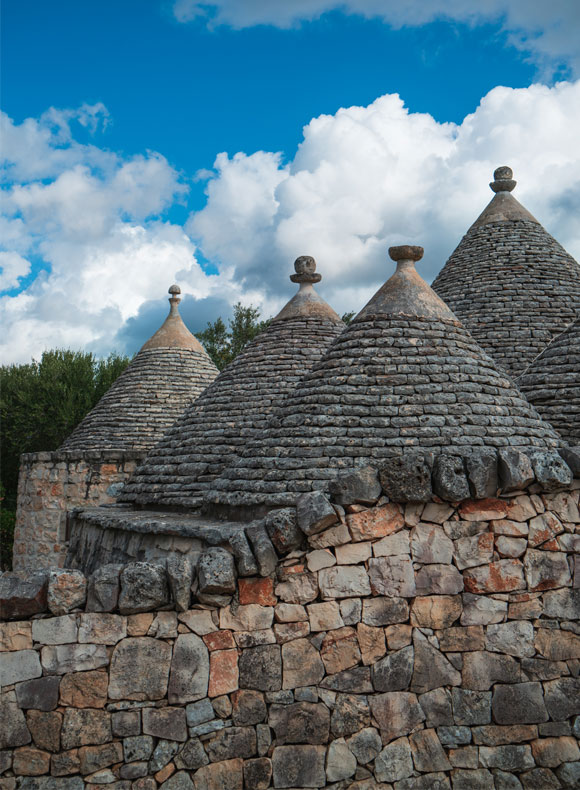 “Until a few years ago nobody wanted the Trulli, the owners were selling them off” 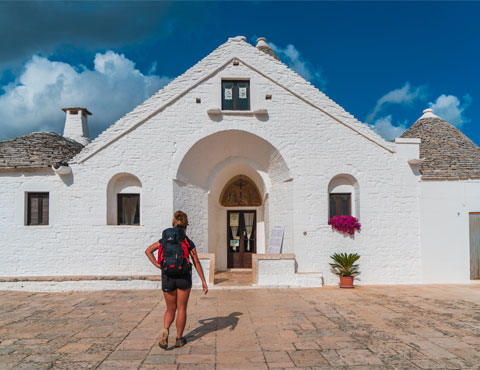