A short stage with constant ups and downs, very pleasant because it immerses you in the Sila National Park.

It starts at Lake Lorica and reaches Lago Ampollino. You will cross pine and beech forests, but also meadows and rural villages. Here and there you will even catch a glimpse of the wilderness.

Be careful when you leave Lorica: the road is busy in the high season.

On the way you will come across some cattle gates that you will have to open (and close again, always!).

Vertical signage is not always present (although the route is always clear).

After leaving the centre of Lorica with the lake behind us, we first walk on asphalt. Then we continue on a path and go around an embankment, which is characterised by being grassy and made of earth. We start to gain height slowly, going around the dam but not seeing it because we are immersed in the pine forest.

We climb gradually (about 200 m height difference), going round Monte Palombelli and then crossing it: the vegetation changes and we enter a beech wood. The path continues into the wood and we begin the descent (about 250 m drop), which leads continuously and without cracks to the Caporosa road.

We leave the beech forest to re-enter the pine forest, but in several places the panorama opens up. Then we cross a beautiful plateau (it looks like Canada!) where cattle often graze; there is also an abandoned mountain pasture where we can stop and refresh ourselves.

At the end of the descent, we follow a flat track that passes a stream and then return on asphalt for the last kilometres on the road to Caporosa; along the way we encounter many farmhouses.

Among the numerous peoples who inhabited Calabria were the Bruzi (from the Latin Bruttii).

They lived in the 4th century BC and belong to the Indo-European peoples who spread across the Italic peninsula and are now commonly referred to as “Italic people”. Their origin is not known; the only certainty is that they were linked to the other Italic people by their language, Oscan.

In literature, the Bruzi are described as a people of shepherds who were enslaved by the Lucanians, against whom they rebelled. The now free tribes formed a confederation and conquered the hill on which they founded the city of Cosentia as their capital. The Lucanians continued to refer to the Bruzi as rebels after they were defeated by an army led by a woman at the “Battle of Rocca Bretica” - so much so that the peace treaty is remembered as the “Peace of Donna Brettia”.

The Bruzi are described in the Roman chronicles as a nation of warriors who were always ready for war. This character contributed to their greatness, but also to their downfall: after fortifying their settlements and beginning to mint money and consolidate their social fabric, they began to harbour expansionist ambitions against the cities of Magna Graecia, which were defeated and had to pay heavy tributes. The rise of the Bruzi worried Rome, which, after repeated defeats, annexed their territory to the Republic (270 BC); from then on, the Romans began to exploit the forests of Sila.

The embers of revenge, however, continued to burn: during Hannibal's invasion, the Bruzi rebelled against Rome, being harshly punished after the Carthaginian leader's defeat and becoming de facto slaves.

However, the embers of revenge continued to burn: during Hannibal's invasion, the Bruzi rebelled against Rome and, after the defeat of the Carthaginian leader, were severely punished and became slaves.

San Giovanni in Fiore is the largest town in Sila and is considered a kind of capital of the region.

The village lies in the Sila Grande area and owes its fame to the Abbazia Florense, founded by Abbot Gioacchino da Fiore - the great revolutionary prophet from Calabria mentioned in the XII canto of Dante’s Paradise.

The excellently preserved abbey is still the town’s main attraction and, despite the various modernisations it has undergone over the centuries, it still retains some original elements, such as the lobed rose windows. The Gothic-style portal hides the simplicity of the interior of the Romanesque church (found after the Baroque part was demolished), which is enriched by the extraordinary play of light in the tracery behind the apse - some claim that the composite figure refers to Joachim's theological studies on the Trinity.

The remains of the founding abbot rest in the crypt of the church.

Lago Ampollino is the first of three artificial lakes created on the Sila plateau by the construction of a dam, inaugurated in 1927 in the presence of King Vittorio Emanuele III.

It washes around three different provinces: Cosenza, Crotone and Catanzaro. It is connected to Lake Arvo by a penstock and its water feeds a hydroelectric power station. As in Lake Cecita, traces of ancient settlements from the Bronze Age have been found in Ampollino: Daggers, axes and halberds.

The typical sweet of the Cosenza region is the Pitta ‘mpigliata and San Giovanni in Fiore is its place of origin. The dialect name comes from Semitic Arabic and Hebrew, where pita means “crushed”; however, the origin of the cake dates back to the 18th century, when it was used in wedding ceremonies.

The Pitta consists of several loaves of shortcrust pastry enriched with Cognac or Vermouth, orange peel and other flavourings, and filled with dried fruit, sultanas and honey. The Girelle are arranged side by side in a round mould which, once baked, keeps for the duration of the celebration.

There are no overnight accommodations in Caporosa; you will have to pitch a tent (perhaps near the lake where there is plenty of space).

The starting point can be reached by bus, starting from the city of Cosenza and changing at Camigliatello. 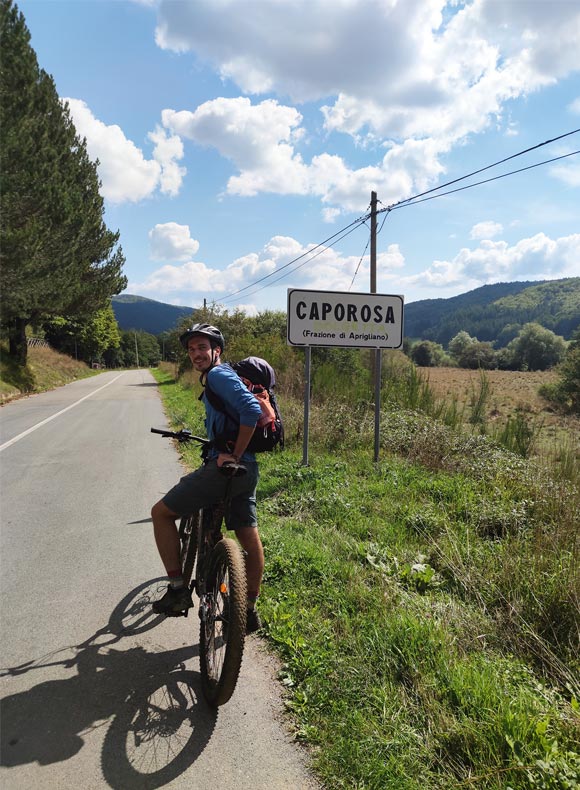 “We change vehicles and tackle the stage by mountain bike. At the end, we eat a heavenly sandwich at the Spineto aid station…” 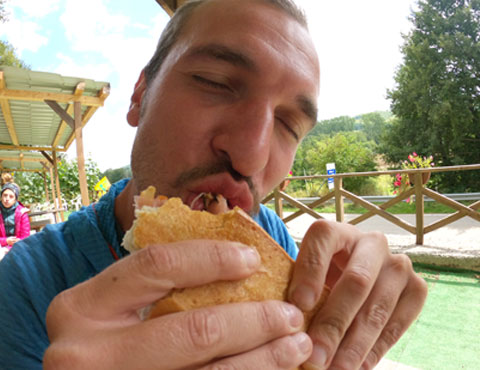