A rather long stage with great differences in altitude, but accompanied by the beautiful views that the Sila still has in shop for us: the Tacina valley, the Piciaro waterfall, the magical Gariglione forest, the Soleo Valley...

During the stage you come across several barbed wire gates that you have to open (and close again, always!).

In the Val Tacina, the barbed wire fence has no gate that can be opened, and you have to find a place to climb over the wire or cross under it (in summer, it is advisable to use the dry stream bed).

In some sections of the stage (especially in Val Soleo), the route is not always visible on the ground and the markings are not continuous: it is good to follow the GPS track.

The only water point on the climb to Colle del Comunello (in the first section of the stage): take a good supply.

We leave Caporosa and the asphalt road to take the wide path that runs along the western shore of Lake Ampollino, up and down; the landscape is always magnificently Nordic. Then it’s all downhill to cross a small river and reach the provincial road, which we follow to the left for about 1 km before turning right and passing a private property barrier (we pass a village, this should not be a problem); shortly afterwards we pass a gate (it might be locked, if so you might have to climb over) and along a dirt track we tackle the climb (about 400 m height difference) into the pine forest.

After a few hairpin bends we reach Colle del Comunello and after a few ascents and descents we start the descent (about 250 m drop) towards Val Tacina: the panorama that opens up before us is truly remarkable, with alpine reservoir meadows and beautiful Podolica cows grazing here. We follow the valley in an easterly direction, trying to cross the course of the Tacina river and the barbed wire fence at the first opportunity (there is no entrance, you have to figure out where to cross, but we recommend taking advantage of the river bed and going under it). Then we start to slowly gain height on the south side of the valley and, after a flat section (where we admire the Piciaro waterfall!), we tackle the second climb of the day (about 200 m height difference), which is very steep in places and leads into the beautiful beech and pine forest, bosco di Gariglione. After passing a beech tree with many trunks (truly spectacular), we come to an asphalted road: not far away (just below Monte Gariglione) is the Rifugio Grandinetti, where the tired can break off the stage. If we want to continue, we simply follow the road to the right and then pass a barbed wire gate on the left and take a path downhill. After the short descent, we enter the Val Soleo: the path is not always very clear and we have to keep an eye on the GPS track with some ups and downs. Finally we come to a large clearing and after a few fords we continue almost level until we come to an asphalt road, which we cross.

We take a slightly sloping dirt road (about 100 m drop) back into the woods, we go around a small water house and after less than 1 km we take the path on the left (not easy to see, we have to keep an eye on the GPS track) that leads to the Crocchio river; we cross the river on a small cement bridge, we go slightly uphill on the dirt road until we meet an asphalt road on the left; not even half a kilometre and we are in Villaggio Buturo.

It lies between 1,500 m and 1,750 m in the Sila piccola area and consists of a forest of larch pines and silver firs. The area was owned by the Bourbons until the 19th century.

After the fall of the Spanish crown, it was sold to the German company Hulsberg and finally expropriated by the state during the First World War. The English writer Norman Douglas visited Monte Gariglione on his travels through Calabria and was impressed by its wilderness, which seemed like an untouched area in view of the sparse anthropisation. The reserve's woods include the Prometeo, a monumental tree that, at 35 metres, is the tallest fir in Italy.

Everywhere in Calabria, quotations from George Norman Douglas (1868-1952), the British writer known for his 1917 novel South Wind and for Old Calabria, in which he recounts his travels through southern Italy, resound. Accused of sexual harassment in England, the writer fled into exile in Italy, taking a special interest in Capri, where he died after a long illness. He fell in love with the mythological and wild atmosphere of Calabria with its rugged and lonely mountains.

More recently, the naturalist Francesco Bevilacqua has traced the English writer's itinerary as he described it in Old Calabria.

In Ruvazzo there is a stone monolith around which myths and legends entwine. Its location has been a point of reference for the people who inhabit the area for centuries. It is 5 metres high and features 17th century engravings from the banditry era - some claim that it was the place where bandits hid their loot.

Among the absolutely fascinating waterfalls in the nature reserve are those of Crocchio, surrounded by subtropical vegetation - in particular a multitude of prehistoric ferns. Even more impressive is the Cascata dell’Inferno (Hell’s Waterfall), located in a deep, narrow gorge and embellished by a plane tree bathing its roots in the water. The highest waterfall is the Cascata della Rupe (Cliff Waterfall), which plunges no less than 57 metres with two jumps. A swim in the clear waters of these waterfalls is a must.

Among the most popular soft drinks in Calabria are carbonated coffee drinks. The two best-known brands are Brasilena from Catanzaro and Moka Drink from Cosenza. A unique piece in the panorama of Italian soft drinks.

The vintage character of the Brasilena images is particularly fascinating.

The nearest location that can be reached by bus is San Giovanni in Fiore, starting from the city of Cosenza. 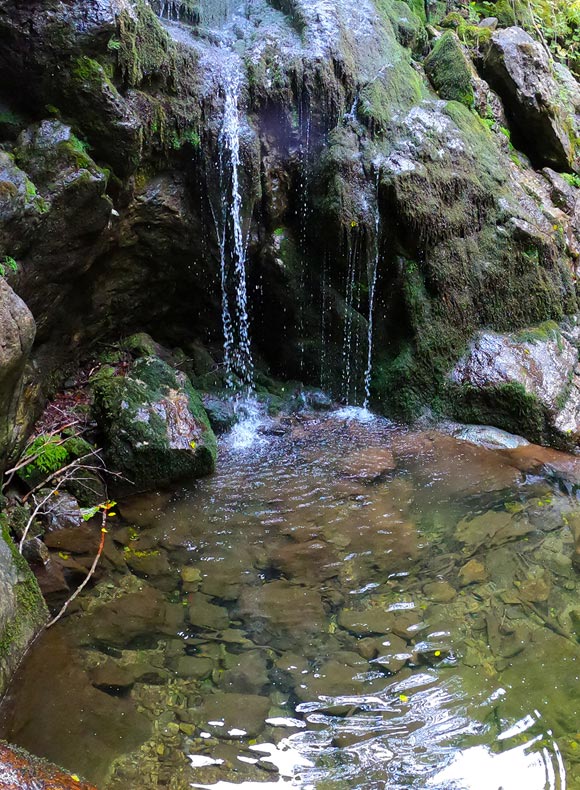 “The Piciaro waterfall is a happy oasis for our legs” 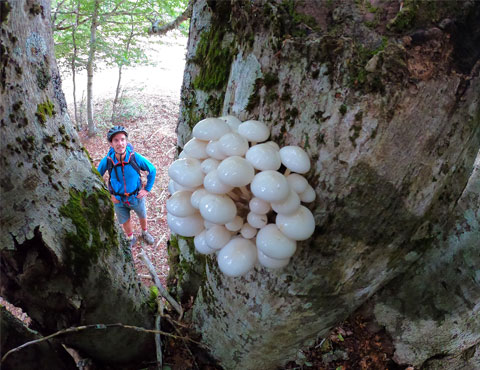