A stage of medium length and low altitude, of absolute beauty, between the crystal clear sea and the dolomite rocks of Monte Cofano (659 m): one of the most memorable of the Sicilian route.

The circuit of Monte Cofano on the coast is a variant of the Sentiero Italia (which leads up to the southern saddle of the mountain), favoured for its incomparable spectacularity.

We leave Macari and, on a small asphalt road through the olive groves, we descend just until we reach the large beach that stretches as far as Monte Cofano. We continue on an asphalt road skirting the beach, then turn onto a dirt road and continue, passing some wonderful coves of crystal-clear water on our right. We then arrive at the base of the eastern slope of Monte Cofano; after a refreshing dip, we take the path that goes up (about 100 m height difference) to the Grotta Perciata, characterised by its passing hole. We then descend steeply (about 100 m drop) back to the coastline and continue up and down, just above the sea, suspended between the sea cliffs and the reddish stacks of Monte Cofano.

After a short ascent to the Grotta del Crocifisso, we continue on until we reach the imposing tower of San Giovanni, then turn south and, taking a dirt road, cross the wide plateau that underlies the western slope of Mount Cofano. We thus reach the splendid Grotta Mangiapane (made famous by an episode of the series Il commissario Montalbano), with its village set among the rocks, an excellent spot for a snack.

Finally, keeping to the western slopes of Mount Cofano, we reach the southern end of the plateau, at the foot of the old quarries, to tackle a short climb (about. 100 m height difference) on a path, after which we cross the road and pass through the beautiful centre of Custonaci.

Within the municipality of Custonaci stands Mount Cofano, a 659-metre-high limestone promontory overlooking the sea, characterised by dwarf palm meadows.

Another rare local native plant is the Sicilian heather; but there are also species from the Americas, such as the prickly pear and the American agave. From the top of the mountain (a bit of a strenuous climb but definitely not to be missed, for the well-trained!) you can enjoy a wonderful view of the entire coastline.

A renowned marble from Custonaci is the perlato di Sicilia: it is the marble found in St. Peter’s Basilica, the Royal Palace of Caserta or the Milan railway station.

The colour is a light ivory tending to arabesque brown - reminiscent of the inside of shells. Inside the stone, in addition to the microfossils, there are numerous yellow-brown veins, given by the clay minerals. The main quarries are located in this area: this is why Custonaci has been named “International City of Marbles” and with its 62 square kilometres it represents the first marble basin in Sicily and the second in Europe.

During investigations by the French palaeontologist Raymond Vaufrey in 1925, flint tools and graffiti from the Upper Palaeolithic were found. The living nativity play of Custonaci takes place in the cave: since the 1980s, the tradition has been continued by about a hundred citizens who perform the typical Christmas play.

The most important church in the village is the  Santuario di Maria Santissima, dedicated to the patron saint of the communities of the Erice countryside. It was built in the 16th century on the site of a chapel dedicated to the Virgin of the Conception.

The devotion to the Madonna is linked to the 15th century painting of the nursing Madonna, from the school of Antonello da Messina. The painting was on a French ship bound for Alexandria. When the sailors got caught in a terrible storm, they vowed to found a church in the place where they could save themselves.

In the municipality of Visicari there is a zoomorphic monolith that resembles a horse and is called the Cavallo del Sole di Custonaci. It is about 1.70 m high and rests on two fragile pillars that have been worked by human hands.

During the winter solstice, the sun sets right between the legs of the animal. Nothing is known about its construction. Some suspect that it is a prehistoric construction that may have served as an astronomical calendar.

The deep- fried dessert of Trapani is the Sfincia, typical of St Joseph’s Day, which, along with Father’s Day, is the first holiday of spring.

It is a pancake made with a mixture of flour, egg, yeast, lemon peel, Marsala wine, milk and sugar: The consistency is as soft as a sponge, so many trace its name to the Latin spongia (“sponge”). It is an ancient dessert that some claim is even mentioned in the Bible or the Koran - which would be plausible, since numerous Arabic or Persian breads and cakes are baked in oil.

Besides the simple Sfincia, there is also an enriched version with ricotta cream, pistachio seeds or candied orange peel. The Sfincia Fest has been held in Custonaci since 2007.

A grape variety widely grown in western Sicily is Grillo.

It seems to have arrived here only after the advent of phylloxera. Even today, it is one of the most important grape varieties for the production of Marsala, the famous fortified wine.

It is pressed in pure culture and is one of the best Sicilian white wines. Traditionally, the vine was grown in the alberello system, but today low trellis cultivation is more widespread.

A typical product of the Trapani coast is the tuna Bottarga: this is the bag containing the eggs (baffa) of the tuna, which are salted and dried. A delicate process entrusted to the master salter, the guardian of an ancient tradition. Both the type of tuna and the drying process can result in completely different products, varying in size and colour.

This tradition can be traced back to the time of the Phoenicians and similar products can be found throughout the Mediterranean - even in Japan, where karasumi is made from mullet roe.

Botargo is used as a topping for many dishes, including pizza, which is filled with strips cut at an angle. 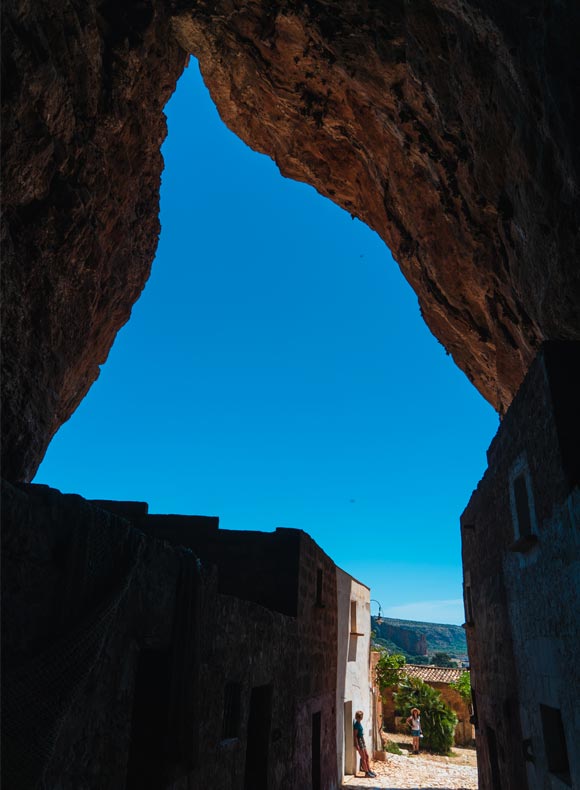 “All is silent, even our souls, in front of such beauty” 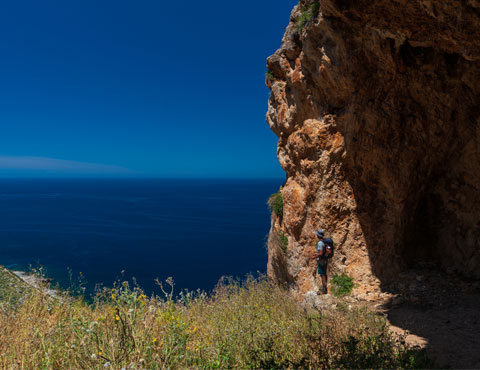