A stage of medium length, good altitude differences and great charm, in the heart of the famous Riserva dello Zingaro (Zingaro Nature Reserve).

The combination of rocky walls and seascape characterises the entire stage.

The Sentiero delle Orchidee (Orchid Path) represents a variation on the Sentiero Italia (which stays low until the ascent to the Passo di Monte Lupo), preferred by everyone for the panoramic nature of the stretch, as well as the lower presence of tourists.

You have to buy a ticket to enter the Zingaro Nature Reserve.

We leave Scopello and drive on asphalted roads to the entrance of the Riserva dello Zingaro. After buying the entrance ticket, we continue along a wide, flat path until we come to a fork in the road that leads to Cala Capreria on the right (worth the detours...) and to the Sentiero delle Orchidee (Orchid Path) on the left. We turn left and begin the climb (about 300 m height difference) on a well-marked path with a firm but steady incline. The path then turns into an up and down with magnificent views of the sea. So we continue north past some old forestry houses; then, after another small climb, we reach the old hamlet of Contrada Cusenza, whose old houses are used (in part) as bivouacs for hikers; this charming hamlet is the ideal place to have a snack and take advantage of the shade and drinking fountain.

Back on the trail, we take the road to Passo del Lupo and tackle the last part of the climb (about 200 m height difference). When we have almost reached the summit, we take the path to the left and stay just below the edge of the ridge, then we descend near a small forestry office building. Then we start the long descent (about 600 m drop) towards Macari. The path is quite steep and winds between vertical limestone walls, while the beautiful coastline towards San Vito Lo Capo reveals itself below us: the scenery is breathtaking. Finally, we return to the paved road (though still steep) to reach the small coastal village: The coves are waiting for us.

Macari is a hamlet in the municipality of San Vito lo Capo that, in addition to the crystal clear waters of the bay to which it gives its name, also offers an exceptional view of Monte Cofano. The area, already an important tourist destination, became famous thanks to the RAI television series Màkari, based on the novels by Gaetano Savatteri.

The main character Saverio Lamanna, played by Claudio Gioè, is an investigative journalist who is always trying to solve new mysteries in the area - a character similar to Camilleri’s more famous Commissario.

San Vito Lo Capo is a tourist town that has developed around an old Saracen fortress.

The town hosts many events, including the San Vito Climbing Fest and the... International Kite Festival: from 23 to 29 May, the beach of San Vito lo Capo is filled with colourful kites!

The landmark of the Macari region is the Tonnara del Secco, whose name refers to the shallow water. Built in the 15th century at the behest of Ferdinand of Bourbon, the structure was extended several times over the years until it was finally closed in 1969. Next to the ruins of the tonnara are fish processing facilities dating back to the 4th century BC.

Some scenes from the famous feature film Il Commissario Montalbano and other films were shot here. Today, the tonnara is in a state of abandonment, waiting to be developed.

At the foot of the mountain, the Tonnara di Monte Cofano rises instead, enriched by the presence of the Tono Tower. It was in use until the end of the 19th century and was built in the early 15th century. With its impressive square star shape, it was also used as a fortress.

One of the landmarks of San Vito Lo Capo is undoubtedly the lighthouse.

It is an impressive 43 metres high and shines for over twenty nautical miles. It was built in the 19th century and began operating in 1859, and has remained in continuous use to this day.

In the historic centre of San Vito Lo Capo is the town’s Sanctuary, which dates from the Roman-Byzantine period. In the 16th century, the sanctuary was converted into a church fortress to protect against pirate attacks: The façade is characterised not only by the usual central rose window, but also by loopholes.

The crypt contains the already existing underground rooms. Many believers made pilgrimages here: numerous miracles have been attributed to the place. Inside the building is the museum that houses the treasure, consisting of the silverware, the wooden statue of the Immaculate Conception and the green chasuble (liturgical vestment) from the 17th century.

On the road from Macari to San Vito lo Capo is the Chapel of Santa Crescenzia, the place where the landslide that spared San Vito lo Capo and instead destroyed the village of Conturrana came to a halt - guilty, according to legend, of not having accepted young Vito’s sermon to convert to Christianity.

Apparently, Saint Crescenza did not obey the divine command not to turn around lest he witness the ultimate punishment and was paralysed with fear - hence the tradition of throwing stones into the shrine to overcome his fears.

One of the most important archaeological sites in Sicily is the Grotta dell’Uzzo, where traces of human presence dating back 10,000 years ago have been found. Inside the grotto, the remains of numerous animals have turned up, including rhinos, lions and mammoths, which were probably hunted by the people who lived in the cave. These remains are now in the Antonio Salinas Regional Archaeological Museum in Palermo.

There are numerous caves in the area, including: Grotta Mastro Peppe Siino (refuge for many families during the World War II); Grotta dei Cavalli (rich in red paintings) and Grotta dell'Isulidda, where engravings and drawings of deer have been found, dating back to the Upper Palaeolithic.

A typical dish of the Trapani tradition is the fish couscous: a real explosion of flavours, born from the tradition of the fishermen families to make a poor dish like couscous palatable. The processing of the wheat semolina into the small grains is a real ritual that has been handed down for generations.

Since 1998, the village of San Vito has hosted the Cous Cous Fest, an event that aims to strengthen the fraternity between the different Mediterranean peoples with this dish typical of the Maghreb - in addition to the many culinary and wine events, there are also musical ones where Italian and international artists have been guests. 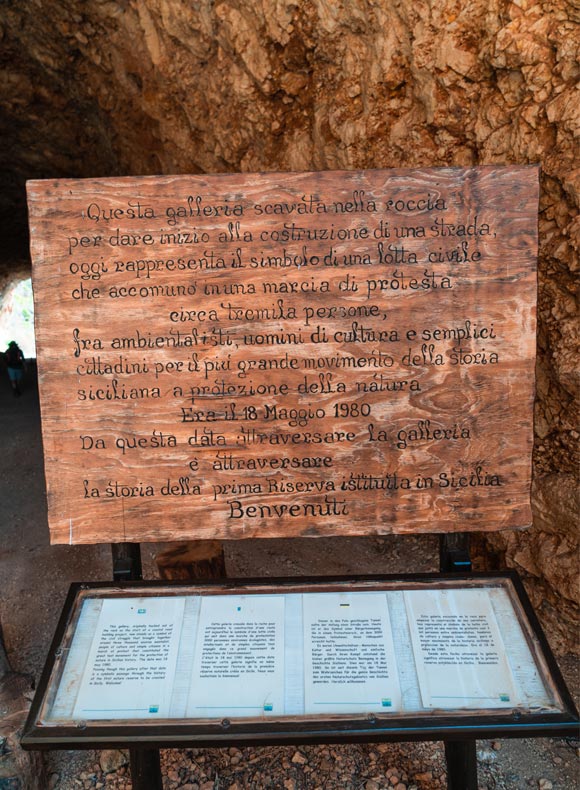 “When we enter the Zingaro Nature Reserve, we cannot help but thank the people who have done so much to preserve this paradisiacal corner of the world” 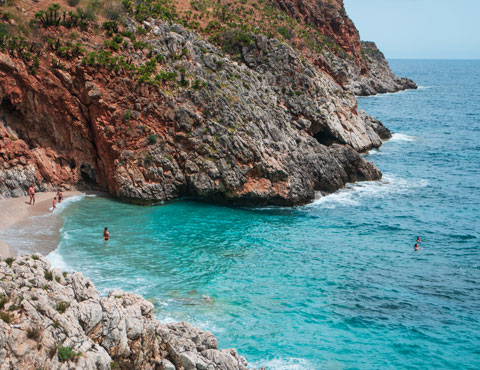