The climb to Monte Pollino is a variant of the Sentiero Italia (which leads from the Piana del Pollino towards Piano Gaudolino across the northern slopes of the mountain), preferred for the incomparable experience of the summit and the subsequent descent to the Patriarca, one of the oldest laurel pines in the Park.

The stage has considerable differences in altitude: you need a good breath and trained legs.

There are no water points until the end of the stage: take a good supply with you.

The stage ends in a spartan bivouac: if you want more comfort, you can continue from Piano Gaudolino via a steep descent to the Colloreto agriturismo (tel. +39347 323 6914), shortly after passing the motorway at the end of the trail; allow a good two hours of descent.

when to go
Giugno - Settembre
Suitable for

Leaving the Rifugio Pino Loricato, we walk on an excellent path along a short rocky outcrop with a beautiful panoramic view; then we enter the woods and, still on a good path, we walk up and down until we cross a small wooden bridge, after which we gain height (about 100 m height difference) until we reach Piano Jannace. After a short flat stretch, we gradually begin to climb again (about 200 m height difference) to reach the large meadow plain that leads us up and down from the slopes of the Serra di Crispo (2,054 m) to the Piana del Pollino at the foot of the Serra delle Ciavole (2,130 m), giving us a view of the numerous loricate pines that adorn the western slope of the mountain like watchful gendarmes.

We lose height slightly (about 150 m drop) and cross a large prairie. After crossing the Piano di Pollino, we start the climb (about 450 m height difference) to the summit. We return to the forest and have a decisive climb ahead of us to Colle del Malevento (1,970 m), where we return to the open. From there we follow the ridge on a path that is not always very clear but easy to follow (look out for the markings) over partly rocky terrain. Thus we reach the summit of Monte Pollino (2,248 m): a splendid view from the Tyrrhenian to the Ionian Sea, passing by the nearby peak of Dolcedorme (2,267 m, the highest of the Pollino group and of the entire Southern Apennines).

Once we have strapped the rucksack over our shoulders, we set off on the long descent (about 550 m drop). First we follow an easy path along the south-western flank of the mountain, then, after reaching the saddle from which the direct path would continue, we turn 90° across a wide meadow basin. After another bend, we descend steeply again until we reach the Patriarca, one of the oldest Loriccio pines in the Park (almost 1,000 years old!), a true natural monument. After paying our respects to the ancient natural monument, we continue a little further down the steep slope. At a fork in the path, we turn right (without climbing Pollinello) and follow an easy, practically flat cross path that leads us in the shade of the wood to Piano Gaudolino, where we find a pond with a fountain, perfect for relaxing tired legs.

The Pollino National Park stretches between Basilicata and Calabria, from the Tyrrhenian Sea to the Ionian Sea. It represents a natural barrier separating the two regions, but also a cultural and naturalistic bridge of enormous value.

With its 192,565 hectares, the park is the largest protected area in Italy: it was designated as such in 1993 and has been a UNESCO since 2015 . The peaks, formed by ancient glaciers, have many unique features: Glacial cirques, snowfields, moraine deposits, fossils of rudists (molluscs), prehistoric caves (such as the Romito Cave), karst plateaus and sinkholes.

The Pollino represents a naturalistic unicum for our country and for the whole world.

Between the peaks of the Pollino, at an altitude of about 1,900 metres, stands the oldest living tree in Europe (although several areas in Italy attribute this record to their own tree).

It is a good 1,230-year-old pino loricato nicknamed Italus. Scholars have given it this name in honour of the Enotrian king who lived between the Bronze and Iron Ages. The imposing tree, which is more than 10 metres tall and 160 centimetres in diameter, stands on a rocky ledge on the southern slope of the Serra della Ciavole that is difficult to access. Due to its hollow boot, the age of Italus was determined by radiocarbon dating, which provided a wealth of information about the climate of the last 1000 years.

In addition to the magnificent peaks and exceptional fauna, the park also stands out for its beautiful gorges and canyons - the gorges of the Lao River are an incomparable spectacle: rafting with the guys from Pollino Rafting, who are very friendly and knowledgeable, is highly recommended.

The symbol of the park is undoubtedly the pino loricato, a very rare species that manages to survive even in the most hostile habitats. These ancient guardians of the park are called gendarmes.

This tree represents a plant species that is considered a living fossil. This imposing tree, which adapts to the most difficult terrains and conditions, lives at an altitude of 800 to 2,200 metres - the only large-trunked tree that lives above the beech forests. It often stands alone, but can sometimes be found in small groups; when climbing rock faces, it is absolutely fascinating. There are no fewer than 138 specimens in the park.

The most striking feature is the bark, with its square plates reminiscent of the armour of Roman soldiers, the lorica, from which it takes its name - if not, in the most vivid imagination, the scales of a giant reptile.

The origin of the loricato pine is associated with a plant migration: during the Ice Age, the Italian peninsula was united with the Balkan peninsula.

Peperone di Senise IGP is one of the products used to make the famous “peperone crusco”. After harvesting, it is dried in long hand-knotted chains 'nsertate a mano.

After drying, the pepper is sautéed in boiling oil and then eaten whole or crumbled over many dishes.

Bivacco Gaudolino, on the homonymous plain (the rather spartan bivouac has 2 metal beds and a fireplace; you must bring your own mattress). Always open.

The nearest location that can be reached by bus is San Severino Lucano, starting from the town of Policoro with a change in Senise. 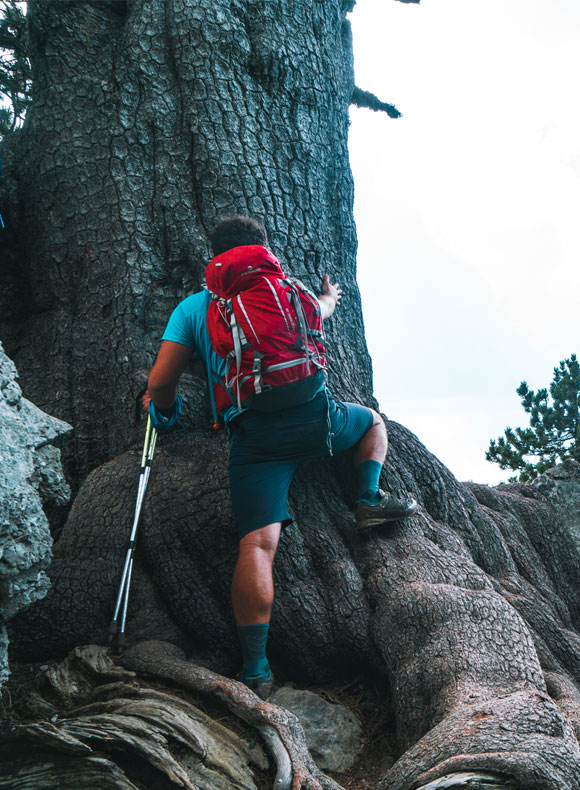 "The Patriarch is one of the strongest encounters on the Sentiero Italia: his folds are monumental" 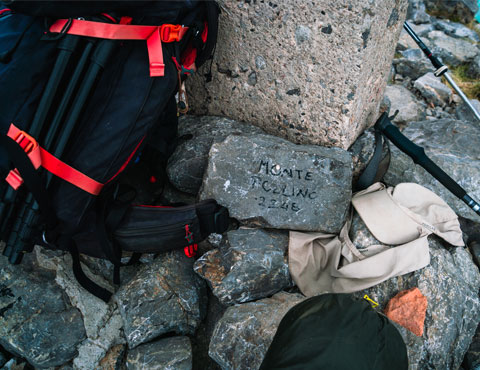