A medium-length, almost entirely (gently) ascending stage, mainly through the forest on a dirt road with a scenic last section that brings us closer to the heart of the Pollino National Park.

Some sections of the trail, in the second half of the stage, are covered in vegetation and it is often difficult to find the way: it is good to follow the GPS track.

We leave the village of San Severino Lucano and climb up through the village streets. At a picnic area we take a well-marked and well-trodden path and thus begin our long climb (about 600 m height difference). We continue uphill for about 1 km until we reach another stretch of asphalted road. Here we find a large carousel, a work of land art by the Arte Pollino initiative.

After a short stretch on asphalt, we turn left onto a wide dirt road through the woods, which offers a wide view of the Pollino peaks (including the Grattaculo peak). We continue on this comfortable road that climbs gently for about ten kilometres until we reach the picnic area of Acquatremola, where a fountain with fresh water awaits us. We take a short stretch of asphalt road and then immediately turn right into the woods. In this section the path is well marked but not always obvious. We continue slightly downhill (about 250 m drop) into the woods, then the path gets lost in the vegetation and although there are still markings, it becomes very difficult to see them (because of the many ferns) and we have to keep an eye on the GPS track.

We cross an asphalt road and tackle the last climb (about 400 m height difference, not to be underestimated) towards the sanctuary; the path through the forest is impressive and well signposted. After going around the imposing Pietra Jaccata, we leave the forest and remain uncovered until the end of the stage, crossing beautiful plateaus where we can see wild horses. As we ride along the mountainside, a beautiful view of the surrounding countryside opens up on our right. Arriving at the Sanctuary of the Madonna del Pollino, we order a cold beer and from the back of the refuge of the same name we enjoy the sunset and the view of the peaks ahead.

The origin of the cult of the Madonna del Pollino can be traced back, as so often, to a miraculous event.

According to legend, two women climbed to the top of Mount Pollino to pray in search of the Virgin, who had previously appeared to a shepherd. When they reached the summit without a drop of water, the Virgin appeared to them and quenched their thirst by gushing a torrent of water from a stone. In the cave next to the place where the miracle happened, they found a statue of the Madonna and Child covered with soil, which is still kept in the sanctuary today. Back in the village, the two women found that the illness of the husband of one of them had disappeared, so all the inhabitants decided to build a small shrine at the site of the apparition.

What the truth is is not known, but since 1700 the locals have always climbed up to the shrine (located at 1,537 m) in late spring, creating a great popular festival that combines the religious traditions of Calabria and Lucania. The 18th century statue is carried to the sanctuary on the shoulders of San Severino Lucano (a good 18 km, accompanied by songs and prayers).

There are numerous tree rites in Basilicata: in a syncretism between the sacred and the profane, the ancient ties of the population with this powerful territory are passed on.

In Terranova di Pollino, ‘A Pit is performed: on 13 June, the feast day of St Anthony of Padua, a fir tree boot felled in Cugno dell'Acero is pulled up and climbed. The tree is cut down on the last Sunday in May by the villagers, who flock there from all over the world: it is a great festival with dancing and banquets around the erected boot.

The festival of La Pitu e la Rocca, on the other hand, takes place in Rotonda, also during the festivities in honour of Saint Anthony, and it celebrates the ancient Lucan tradition of the wedding under the trees. The ancient rite is linked to the legend of the saint from Padua who spent a night under a fir tree in the locality of Marolo. The groom and bride of this wedding are a fir tree and a beech tree, which are joined together by grafting the crown of the fir tree onto the trunk of the beech tree. Here, too, there is dancing and feasting under the tree.

The feast of La Pitu e la Rocca, on the other hand, takes place in Rotonda, also during the festivities of Saint Anthony, and celebrates the ancient Lucanian tradition of marriage among the trees. The ancestral rite is connected with the legend of the Saint from Padua who spent a night under a fir tree in the locality of Marolo. The groom and bride of this wedding are a fir tree and a beech tree that are joined together, grafting the crown of the fir tree onto the trunk of the beech tree. Again, dancing and feasting take place under the tree.

Just outside the municipality of San Severino, along the path that leads to the Madonna del Pollino, there is a large carousel overlooking the Pollino massif.

It is RB Ride, an installation by German-born Belgian artist Carsten Höller, which he created for Arte Pollino. The carousel has a diameter of almost 17 metres. It consists of twelve small boats with seats, like a real carousel, and stands in the middle of nature, the work allows visitors to enjoy the landscape, changing the urban perception of entertainment: “The carousel represents an instrument to recover the value of time, reflection and contemplation, forcing the viewer who experiences it to question his own way of perceiving reality and his own certainties”. The artist seeks to change the viewer’s emotional experience by making his works a provocation that encourages him to question traditional systems of perception.

The Sanctuary of Madonna del Pollino has only been accessible by car since 1975, when a paved road was built.

The structure is characterised by three vaulted wooden naves. The religious complex, perched on an overhanging cliff above the Frido torrent, also includes a Pilgrim house that welcomes visitors. Not far from the sanctuary is a bronze statue by Daphnè Du Barry: the sculpture, more than 2 metres high, represents the Madonna del Pollino giving her son to the world with outstretched arms. The square where the bronze statue stands offers an impressive view of the Timpa di San Lorenzo or the Falconara.

The ancient forest of Cozzo Ferriero is one of the most beautiful beech forests in Italy: on its 70 hectares there are monumental beech trees as old as 500 years.

It is an important case study of climate change, as it is the southernmost centuries-old beech forest in Europe - and as such it is recognised as a UNESCO World Heritage Site.

The Melanzana Rossa di Rotonda PDO is traditionally native to the Rotonda area. It is a round ecotype with a characteristic orange colour tending towards red.

Its intense aroma is combined with a slightly bitter and spicy flavour. This vegetable is of African origin and arrived in this area thanks to settlers who went to Ethiopia during the Fascist period. The original species was more elongated; adapting to the Lucanian territory, it took on its current round shape. Its colour and shape, similar to that of the tomato, mean that the local people also call the vegetable a pummadora. It is used like normal aubergine, excellent in oil and pickled; its leaves are also used.

The starting point is reachable by bus, starting from the city of Policoro changing at Senise. 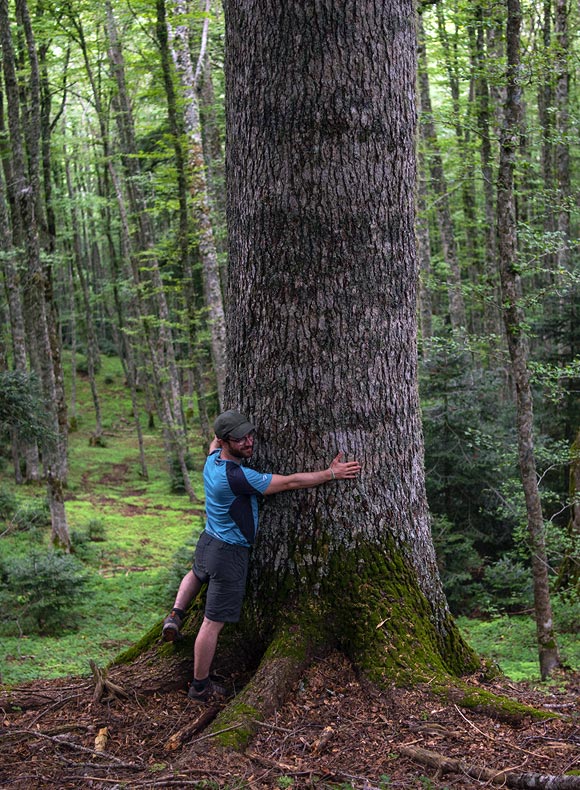 "Trees have a deep, intangible aura. We surrender ourselves in their embrace and try to listen to their millennial heart" 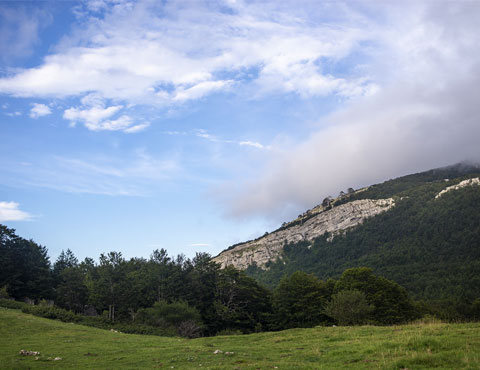