A stage of medium length and little difference in altitude, almost entirely in the forest. The crossing of the great Piano Novacco and, optionally, the climb to Cozzo del Pellegrino (1,987 m, the highest mountain entirely on Calabrian soil) are very beautiful.

No water points after Piano Novacco: bring a good supply.

We leave Masistro Park on an asphalt road and have to climb a slight incline before descending towards Piano dell'Erba. We take the dirt road that runs alongside the asphalt road and, on level ground, we soon reach the large Piano Novacco with its beautiful colours. After crossing it, we continue on level ground through the woods, then a new, short climb (about 100 m height difference), followed by a descent with the same altitude difference; at the end we flank Laghetto Tavolara and find an old, abandoned refuge just beyond. We begin the day’s climb (about 350 m height difference), which is entirely in the woods and never too steep, until we come across a gravel road that we follow for a few kilometres.

We reach the junction for Cozzo del Pellegrino (from which the more willing can deviate to climb the highest peak in all of Calabria: the climb at about 350 m height difference, while the descent to the ridge has a rather exposed initial section), we turn left and begin the descent (about 250 m drop), alternating between sections of gravel road and sections of path; just before our destination, in one of the few views afforded by the woods, we can observe some beautiful overhanging walls on the summit. From the Piani di Lanzo we then reach the road that takes us in a short time to the refuge of the same name.

Both Piano Novacco and Piano di Campolongo, located in the municipality of Saracena, form two large forested plateaus of the Monti di Orsomarso. These mountains belong to the Pollino massif. They are characterised by lower altitudes, but still offer spectacular landscapes: rocky peaks dominate deep valleys rich in beech forests.

In the early 20th century, the German company Rüeping S.p.A. used the plateau for timber production.

Cozzo del Pellegrino (1,987 m) is the highest peak of the Orsomarso Mountains, which are also part of the Pollino National Park.

It is dolomitic in nature and is characterised by a huge gorge that descends from the summit to Carpinosa (654 m), a difference in altitude of almost 1,300 metres. The mountains of the Dorsale del Pellegrino are among the snowiest in the entire region, as they are close to the Tyrrhenian coast.

Another peculiarity of this mountain range are the metalliferous veins of Monte Mula: used since prehistoric times, they are now abandoned.

The origins of the village of Saracena date back to the ancient city of Sestio, founded by the Oenotrians, an ancient population that lived between the present-day regions of Calabria and Basilicata (who came from Greece before the colonisation of Magna Graecia) and who took their name from Oenotro, the son of Lycaon (a mythological figure, ruler of Arcadia).

The Oenotrians were gradually replaced by peoples of Sabine origin and the new Hellenic colonisation.

The patron saint of Saracena is Saint Leone. In February, a torchlight procession is held in the streets of the town in honour of the saint, with singing and dancing. At the end of the procession, the villagers go to the bonfire (called fucarazzo) in their neighbourhood, where the celebrations continue with food and drink.

The village of Piano di Lanzo is in the municipality of San Donato di Ninea, which, like many Calabrian villages in the Pollino area, rises up a hill.

The name could refer to Ninea, a town founded by the Enotrians. In 1863, it was decided to name the municipality with this indication to distinguish it from the other places with the same name.

In the municipality of San Donato di Ninea are the grottoes of Sant’Angelo, which contain the rock sanctuary of San Michele Arcangelo.

The sanctuary, decorated with columns and frescoes, dates back to the Basilian tradition of the 5th century. Of particular interest is the painting depicting the Archangel Michael defeating Lucifer. Later, the caves became a place of worship among both the Lombards and the Byzantines, who brought with them the cult of Madonna dell’Angelo.

Once upon a time, hard work in the fields required hearty meals and it was common to carry one’s food in a hollowed-out loaf of bread - a great way of serving that is still used today. Inside the loaf you can find all sorts of things: the typical recipe is peppers with eggs.

The nearest location that can be reached by bus is Campotenese, starting from the city of Castrovillari. 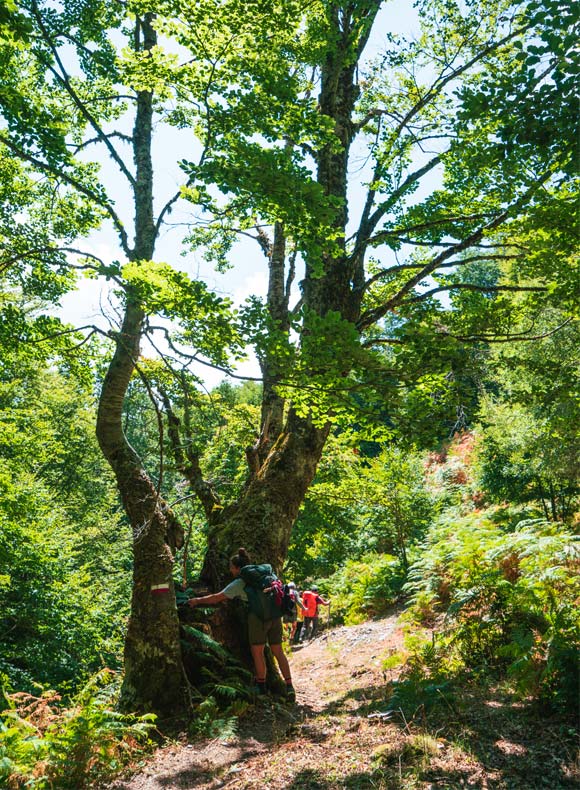 “The forest is one of our constant travelling companions, but we never get tired of it” 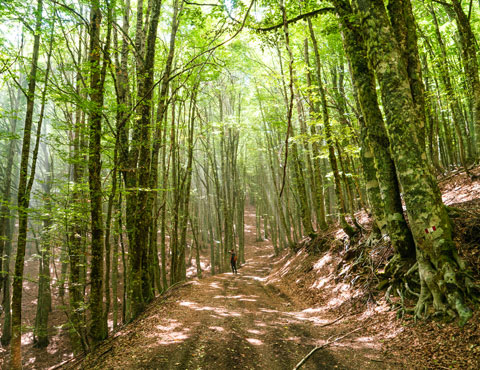