A medium-length stage, not particularly strenuous, leading to the beautiful Sanctuary of Madonna del Pettoruto. A pleasant path that for the most part goes through the woods and then offers some interesting views.

From the Casiglia fountain (cattle trough) you must keep to the right of a cattle fence about halfway up the slope towards San Sosti (watch out for the GPS track ); then you pass through a small gate which you must close again.

We start from the refuge in Piano di Lanzo with a very short asphalted section to immediately enter the woods that will accompany us for the first kilometres of the stage, on a recently marked and well-trodden path. With a gentle climb (about 200 m height difference) we reach the area Il Campo, a wide flat area, just outside the forest, from which we can admire Montalto Uffugo (1,761 m), a rocky promontory emerging from the dense vegetation.

After this short flat stretch, we continue along a well-marked path and face the long descent (about 1,200 m drop) that takes us to the municipality of San Sosti in about 10 km. During the descent we pass cattle pastures, watering places and some beautiful viewpoints with a view of the Sanctuary of the Madonna del Pettoruto, located in the middle of the bush. After finishing the trail, we continue on asphalt for the last section of the stage, climbing from the village (about 200 m height difference) to the Sanctuary; the ascent is always gentle until a final climb over steep switchbacks. At the top, there are several bars and souvenir shops.

The Sanctuary of the Madonna del Pettoruto is located on the slopes of Montea, on a terrace by the gorge through which the river Rosa flows.

The name of the sanctuary derives from the petrified morphology of the area. Its foundation, as with many other Marian shrines, is linked to the discovery of an image of the Virgin Mary by a shepherd boy. In this case, the story goes that when a young deafand mute shepherd boy discovered the image of the Virgin Mary carved into the rock, he miraculously received the gift of speech and the shrine was built as a result. According to legend, it was a certain Nicola Mario who carved the image into the rock in the 15th century. Fleeing an unjustified charge of murder, he had a vision of the Madonna and decided to carve it into the rock as a sign of devotion. A short time later he was acquitted of all charges and was able to return to his life.

The Sanctuary, which is visited by thousands of pilgrims, is famous for the Festa della Cinta. Every year on the first Sunday in May, the Virgin Mary is asked for protection from disasters: a little girl dressed in white from San Sosti carries a cord (spacu) soaked in wax to the Sanctuary of Pettoruto. After mass, the string is cut and distributed to the faithful throughout the area.

The tradition began in the 17th century, but was particularly popular after the 1783 earthquake that devastated the area.

Not far from the Sanctuary of the Madonna del Pettoruto stood the ancient city of Artemisia, a settlement dating back to the Middle Neolithic, a period from which the remains of a protohistoric hut date. The settlement, characterised by the shape of the Roman castrum, housed the different population groups until the Byzantine period. A ceremonial axe known as the “axe of San Sosti” or “hammer of Kyniskos” was found in the archaeological area in the mid-19th century. The bronze find shows a double head with axe and hammer, on which a dedication to the goddess Hera is engraved in Achaean dialect, written in the Doric alphabet.

The axe of San Sosti, whose manufacture is attributed to the school of Sibari, is now in the British Museum in London. It was sold at the end of the 19th century by the Roman goldsmith Alessandro Castellani, who came into possession of the axe after several changes of ownership. Since its discovery, the axe enjoyed instant fame.

In the gorge of the Rosa river is the Waterfall of ra’ Giovanni; the evocative landscape is enriched by the ruins of the old watermill.

Not far away are also the ruins of the Castello della Rocca, an ancient Byzantine fortress that defended the entrance to the Pettoruto Gorge and the area below, including the ancient Via Istmica. Inside, Roman ceramics from the first centuries AD have been found.

Maccheroni al ferretto are characteristic of the area. They used to be made with leftover fresh pasta, using a knitting needle to produce a kind of macaroni, hence the name.

It is a durum wheat pasta format common throughout Italy, in Calabria called Maccaruni cu fierru, but also Fileja, Fusilli or Scialatielli.

There are no accommodation facilities at the Sanctuary of the Madonna del Pettoruto.

We recommend requesting hospitality for the night at the Sanctuary, having a mattress and sleeping bag with you. Tel. +390981 61082

The nearest location that can be reached by bus is San Donato di Ninea, starting from the city of Castrovillari. 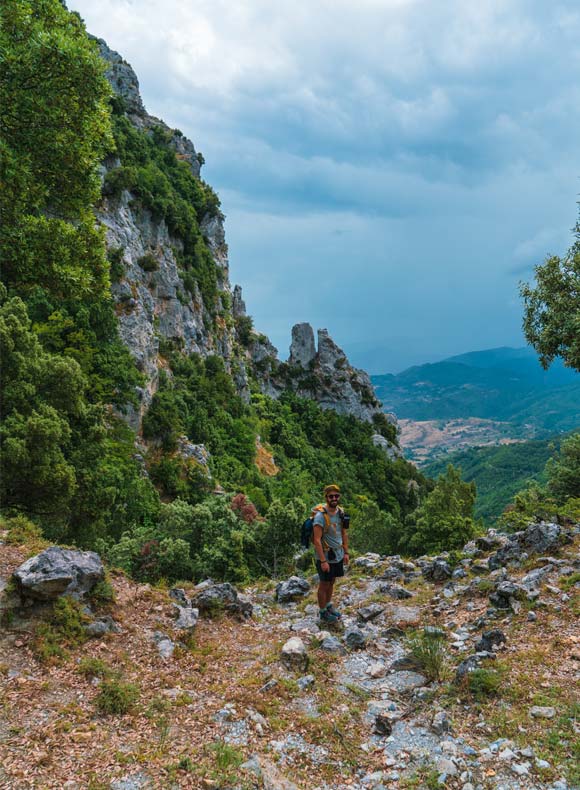 “The landscapes change abruptly: from vertical rocky ridges we pass in an instant to the horizontality of wide, flat pastures” 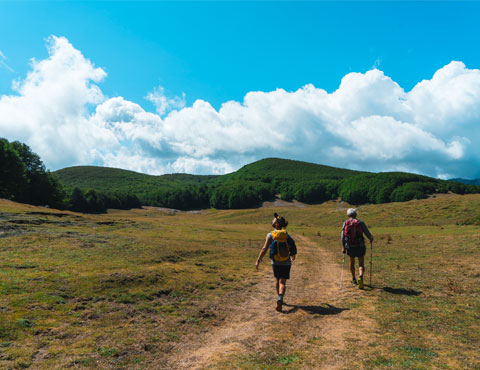