We leave behind the overhanging walls of Rocca Busambra and descend to the beautiful Piana degli Albanesi, with its lake and Albanian culture.

Descending from Monte Leardo, we suddenly pass a barbed wire gate and take a path that is not easy to see at first: monitor the GPS track.

We leave the Masseria Rossella on a wide gravel road and go around Monte Rossella from the east, climbing slightly (about 250 m height difference), through meadows and cypresses, until we reach the summit of Monte Leardo (815 m), from where we have a beautiful view to the north. After passing a wire fence, we take a path that descends steeply (about 350 m drop) and is not easy to see at first. Shortly after, the path improves and we descend in the shade of the forest until we come across a small white road in the large plain.

We walk among the fields until we reach the edge of the hamlet of Santa Cristina Gela, then turn west and join the provincial road that skirts part of the large Lago di Piana degli Albanesi from the north. At the northern end of the lake, we take the small road to the right, pass under a subway and immediately turn left onto a dirt road; finally, we return to asphalt and shortly reach the village of Piana degli Albanesi with its unusual atmosphere, its Orthodox churches and faces with Slavic features.

Piana degli Albanesi is the most important Arbëreshë centre in Italy.

The Arbëreshë are the Albanians of Italy, an ethno-linguistic minority that settled in southern Italy in the 15th century. They settled in southern Italy in the sixteenth century. The people from the Kingdom of Albania founded numerous towns that have retained their customs and traditions to this day, especially the Arbëreshë language - a variant of Albanian derived from the Tosk - or Tosco - dialect. When they fled the Ottoman invasion of the Kingdom of Albania, they brought with them the Greek-Byzantine rite, which is still at the heart of society today. The struggle against Ottoman-Turkish domination is called rilindja, which can be translated into Italian as rebirth or resurgence and represents Albanian national sentiment.

The exodus began after the death of the leader Giorgio Castriota Skanderbeg. A gradual diaspora that began in 1485 with the arrival in Sicily of refugees supported by the Serenissima to repopulate inland centres hit by disasters and famine. In the following century, new exiles from Albania found a safe haven in the towns of Arbëreshë, where they could continue to live in their own country.

The inhabitants were involved in many Italian events and were instrumental in supporting Mazzini's movements and Garibaldi's advance on the island.

During the Fasci Siciliani movement (late 19th century), the workers of Piana degli Albanesi, led by the doctor Nicola Barbato, engaged in numerous clashes with the forces of order. The urban proletarians, workers and employees, who took to the streets to demand their rights and call for new reforms that would guarantee fair social conditions, were harshly repressed by the government of Francesco Crispi.

The same tenacity of the people was shown towards the mafia phenomena. On 1 May 1947, in the nearby town of Portella della Ginestra, what many believe was the first mafia attack in the modern sense. The gang of the bandit Giuliano shot at a group of peasants who had gathered to celebrate Labour Day: eleven people were killed and many were injured. The event received an enormous echo throughout Italy and the link between political and mafia power in the suppression of workers’ demands was immediately obvious. To commemorate the terrible massacre, a work of land art was created at Portella della Ginestra as a memorial.

Piana degli Albanesi is also considered the birthplace of Arbëresian literature, the language of the diaspora. The language is also passed on orally, thanks to the papas (priests of the Greek-Byzantine rite) who say mass in Arbëresh - except on Sundays, when mass is celebrated in Greek.

Among the many illustrious personalities who contributed to the development of Arbëresh literature is Giuseppe Schirò, the first university professor in Italy to hold the chair of Albanian language and literature. The poetic and textual value of his works (the poems “Rapsodie Albanesi” and “In terra straniera”) was also recognised in his homeland.

Many of the Arbëresian writers and poets expressed themselves thanks to La Nazione Albanese, a magazine founded in 1897 by Anselmo Lorecchio, which not only passed on folkloric traditions but also enriched them with civil and political content.

Piana degli Albanesi has the oldest reservoir in Sicily, which at 310 hectares is also one of the largest. The reservoir was created in 1923 by damming the course of the Belice Destro river, creating a fascinating landscape setting.

The water of the lake, which overcomes a total height difference of 475 metres, was used to drive the turbines of the Casuzze hydroelectric power plant in the city of Palermo - today the one in the Guadalami district. Over the years, the lake has been home to numerous animal and plant species, making it a WWF oasis.

The oldest church in Piana degli Albanesi is that of San Giorgio, but the cathedral is that of San Demetrio Megalomartire, built in 1589: It is the seat of the Eparchy of Piana degli Albanesi and was the seat of the bishop from 1784 to 1924. Orthodox churches do not have statues, only frescoes, and the Cathedral of St. Demetrius stands out for its beauty. They were painted by Pietro Novelli between 1641 and 1644. The wonderful nave, enriched by the richly painted coffered ceiling, bears an irreparable damage to the artistic heritage: the interventions in the 1960s destroyed the side chapels, numerous baroque stuccoes and two altars made of precious red marble from the region. Nevertheless, it remains today a wonderful example of the fusion of aspects of Western and Eastern Christianity.

The guardian of the city's history is the Museo Etno-antropologico Nicola Barbato (Nicola Barbato Ethno-anthropological Museum), housed in the buildings of the former Greek ritual oratory of San Filippo Neri.

Piana degli Albanesi is best known for its Cannolo, which many say is the best in Sicily.

It is remarkably large and differs from the others in that its ricotta is coarse and less processed. Perhaps its secret lies in its proximity to the pastures - and thus the freshness of the product.

The Sicilian cannolo is a sweet consisting of a cone-shaped wafer made of flour, egg and wine, fried in lard and filled with ricotta worked with icing sugar.

There are many bars that serve it; the Extrabar at the end of the slope, along the main street of the village, is particularly noteworthy.

The local gastronomy offers a wide range of traditional Sicilian-Albanian dishes. Among the many dishes, the bread Bukë, a round loaf made according to the ancient method of natural fermentation, the focaccia (Kulurunë) and the gnocchi (Strangujët), flavoured with tomatoes and lots of basil, stand out.

Traditional for Easter time are the red eggs, eaten after noon on Holy Saturday. These are boiled eggs to which a red dye has been added - in the past they were coloured with red onions or beetroot.

There are several accommodation facilities in Piana degli Albanesi.

The nearest location that can be reached by bus is Marineo, starting from the city of Palermo. 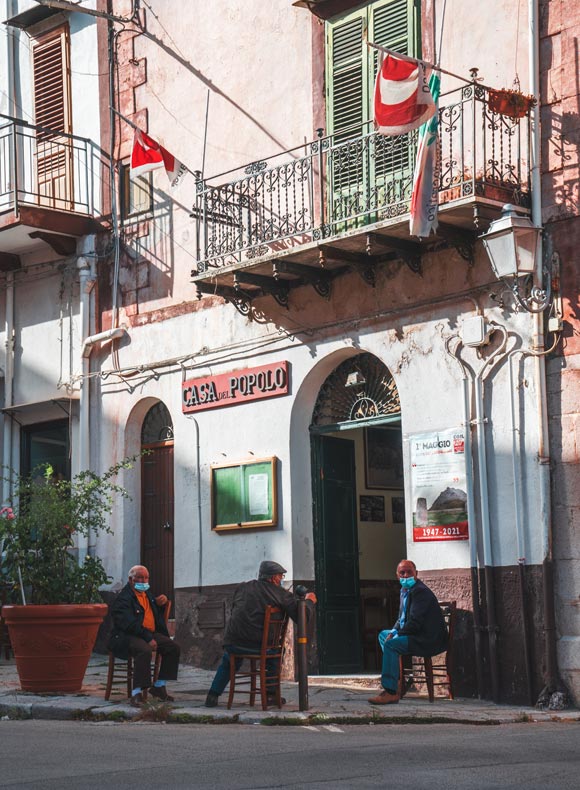 “Piana degli Albanesi is one of the most fascinating villages we have come across, because its history is as old as it is young” 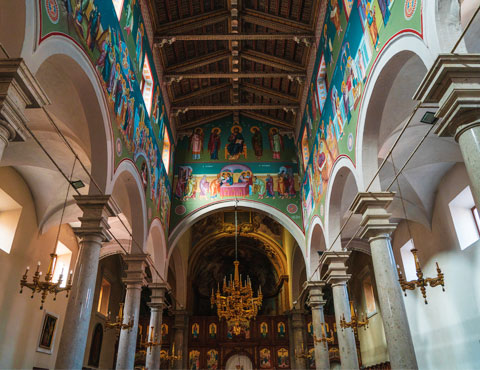