The highlight of the day is the descent on the eastern slope of Pizzo Aiello, which offers a very romantic landscape.

You pass through several barbed wire gates which you have to open (and close again!).

There are no water points, so take a good supply with you.

After crossing the main road at the end of the first descent, you will come across a padlocked gate that you have to climb over.

In some places, the path on the ground has completely disappeared into the vegetation and you have to guess it (especially on the last stretch between Pizzo Mirabella and Pizzo Aiello): it is good to keep an eye on the GPS track.

We leave Piana degli Albanesi and begin the climb (about 350 m height difference) to the Pizzo Garrone pass on asphalted roads; the gradient is sometimes demanding, the shade comes and goes. After passing through a gate, we continue on a dirt road surrounded by cypresses and downy oaks until we reach the last part of the climb halfway up the slope; we take the path and reach the Forcella (where there is an open, empty hut that serves as a shelter in bad weather) with a final small climb.

From there we tackle the descent (about 250 m drop), first on a path (not easy to find), then on a dirt road, from which we see the large city of Palermo to the north for the first time. Finally, we reach an asphalt road, join the main road and cross it on an overpass.

We start the second climb of the day (about 200 m height difference). After climbing over a gate, the road becomes a dirt track, then a rather shaky path as we reach the northern slope of Monte Matassaro Renna. After a stretch of rather invasive vegetation, we see a wooden ladder a little below us, on the right; we use it to climb over the barbed wire and find ourselves on a wide plateau, which we follow to the left until we come across a new dirt track.

When we reach a hill, we start to descend gradually (about 450 m drop). We pass some old abandoned buildings (including an old refuge) and shortly after passing some round concrete tubs, we take the path to the left to enter the valley between Pizzo Aiello (930 m) and Pizzo Mirabella (1,165 m, pointed and therefore alpine). The route is very impressive, but the path is often overgrown with vegetation (thorny!) and you have to watch where you step. After passing the remains of an old fortress, we turn west and continue along the slope, overlooking the village of San Giuseppe Jato and the fields of the Conca d'Oro, so called because of the lemon trees. We pass the last barbed wire gates and after an up and down we reach the Masseria Dammusi.

The area of Masseria Dammusi is named after the eponymous Masseria La Chiusa, which was established in the late 15th and early 16th centuries.

The fief comprised an enormous amount of cultivated fields and more than a hundred families lived on the Masseria and worked for the feudal lord. It was renovated in 1740 by the Venetian architect Marvuglia and is a perfect example of rural architecture. Once, the life of the village took place inside, so that the school and the church were also located there. The agrarian reform in the 1950s put an end to the history of the Masseria.

San Giuseppe Iato stands on the site where the Greek city of Iatas once stood, probably a settlement already inhabited by the Elymians, which occupied an exceptional strategic position at an altitude of 800 metres.

Attacked by the armies of Pyrrhus, the city came under Carthaginian rule before becoming one of the most important Roman centres in Sicily. After being under Arab rule, it was destroyed in the 13th century by Frederick II. Today you can visit the ruins of the ancient city in the Monte Jato Archaeological Park.

In addition to the valuable archaeological finds relating to the city of Iatas, rock paintings dating back some 15,000 years have also been discovered in the Grotta Mirabella in the Jato Valley.

The area above Palermo where we are is called “Conca d'Oro”: it is a flat area with a particular climate that has allowed a rich agricultural development - especially that of citrus fruits, to which the area owes its name: the late mandarin Ciaculli variety stands out in particular.

The starting point can be reached by bus, starting from the city of Palermo 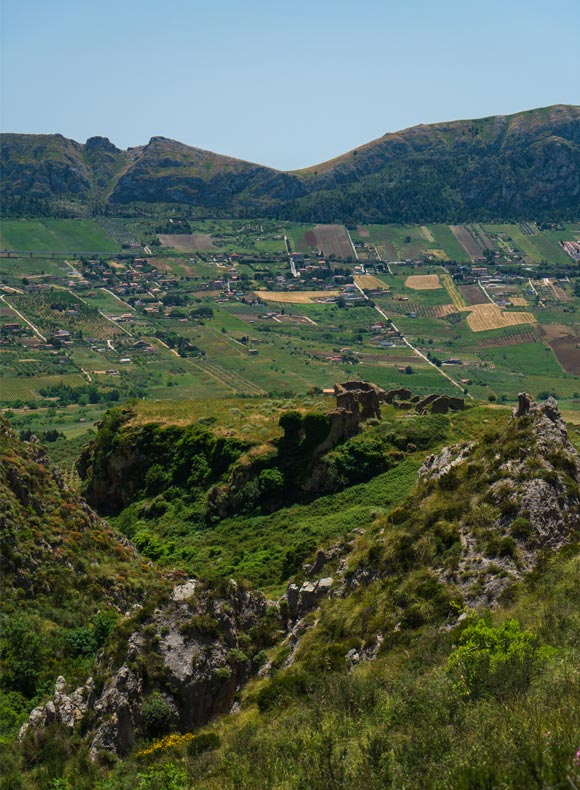 “On the way down to the village we come upon the remains of a fortress: we cannot help looking at it” 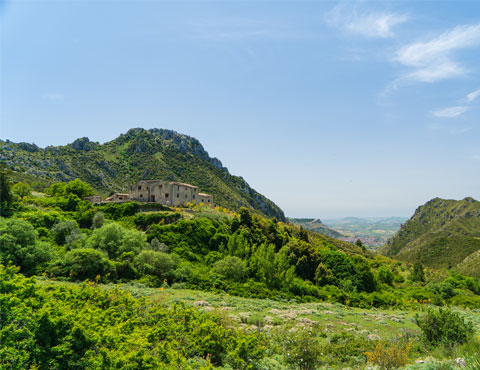