After crossing the Strait, we tackle a very short first stage (mostly urban) and climb to the former Forte di San Jachiddu, a magical place that offers us a magnificent view of Messina.

The access to the path (from the dirt road) is not easy to find and very steep; afterwards, some sections are overgrown with vegetation.

After landing in Messina, we follow the seafront northwards, passing (on the left) the chiesa di Gesù e Maria del Buon Viaggio (Church of Jesus and Mary of the Good Voyage). At a roundabout we turn into Viale Annunziata and start climbing slowly (about 100 m height difference), still on the pavement, crossing the Annunziata district; we then take a smaller road that runs alongside the Ciaramita stream, and after less than 1 km we pass through a gate (there is a ladder on the right) and turn into a dirt road that starts the second part of the climb (about 200 m height difference).

It goes uphill in comfortable serpentines with a constant gradient. At a junction (the Sentiero Italia continues on the right), we keep left to reach our destination. Shortly after, we take a path to the left that goes steeply downhill. We continue up and down, sometimes through vegetation and brambles, until we descend one last time and come to a grassy clearing lined with cork oaks. We continue on a dirt road and in a short time we reach the magnificent Forte San Jachiddu, restored thanks to the tireless passion of Father Mario.

The myth of Colapesce is found in Messina.

Among the many versions that exist (dating back to the 12th-13th centuries) the most intriguing is that Messina-born Nicola (hence Cola), the son of a fisherman, was an excellent swimmer (hence the nickname Colapesce) and that the king of Sicily, Frederick II of Swabia, having learned of his amazing abilities, put him to the test by asking him to retrieve a golden cup from the bottom of the sea outside the city (the prize, it seems, would have been the hand of the king’s daughter). But the young man never returned to the surface: legend has it that Colapesce, after descending into the depths of the sea, realised the precarious state of the column of Capo Peloro - one of the three that, according to mythology, support Sicily - and decided to stay underwater to keep the island afloat. The rumour that earthquakes occur when Colapesce changes the shoulder with which he supports the column, comes from this legend.

Among the many contemporary rewrites, Italo Calvino’s version stands out and, more recently, that of the Disney-Pixar film Luca, who seems to have been inspired by this legend when writing his material, which is set on the Ligurian Riviera.

The port of Messina, thanks to its conformation and location, has been an extremely important natural harbour for the entire Mediterranean since ancient times.

The Greeks called the city Zancle or “sickle” (because of the sickle shape of the tongue of land enclosing it), a name already used by the Siculi - according to one legend, it was the sickle of Orion that formed the port after it fell from the hands of Cronos during the battle of the Titans to free his mother Gaia from the clutches of Uranus.

Zancle, settled by the Chalcidians and Cumans, was one of the first and most important cities of Magna Graecia, renamed Messis by the Romans, hence its present name.

Until the 16th century, the port was protected by a huge chain that emanated from the statue of the Madonna (which still serves as a shelter), which Charles V had removed after an insubordination against the Habsburgs.

Of all the festivals in Messina, the most representative is the Feast of the Vara, where more than a hundred people drag the statue of Maria Assunta.

The procession, which takes place on 15 August, attracts thousands of believers every year to watch as the enormous pyramid-shaped structure on which the statue rests glides: it is more than 13 metres high and weighing about eight tonnes, adorned with numerous statues of angels, two rotating spheres symbolising the sun and the moon, and the statue of Christ that eventually supports the one of the Madonna. Two metal slides allow the Vara to move across the city, from Corso Garibaldi to Piazza Duomo, thanks to the long ropes (with a length of no less than 230 metres).

There are many tricky steps along the way (the statue is so big that it has to be manoeuvred with precision to avoid getting stuck) and depending on your skill in the tightest turns, you can draw the omens for the coming year. The tradition of the Vara dates back to 1535, to the arrival of Emperor Charles V of Habsburg.

The city of Messina has been hit by numerous earthquakes, especially those of 1783 and 1908.

The catastrophic earthquake at the beginning of the 20th century destroyed the entire city, along with Reggio Calabria, and claimed about a hundred thousand lives (to give an idea, the earthquake that struck central Italy in 2016 claimed 299 lives). The earthquake was followed by fires, explosions and a devastating tidal wave.

The city remained completely isolated due to the lack of telegraphs and news did not reach the rest of the country until the following days. The first to help the people of Messina were sailors from the Russian imperial fleet who were in the area.

The city was only rebuilt during the twenty-year fascist period in a potpourri of architectural styles that made the reborn city a centre of architectural experimentation. Art Nouveau in particular stands out, with several palaces built by the famous architect Coppedè (Palazzetto Coppedè and Palazzo Magaudda).

The jewel in the city’s crown is the Basilica Cattedrale Protometropolitana (or Duomo di Messina), located in the historic centre and elevated to the rank of basilica minor by Pope Pius XII in 1947.

Despite devastating earthquakes and subsequent collapses, the original structure, which probably dates back to the 12th century, has survived - the most serious damage was caused by World War bombing II.

The jewel of the building is undoubtedly the 90-metre high astronomical bell tower with a ten-metre high base containing a complex mechanical clock made in the 1930s by the Ungerer brothers from Strasbourg. The spectacle of the movement of the statues on the side facing the square is repeated every noon, full of allegorical representations such as the Greek figures for the days of the week, the roar of the lion and the crowing of the cock, the carousel of the four stages of life - all accompanied by the sounds of the Ave Maria by Schubert.

A regional tradition is the Opera dei Pupi, the famous Sicilian genre that tells mediaeval chivalric epics and was first seen in the 19th century.

The atmospheric heroic stories told with the characteristic colourful puppets (i pupi) have always attracted children and adults who could identify with the stereotypical characters - the good Orlando and the evil Gano. A kind of soap opera ante litteram.

The province of Messina boasts one of the most delicious gastronomic traditions in Sicily: the Granita.

What is commonly known as Sicilian granita actually originates from the province of Messina and is one of the best ways to have breakfast. The traditional flavours are coffee or lemon - mulberries in season - but it comes in all varieties. It is often (and frequently!) accompanied by cream and must be eaten with a huge brioche, characterised by a Tuppo (a kind of dome) whose dough is enriched with a little saffron that gives it a bright yellow colour.

A traditional dish from Messina is Braciole.

These are meat rolls filled with cheese (caciocavallo or provolone), breadcrumbs and parsley. They are made of slices of veal and are cooked over charcoal or on the grill.

Another typical local dish is Falsomagro: a slice of beef rolled and filled with minced meat (mortadella, bacon, lard), boiled eggs and caciocavallo cheese - the recipe can vary from region to region.

The roll, whose name says it all, is tied together and fried in a pan with sautéed carrots, onions and celery, with tomato sauce added.

An iconic dessert of Messina is the Pignolata, a variation of a dessert common throughout southern Italy (in Campania they are called Struffoli).

In this case, the small fried dumplings are not spread with the classic honey, but with a black cocoa glaze and a white lemon flavoured glaze that gives the dessert its characteristic creamy colour. Typical of the carnival season, it can now be found all year round - even on the Calabrian side, where there is a bergamot or lemon flavoured version.

The cake probably dates back to the Spanish era and was the poor man's remedy for the festive days.

Focaccia Messinese is the city’s street food, filled with escarole, chopped tomatoes, tuma (goat cheese) and anchovies. The recipe dates back to the mid-20th century and has become a symbol of the city over the years. It is made in large rectangular baking tins with a high, soft dough.

The same ingredients of focaccia (anchovies, tuma, tomatoes and escarole) are also found in the Pitone, a classic Mexican rotisserie dish, a type of stuffed calzone that is traditionally deep fried. Some trace the name back to the Greeks because it resembles the famous flatbread called pita, others derive it from the dialect word for foot, which is close to the classic Italian version of the calzone.

Forte San Jachiddu, in Messina (the fortress is a public place not used for accommodation, but it is possible to spend the night there if you ask Father Mario’s permission, provided you have a mattress and sleeping bag). Tel. +39349 802 1849

The starting point can be reached by bus

The starting point can be reached by train. 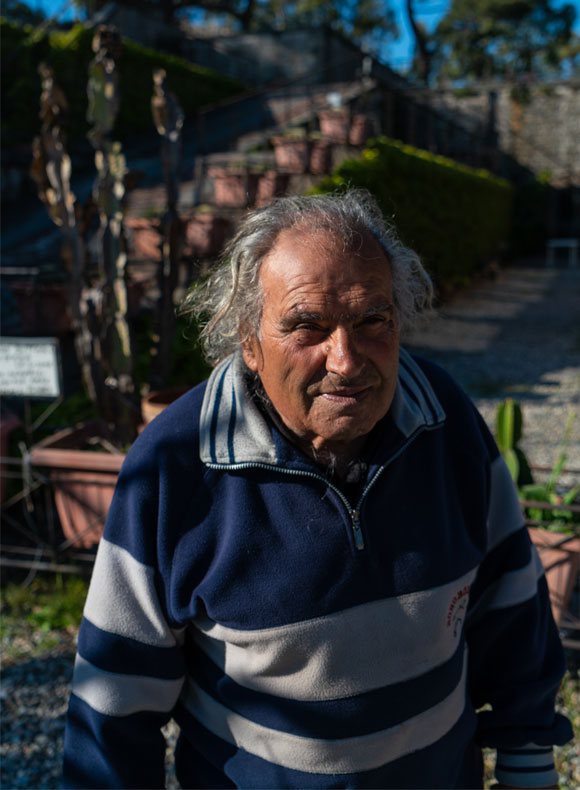 “In San Jachiddu we are received by Mario, the elderly missionary who has breathed life back into the abandoned fortress” 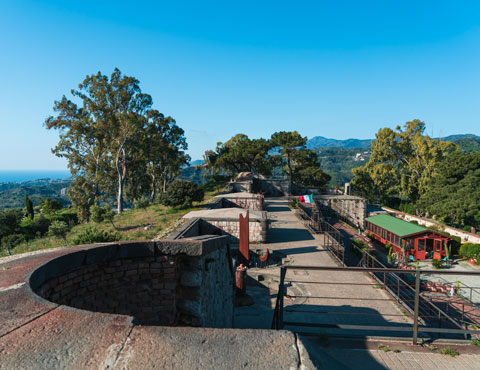