A stage of good length and with a considerable positive difference in height that leads us to the foot of the northern side of the Gran Sasso. The highlights of the day are the view of Monte Corvo (2,623 m) from the Rifugio del Monte and the arrival in the picturesque village of Pietracamela, one of the most beautiful in Italy.

The track is sometimes covered by invasive plants, it is necessary to keep an eye on the trail signs (when present) and to monitor the GPS track.

During the climb from Prato Selva to Colle dell'Abetone, in some places, it is necessary to guess the track on the ground without it being actually marked.

The last stretch of the descent towards the Rio Arno Valley has a bumpy and insidious surface, be careful.

The only water point is at the Rifugio del Monte, about halfway through.

We leave Nerito and begin the long climb towards Colle San Pietro (about 1,000 m height difference). The first part is on a comfortable road on a slight slope, along the Rocchetta stream; then we take the wide path on the left and the slope increases, albeit without difficulty. After a few kilometers in the woods, we come out on the asphalted road that we follow to the right, soon reaching Prato Selva (1,368 m), with a condemned mountain lodge and an abandoned ski lift.

We resume the path, directing south, and gradually ascend paying close attention to the trail markers. Reached the road, near a pylon of the ski lift, we turn right and shortly afterwards we enter the woods. We follow intuitively a path on the ground (no signposts) that climbs quite steeply until we reach a new carriage road, which we take to the right bypassing Colle dell'Abetone from the west until we reach a large meadow. After passing it, a last steep climb awaits us and right after,  we reach Colle San Pietro (1,806 m, great view over the Gran Sasso group).

We begin the descent (approximately 600 m height difference), mostly in the woods. After 1 km, we reach the clearing of the Rifugio del Monte (now condemned). To the south stands Monte Corvo (2,623 m). We continue with an easy descent in the woods and we reach the valley floor; we follow a road to the left, then we resume the path on the right climbing sharply (approximately 200 m height difference) to the Prati Cantiere and, shortly after, to Colle dell' Asino (1,472 m).

A last descent (about 200 m drop, a little bumpy) leads us to the bridge over the Rio Arno, after which we skirt the stream on an easy carriage road until we reach the charming village of Pietracamela, one of the most beautiful in Italy.

The suggestive village of Pietracamela is located at 1,005 m of altitude. In the past, upstream and downstream of the present town, there were three villages (Plicanti, Riouso and San Leucio) of which only a few remains survived.

The origin of the name Pietracamela is still unclear: regarding the first part, there is no doubt that it indicates the rock that distinguishes the town, while camela  seems to derive from the ancient Cimmerian population. Today the camel has entered the municipal coat of arms (perhaps to replace a sheep) and if you ask around why, they will simply answer: "the rocks at the top of the village resemble the humps of a camel ...".

Pietracamela was among the Abruzzo centers known for the presence of carders, an ancient craft linked to the production of wool (carding consists in cleaning the wool from impurities, untangling the textile fibers, to allow subsequent spinning operations). These workers practiced their art both in the neighboring regions and in the more distant ones.

The Scuola degli Aquilotti was born between rocky sides of Pietracamela: a mountaineering school founded in 1925 by the doctor Ernesto Sivitilli. The school, which still exists, has opened many routes, not only on the nearby Gran Sasso, but also on the Himalayas.

In the Grotte di Segaturo, in the upper part of Pietracamela, you can admire the rock paintings of Guido Montauti: born in 1918 in Pietracamela, he is an internationally famous painter.

After a Parisian experience, he returned to his homeland and founded the painting group Pastore bianco, together with other painters and a shepherd. The group chose the figure (the man, the rock, the tree, the house), as center of its painting in opposition to what was the "maddening modernism of pop-art".

The timballo di scrippelle is a sort of lasagna (less moist) made up of overlapping layers of scrippelle (a kind of crepes), typically stuffed with sauce with pallottine (small mixed meat meatballs), or plain, with bechamel, mushrooms, ham and peas.

Recipes vary from family to family.

The pizza dogge is a classic dessert from Teramo. Very similar to a zuppa inglese, it consists of layers of sponge cake (some of them soaked in alchermes liqueur) alternated with custard and cocoa cream.

In Pietracamela there are several accommodation facilities.

Starting point reachable by bus from the city of Teramo. 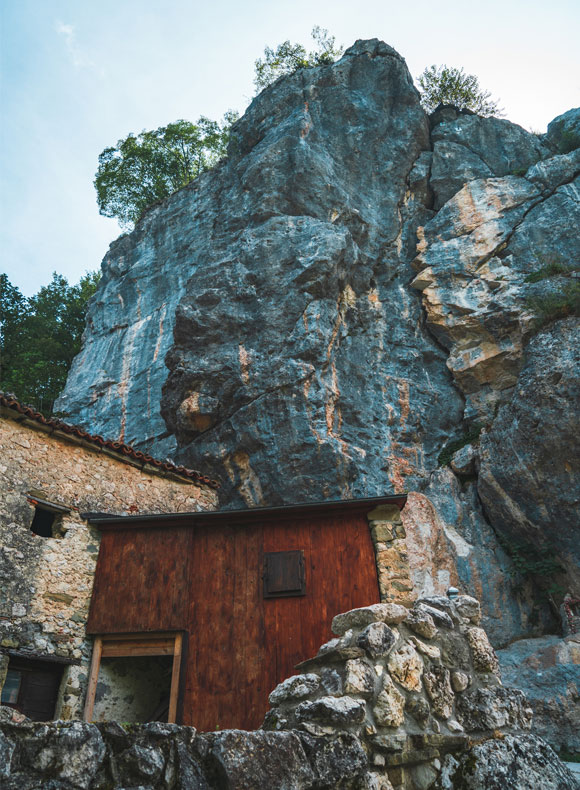 “Entering Pietracamela, we have the impression of leaving any time dimension” 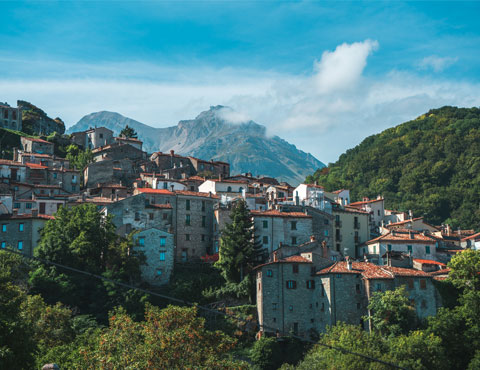