A stage as much tiring as...legendary! With a very challenging height difference, we climb the first summit of the continental Apennines, the Corno Grande delGran Sasso d'Italia (2,912 m), enjoying a truly unique stone landscape - of Dolomite memory.

The route represents a variation of the Sentiero Italia (which reaches the Duca degli Abruzzi following the Rio Arno Valley), preferred for the Gran Sasso peak’s beauty, the highest in the continental Apennines.

The stage, although of medium length, has a considerable difference in height and requires adequate physical preparation.

The ascent to the Corno Grande presents difficulties suitable only for experts: some sections are exposed and equipped with chains, the slope is important and the surface is often gravelly and slippery; some parts require the use of hands.

Given the large number of people (as well as the total absence of shade from Prati di Tivo onwards), it is recommended to leave before dawn.

The only water points are just above Prati di Tivo and Rifugio Franchetti.

We leave Pietracamela in the dark and take the path that goes up (about 400 m height difference) towards Prati di Tivo, mainly in the woods on a good track. Once at the ski resort, we start the climb (approximately 1,450 m height difference) to Corno Grande. The first section runs alongside the ski lifts, on a good path on a grassy ground, until it reaches the Madonnina, on the north-eastern crest of the Gran Sasso.

The path continues sideways entering the Valle delle Cornacchie on a constant slope, on an excellent track; some chains help the journey. After the Rifugio Franchetti (2,433 m) we continue the ascent to the Sella dei Due Corni (2,547 m), suspended between the Corno Grande and the vertical pinnacles that precede the Corno Piccolo (2,655 m).

We bend to the left and, on an increasingly gravelly ground, we reach the Passo del Cannone (2,679 m) from where we take the path to the right (although the trail markers go also to the left). The difficulties of the climb begin, between slightly exposed sections and passages on rock that require the use of hands. After a cross path, we spot the Via Normale and we take it without losing altitude. The climb continues with a significant slope between stone channels and debris, until you reach a pass overlooking the Ghiacciaio del Calderone (or what remains of it). We bend to the right and, remaining just below the ridge, we reach the top of Corno Grande (2,912 m), the highest peak of the continental Apennines: the magnificent view stretches from the Adriatic coast to all the peaks of the Gran Sasso massif, up to the Majella.

We begin the long descent (approximately 800 m drop) along the Via Normale, paying attention to unstable stones; once past the western shoulder of the mountain, the path returns to a good surface and the technical difficulties disappear. After a ramp, the path flattens out and walking along the hillside, we arrive effortlessly at the Sella dell'Aquila (2,335 m, the view of Campo Imperatore and the alpine forms of Monte Brancastello, 2,385 m, is beautiful) , from where through an easy path, we barely go up the ridge in front of us, reaching the famous Rifugio Duca degli Abruzzi (2,388 m).

The Gran Sasso (2,912m) is the highest mountain in the Apennine chain, excluding the islands and therefore the Etna volcano (3,326m). For the Romans, it was Monte Ombelico (Fiscellus Mons) (Mount Navel) due to its centrality within the peninsula; subsequently it was called Monte Corno, a name that has remained in use for a long time and continues to indicate the most significant peaks (Corno Grande and Corno Piccolo). Only in the Renaissance period it began to be called Sasso d'Italia or Gran Sasso d'Italia.

The massif is characterized by two very distinct faces: to the west, the L'Aquila side is mainly composed of steep meadows; to the east, the Teramo side is characterized by high rocky walls. On the Gran Sasso there is the Ghiacciaio del Calderone, located in the basin north of the Corno Grande. In addition to representing the southernmost glacier in Europe, it is a real climatic rarity, as it is located below 3,000 m.

Inside the mountain, at a depth of 1,400 meters, there are the Laboratori Nazionali del Gran Sasso. Commissioned in 1979 by Professor Antonino Zichichi, then president of the National Institute of Nuclear Physics, they are among the world’s most important nuclear physics laboratories. Since 1987, research has been carried out on the smallest particles in the universe: the 1400 meters of overlying rock reduce greatly the influence of cosmic rays, allowing a condition of "cosmic silence", perfect for studying particle physics.

The first ascent of Corno Grande took place in 1573 by Francesco De Marchi, an ante-litteram mountaineer, explorer and speleologist. An eclectic figure, he dedicated himself to the most varied undertakings, including diving into Lake Nemi with a sort of self-built diving suit and the inspection of the Grotta a Male under the Gran Sasso, where it is is still preserved the cross that marked his passage.

He made the ascent to Corno Grande at the age of 69, accompanied by some chamois hunters from Assergi, thus fulfilling the desire of a lifetime.

Campo Imperatore is so called because it was the Imperial Field of Frederick II of Swabia.

It underwent constant deforestation starting from 1500, to encourage pastoralism. With its 18 square kilometers, it is the largest plateau in Italy: it was also called Little Tibet by the famous writer and mountaineer Fosco Maraini.

Its unique settings have been the set of many films, including the famous spaghetti westerns.

The presence of the Apennine chamois on the Gran Sasso is testified by numerous literary writings since Roman times. It was hunted with daring methods especially in the small community of Assergi, for the skin and meat. The advent of increasingly effective firearms has now led to its almost total disappearance.

During the Giro d'Italia in 1999, Marco Pantani won the Campo Imperatore stage, leaving an indelible memory to the people who were waiting for him at the finish line. Since then, the last part of the stage has been called "Salita Pantani".

Looking down from the Rifugio Duca degli Abruzzi, you can see a huge orange structure, a hotel that is no longer in use: the Hotel Campo Imperatore.

There, Benito Mussolini was held prisoner, following the session of the Grand Council of 25 July 1943. On September 12, 1943, the former dictator was freed from a blitz by Nazi paratroopers with the controversial Gran Sasso raid.

The Ristoro Mucciante has been active in the Fonte Vetica area for over fifty years.

Located inside an old building used to shoot one of the many spaghetti westerns, you can taste several Abruzzo specialties: cold cuts, sausages, cheeses, fresh meat… and of course the unmissable arrosticini.

Outside there are braziers on which meat purchased from the kiosk can be cooked. A unique experience!

Departure point reachable by bus, starting from the city of Teramo with a change in Montorio. 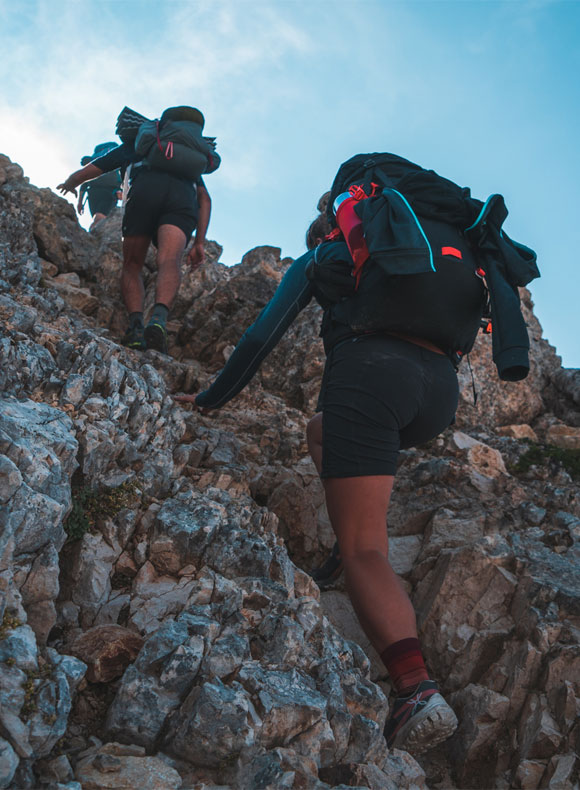 “We stick a sticker on the iron cross and we embrace each other euphorically: we are on the highest point of the Apennines, at 2,912 meters” 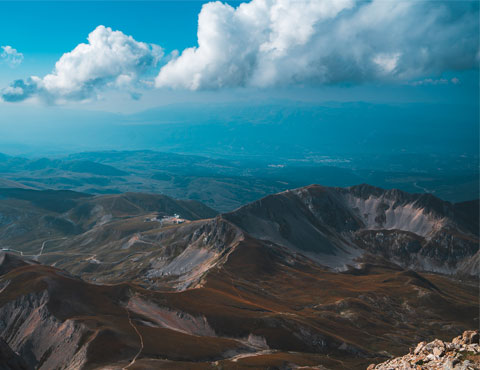