We leave the center of Norcia with a medium-length stage, mostly uphill, but without sudden climbs and difficulties.

The summit of Monte Patino and, even more, the view of the Pian Grande from the wonderful village of Castelluccio di Norcia (unfortunately devastated by the 2016 earthquake) are unforgettable moments.

Even without difficulties, the climb is long and the difference in height is quite significant; it should not be underestimated if you are a beginner.

Despite the simplicity of the paths, the signage is rather scarce; good to keep an eye on the GPS track.

The only water point is at Fonte Patino, at the end of the climb.

We leave Norcia on an asphalted road, starting immediately the long, slow climb (approx. 1,200 m height difference) towards Monte Patino. After a couple of km, we take the road on the left and pass some houses; then, leaving the detour to Casa Fausti on the left, we take the wide path, mostly in the woods, which goes into the Patino Valley.

Except for brief moments, the slope is always acceptable and you can walk pleasantly.

After a decisive reversal of direction northwards, we gradually leave the woods and continue to the Fonte di Patino, the only water point of the stage. With another change of direction, moving sideways to climb, we finally reach the top of a plateau. If we still have some energy left, we deviate west to reach the summit of Monte Patino (1,883 m) on an easy ridge (with some ups and downs), which offers a priceless view of Norcia and of a large part of the Umbrian-Marchigiano Apennines: Monte Vettore massif dominates towards the east (2,476 m).

Back on the plateau, we begin the descent (approximately 300 m drop) towards Castelluccio di Norcia. We cross Coste I Valloni and return to a forest of young birch trees, then we reach the road and in front of us opens up the view of Pian Grande, famous for the flowering of lentils in the month of July. We turn left and shortly after, we are in the small perched village; many houses no longer exist after the 2016 earthquake.

The small town of Castelluccio, a hamlet of Norcia, is located on a hill that rises on the edge of the homonymous plateau, one of the largest in Italy. The village, of medieval origins, was almost completely destroyed by the earthquakes of 2016 (in particular, the Church of the Assumption collapsed, together with the bell tower): the force of the seismic swarm even lowered the ground near the village of 70 cm!

Some curiosities: it seems that until the '70s there was no electricity in the village and the square was used as a stable for the horses that crossed the plateau. Furthermore, in the winter of 2005, the temperature in the village, whose climate is characterized by strong temperature variations, dropped to -32 °, one of the lowest ever recorded in Italy.

The Castelluccio plateau is made up of Pian Grande, Pian Piccolo and Pian Perduto; it covers an area of 15 sq km and is the second largest in Italy after Campo Imperatore. The plateau, located about 1,300 m above see level, originated about a million years ago as a great depression in which a lake was formed that dried up over time, due to the numerous karst phenomena (pits, sinkholes, ponors) present in the area.

Thanks to the updrafts, the area, popular among tourists, is renowned for the flights with hang gliding and paragliding.

In the period between May and July, you can admire the famous flowering of the Pian Grande (called "Fiorita"), whose beginning and duration vary according to the climate and, above all, the rains. The colors of the flowers of the lentils are joined by those of countless poppies, cornflowers, daisies and others, creating a gigantic, magical palette. Thousands of tourists reach the Piani di Castelluccio every year to attend the show.

The Bosco Italia, on the Pian Grande near Castelluccio, is a huge coniferous forest in the shape of Italy. It was created in 1961 for the 10th Mountain Festival and to celebrate the first centenary of the Unification of Italy. It was wanted by the then Minister of Agriculture Mariano Rumor.

The most famous product is certainly the Castelluccio lentil. Small in size and with a thin skin, it allows cooking without prior soaking. The product has been under the Protected Geographical Indication protection since 1997.

The characteristic polychromy (from yellow, to green, to red) and the rich taste make it a unique product, and the high protein value has made them famous as the "meat of the poor". Traditionally they are served stewed, cooked with celery, carrot, onion and tomato.

Right after the Agriturismo La Valle delle Aquile, on the left, we find a road that leads, in about 2 km, to a free camping area in Valle Canatra; there is a source of water.

Starting point reachable by bus from the city of Spoleto. 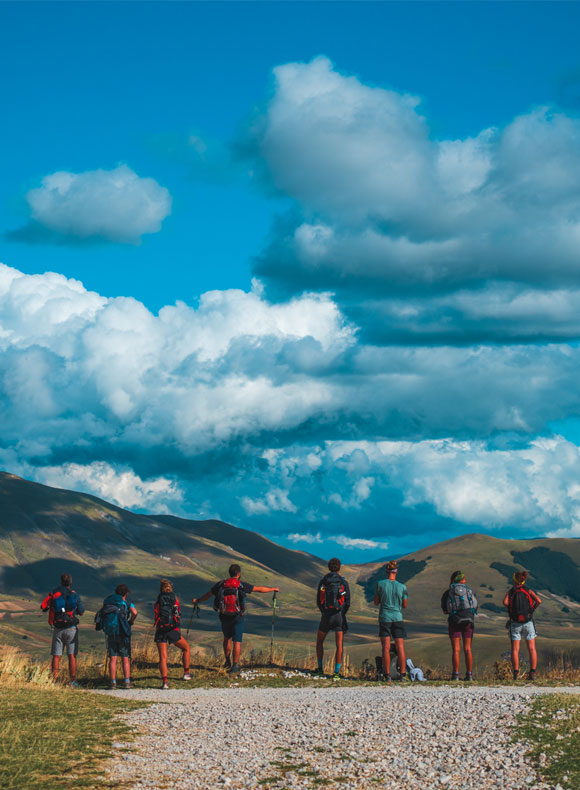 “The sight of Castelluccio saddens our hearts; very little of that magical ancient village has remained since the earthquake” 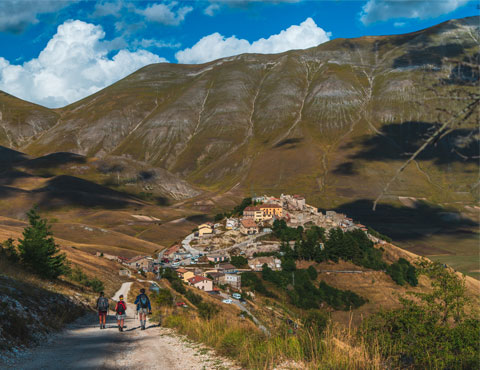