A stage of good length, nonetheless easy and smooth, without sudden climbs. The sweetness of the landscape contrasts with the destruction of the small villages devastated by the earthquake, including the (beautiful) one of Norcia.

In the second half of the route, from Campi Vecchio onwards, you cross several villages destroyed by the earthquake, unsafe and still full of rubble: you need to be careful and move quickly to minimize the risk of sudden collapses.

The only water point is in Capo del Colle.

We leave Visso on the cycle path, along the small stream, which soon returns to the paved road. It begins the long and easy climb (approximately 600 m height difference) towards Colle dell'Acquaro, along the entire Valle di Visso: the road makes way to a road suitable for vehicles built right after the earthquake to connect Norcia and Visso.

Where the wood opens up, we can admire the soft landscape of Monte Merigone and Monte Cavolese. Once at the Colle dell'Acquaro (1,200 m), instead of continuing on the road towards Campi Vecchio, we take a good path on the left side; we cross Monte Macchialunga (1,273 m) and then descend (400 m drop approx.) the eastern side to the built-up area of Campi.

We walk on the road towards Campi Vecchio (going up for about 100 m height difference) and then continue on the hillside road through some destroyed villages (Capo del Colle, Piè la Rocca), with rubble that invades the streets. After Piè la Rocca, we proceed on the road and head towards Forca d'Ancarano; from the pass (1,008 m), we descend easily (ca. 400 m drop) towards the beautiful fortified village of Norcia.

Located between the Val Nera and the Sibillini mountains, Norcia is the city that gave birth to Saint Benedict and his sister, Saint Scolastica, at the end of the 5th century AD. Saint Benedict of Nursia, proclaimed patron of the whole of Europe in 1964, is the founder of Western monasticism, and he is responsible for the famous rule ora et labora, the inspiration of the life in Benedictine monasteries.

The city of Norcia was probably built by the Sabines on previous Umbrian and Etruscan prehistoric settlements. Its name derives from the Etruscan divinity Northia, assimilated to the Roman goddess of luck and fate; at the beginning of each new year, as a good luck ritual dedicated to the goddess, a nail was driven into the wall of the temple, a custom that was perhaps also used to count the years.

Unfortunately, the city of Norcia has suffered frequent and disastrous earthquakes over the centuries: that of 1328 caused about 5,000 victims and the collapse of most of the buildings, in the 18th and 19th centuries other earthquakes upset the urban layout, while the earthquakes in 1979 and in 2016 left wounds that are stil open.

The repeated reconstructions have largely erased the medieval style of the city, which today has a 19th-century structure. In the historic center, characteristic are the low buildings with reinforced perimeter walls, according to the rules of pontifical legislation after the earthquake of 1859 (which caused the collapse of 600 buildings out of the existing 676).

In the central square of Norcia, the artistic symbol of the city, can be found the Town Hall, the Basilica of Saint Benedict (built on the birthplace of the saint), and the Castellina, a Renaissance fortress that houses the Civic and Diocesan Museum.

Unfortunately, the seismic events of 2016 destroyed both the Town Hall and the Basilica of Saint Benedict - its bell tower collapsed, destroying the nave. Pending reconstruction, the only building in the square to stand still is the imposing Castellina, a solid four-sided fortress used as a military garrison by the Church since the 16th century; from the building, a secret underground passage leads to the outside of the walls, allowing quick escapes in case of need.

Walking around the medieval walls (heart-shaped!), you can admire the beautiful 7 gates of Norcia, each of which corresponds to a district. For some of them, the name indicates the direction of the roads that cross them (Porta Romana, Porta Ascolana, Porta Patino).

In the 9th century, Norcia went through a period of deep depression and was almost totally abandoned. In the Nursian plain, people survived thanks to self-sufficient agriculture. At the same time, pig breeding became more and more important, as its processed meat could be sold in neighboring villages, becoming a mean of sustenance and exchange (the skill of the nursini breeders, the empirical knowledge and surgical practices carried out on pigs merged with the anatomical knowledge of the Benedictine monks, giving rise to the birth of a School of Surgery, officially recognized by the Church, which allowed a small group of local people to perform surgeries, practiced only by monks until that moment).

Over the years, it developed the norcineria, the local art of pork processing, which still today produces excellent products, sausages and others, known and appreciated everywhere. The most famous is certainly the Prosciutto di Norcia, produced with Protected Geographical Indication since 1998, and characterized by a pear shape and a not too salty flavor, enriched with herbs and spices, in particular pepper.

In addition to sausages, Norcia is famous for its black truffle and the production of chocolate.

In Norcia there are several accommodation facilities.

Departure point reachable by bus, starting from the city of Civitanova Marche with a change in Macerata. 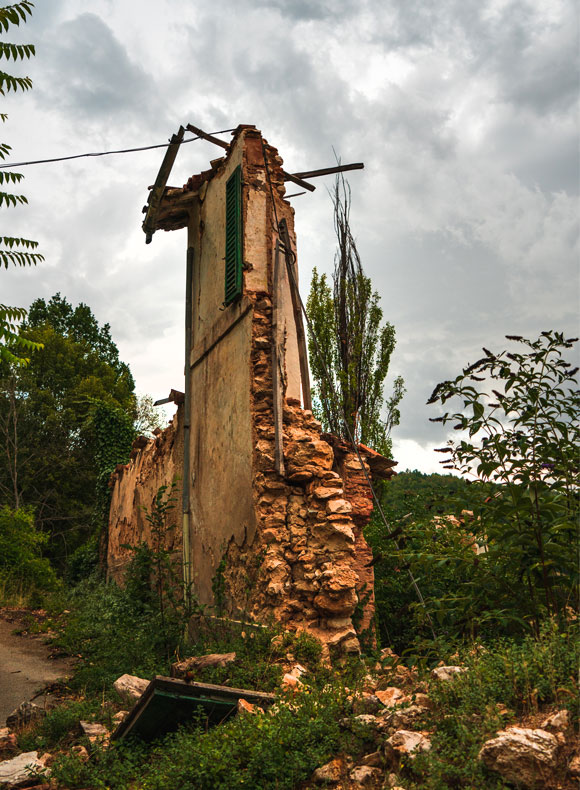 “We walk through the rubble of the earthquake, the silence is broken only by the flaping of a shutter in the wind” 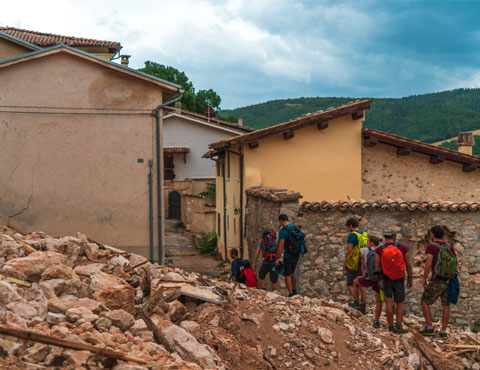