We cross the fascinating Area Marina Protetta e Riserva Naturale di Torre Guaceto, with its bays of crystal clear water; afterward, we walk on a very monotonous provincial road, often ruined by the presence of garbage, until we arrive in the large port city of Brindisi.

As soon as you leave the Riserva di Torre Guaceto, there are garbage and open landfills everywhere.

Poor and barely visible signage (both of the Cammino Materano and of the Via Francigena): it is better to monitor the GPS track.

Long stretches on asphalt, partly on a fairly busy road: be very careful.

We leave the Penna Grossa lake to arrive at the Penna Grossa beach; we continue walking on the sand or along paths in the flora of the reserve for about 2 km, until we reach the beautiful promontory of Torre Guaceto. From here, we turn right and continue south-west for a few hundred meters, until we reach the state road which, turning left, we skirt for a few kilometers, changing sides of the carriageway a couple of times.

Afterward, we turn left and head towards the coast; once in the locality of Posticeddu, we start walking on the coastal road and follow it for about a dozen kilometers, until we approach Brindisi, keeping the airport constantly on the right, until we reach the Monumento al Marinaio d'Italia - an ideal spot to admire, on the other side, the Roman columns that marked the end of the Via Appia.

The Via Francigena del Sud, which we are traveling on, is an additional branch of the well-known medieval pilgrimage route that connected Canterbury to Rome.

The Francigena is part of the many Roman roads that led to the Eternal City: together with Santiago de Compostela and Jerusalem, Rome (city of St. Peter and the papacy) was one of the pilgrimage destinations of the European Christianity. Among those who reached Rome to visit St. Peter's tomb, many continued their journey to Jerusalem passing through the ancient Roman roads (the via Appia and the via Traiana) towards Puglia to then embark in the port of Brindisi.

In recent decades, the ancient pilgrimage routes have become a reference point for hikers from all over the world; the European Union has activated numerous projects to enhance them, recognizing these paths as one of the founding components of the idea of Europe.

The history of Brindisi is closely linked to that of its port.

Already in the Messapian age, it was used as a natural port and it seems that the particular conformation of the gulf, which recalls the antler of a deer, gave Brindisi its name: from the Messapian Brention, translated as “deer head”. The port inlet is divided into three areas: external, intermediate and internal. The external part is characterized by the presence of two islands, the intermediate part is formed by a large basin, while the internal part is characterized by two arms called seno di ponente and seno di levante.

Brindisi has always been a gateway to the East and since the Messapian era, there have been numerous trades in the Adriatic and towards the Aegean Sea. In Roman times, its position favored the development of the city making it a reference point for the whole Mediterranean: the amphorae made in Brindisi have been found everywhere. In medieval times, it was the port from which the Crusades left for the Holy Land: the sixth was particularly ill-fated, organized by Frederick II (who particularly loved the city), as the enormous crowd of people who poured into the city facilitated the spread of a terrible epidemic.

With the opening of the Suez canal, Brindisi became one of the landing ports of the Indian Mail (the route that connected London to Bombay) and its importance was also narrated in the book-masterpiece by Jules Verne, Around the world in 80 days. After alternating historical phases (it was the capital of the Kingdom of Italy for five months between 1943 and 1944), today the port of Brindisi remains of extreme importance both from a touristic (towards the Balkans, Greece and Turkey) and commercial (coal, fuel oil and natural gas) point of view.

In Roman times, the Eternal City was connected with Brindisi through the Via Appia, one of the main trade routes of the ancient Italy.

Commissioned by Appius Claudius Caecus to speed up the travels in southern Italy and to consolidate the Roman dominion, it was built between the 4th and 3rd centuries BC and it is one of the most important civil engineering works of that Roman period, from a commercial, military and technological point of view. They used the most advanced technological knowledge - for example the gravel pavement which, favoring drainage, allowed traffic in any weather condition. The important route, together with the Via Traiana, was also widely used during the medieval period, in particular during the Crusades.

When humanitarian crises arise around the world, caused by wars or natural disasters, governments and NGOs can turn to the United Nations Emergency Response Bases (UNHRD). The first of these bases was established in Brindisi in 2000.

If in the eastern part, it is the port area that characterizes the city, in the north it is the Salento airport that does so, occupying a large part of the city territory. Built in the 1920s as a military airport, it maintained this status until 2008, when it was also opened to civilian flights.

The military tradition of Brindisi has an ancient history that continues in the ancient structures: significant is the presence of the command of the Italian Navy inside the Swabian Castle, which was one of the most important castles of the defensive system wanted by Frederick II of Puglia. It is also called a land castle to distinguish it from the Alfonsino castle located on the island of Sant'Andrea, at the entrance to the harbor inlet, used as a military structure until 1984.

Just outside the city, an American airbase was active throughout the 20th century; during the war in the Balkans, NATO military aircraft departed from here. During and after that period, the city stood out for the great solidarity offered by its citizens to the refugees.

There are numerous interesting churches in the city. Among them, we want to point out the Romanesque church of San Giovanni al Sepolcro, with a circular plan and interiors decorated with frescoes (dating back to the 12th century, now closed to worship); the cathedral of San Giovanni Battista, located between the remains of the Roman walls and the sea, also built in the 12th century, with a huge bell tower. Just outside the town there is the church of Santa Maria del Casale where you can admire the 14th-century frescoes - the facade is enriched with bands of ornamental designs made up of two-colored stones.

One of the symbols of the city is the Roman columns, located in the middle of the two canals that branch into the inner port and for a long time (erroneously) associated with the construction of the Via Appia. Probably built between the 2nd and 3rd century AD, given the central position with respect to the entrance to the port and with the task of greeting those who entered the city from the sea, they were the basis of two huge bronze statues. The history of the columns is not limited to their celebratory purpose: the Roman poet Virgil died under the staircase, returning from a trip to Greece; moreover, one of the two columns, collapsed in 1528, was given to the city of Lecce.

Some argue that the column with the lion of San Marco on top in Piazza San Marco in Venice is a reproduction of the Brindisi columns.

Since November 1933, another work welcomes sailors who enter the city: the Monumento al Marinaio, built during the Fascism time to commemorate the 6,000 sailors who died during the First World War.

Shaped like a rudder, covered with carparo stone, 53 meters high, the structure was designed by Luigi Brunatti. After the Second World War, the fasces on the sides were removed.

The Museo Archeologico Provinciale Francesco Ribezzo was founded at the end of the 19th century and hosts the finds of the Messapian civilization found in the Brindisi area and in the depths of the province; there are also remains of the Roman and medieval times.

Since 1992, above all, the collection has been enriched by the Serrone Bronzes, found in the marine stretch in front of Punta del Serrone; they represent a splendid example of the art of the imperial Roman age. The entrance to the museum is adorned by the so-called portico of the Templars, consisting of two gothic carparo arches.

A typical product of Brindisi is the ricotta forte, a spreadable cream obtained from the fermentation of ricotta. The name indicates its strong flavor which becomes slightly spicy.

It is used in many ways: in the sauce for pasta, in the filling for panzerotti - it is excellent spread on bruschetta with salted anchovies.

The vine of Greek origin, whose name is a contraction of the Byzantine stronghold of Monemvasia, is widespread throughout the Mediterranean and throughout Italy, where it is usually vinified in white. The Malvasia Nera of Brindisi, ruby red in color with violet reflections, is also used for the production of rosé wines.

In Cannobio there are numerous accommodation facilities For information and help, ask Fabio Mitrotti. Tel. +39 347 822 7836

The nearest town that can be reached by bus is Carovigno, starting from the city of Brindisi.

The nearest place that can be reached by train is Carovigno, starting from the city of Brindisi. 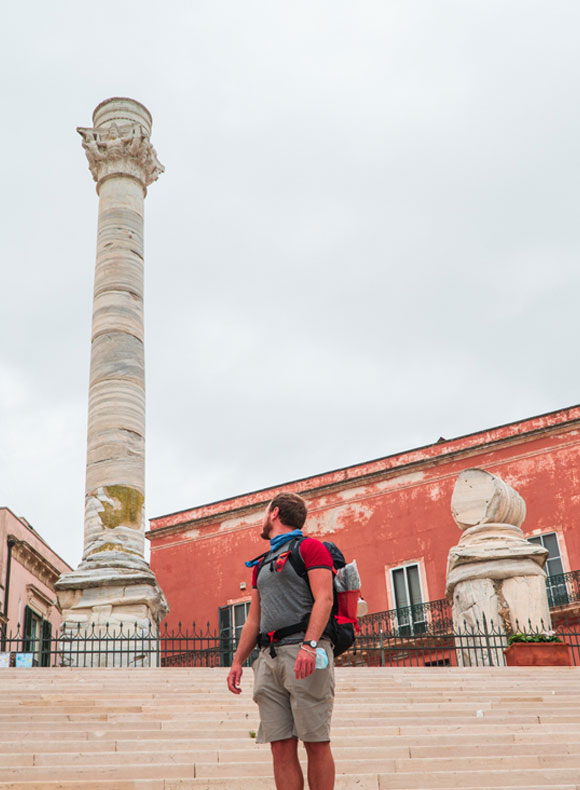 “The smell of the sea accompanies us throughout the day” 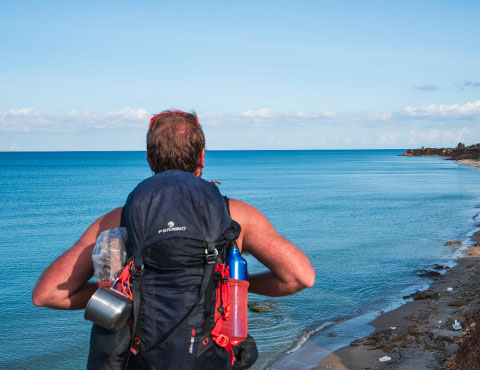