A medium-length stage along the Cammino del Salento, quite simple.

The route, mainly on the coast and very scenic, has several points where you can take a swim in spectacular coves.

The only water point is in Porto Badisco.

We leave Otranto and, through a breathtaking coastal hike, we reach the Torre del Serpe, then the small Lago Rosso (a former bauxite quarry). After passing the quarries, after about 2 km, we meet the asphalted road and pass by the Faro Palascìa (the easternmost point of Italy). We come to a descent and, keeping to the left, we return towards the coast crossing a plain reminding us of Irish landscapes: in the distance stands Torre Sant'Emiliano, which we reach following the path.

After 2 km, we arrive in Porto Badisco, an excellent point for a refreshing swim (where, according to Virgil's Aeneid, Aeneas landed on the run from Troy). From the sand, on the left side, you can see a singular phenomenon: a source of fresh water starts a small stream, a few meters long, which ends up in the sea a few meters later (it is one of the last branches of the underground river where the waters of the Valle dei Cervi convey).

Through paths, immersed in the plain, between empty farmhouses, endless meadows and abandoned eco monsters, we finally arrive at Santa Cesarea Terme, where we can admire the Chiesa Madre del Sacro Cuore and the Hebrew writings on the facade of the Porta d'Oriente and Palazzo Sticchi. Not to be missed the beautiful bay of Porto Miggiano.

The town of Santa Cesarea Terme was founded in the last years of the 19th century, thanks to the presence of the precious thermal waters. Legend has it that the sulfurous waters developed from the putrefaction of the giants Leuterni, killed by Hercules; the Christian version instead wants them to be created from the flames that saved the girl Caesarea from the folly of her father.

The thermal waters flow in 4 natural caves, whose names are not very imaginative: Gattulla, Fetida, Sulfurea and Solfatara. The spa, inaugurated in 1910, draws water from the caves and originated the village, which has become a well-known tourist town.

Not far from Santa Cesarea Terme, in the locality of Porto Badisco, there is the Grotta dei Cervi, with more than 3,000 cave paintings, called the Sistine Chapel of Prehistory.

Discovered in February 1970, with its 2 km of tunnels and chambers it represents one of the most important painting complexes of the Neolithic. The pictograms (3000 - 4000 BC) were made with red ocher and bat guano; you can see children's hands, hunting scenes including that of deer (hence the name), and many abstract symbols.

The best-known pictogram is the dancing God, the symbol of the cave (currently not open to preserve the precious paintings).

Just outside Otranto, there is a small heart-shaped lake, the Lago Rosso, in the middle of the red rocks of an old bauxite quarry: in the past (from the Second World War to the 70s) the mineral was extracted and then sent to Marghera for the aluminum production.

Those arriving in Santa Cesarea Terme are immediately struck by the majesty of Villa Sticchi, built in the late 19th century in Moorish style not far from the sea.

With its Arabic style and its thousand colors, it symbolizes a meeting point with the Near East: Carmelo Bene used it as the opening of the film Nostra signora dei Turchi to remember the hybrid past of these places. The building is characterized by a large purple-red dome and four corner towers; the walls are covered with pictorial decorations made of arabesque and floral motifs.

The whole Apulian coast is dotted with towers, used as lighthouses or sighting and signaling points especially in the period of the Saracen raids: they were Puglia’s eyes towards the Mediterranean.

In the territory of Santa Cesarea Terme there are five of them in visual communication with each other.

The rustico leccese is one of the typical products of Salento: you can taste it in any bar and eat it while walking.

It is a disc of puff pastry filled with bechamel, mozzarella and tomato and it is served hot ... be careful not to burn yourself!

Starting point reachable by bus from the city of Lecce.

Starting point reachable by train from the city of Lecce. 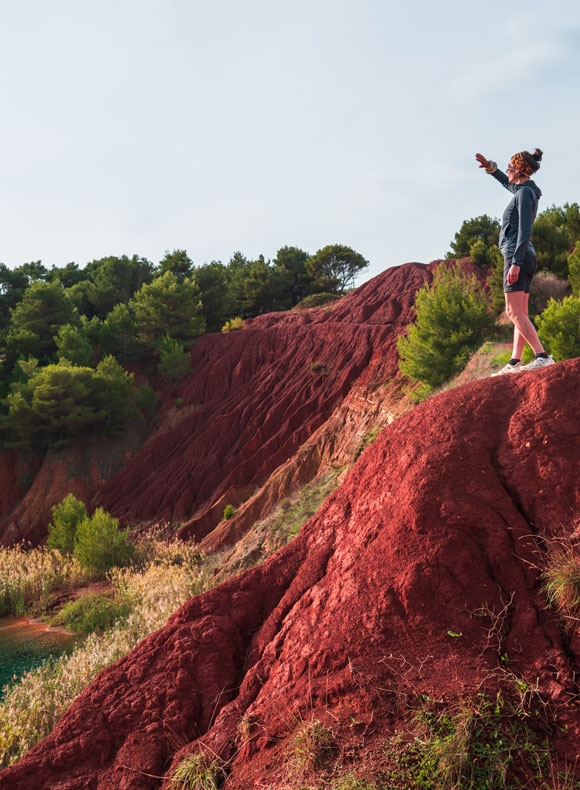 “We wait for the sunrise in Faro Palascia, the easternmost point of Italy. Today we are the first in Italy to see the sun rise” 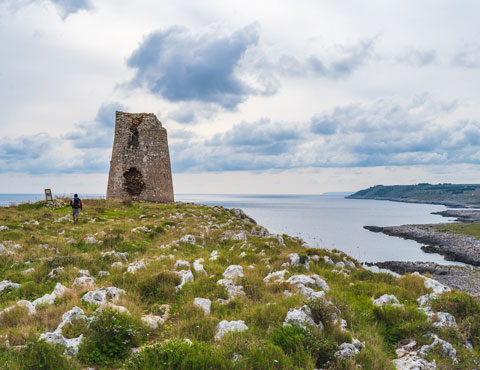